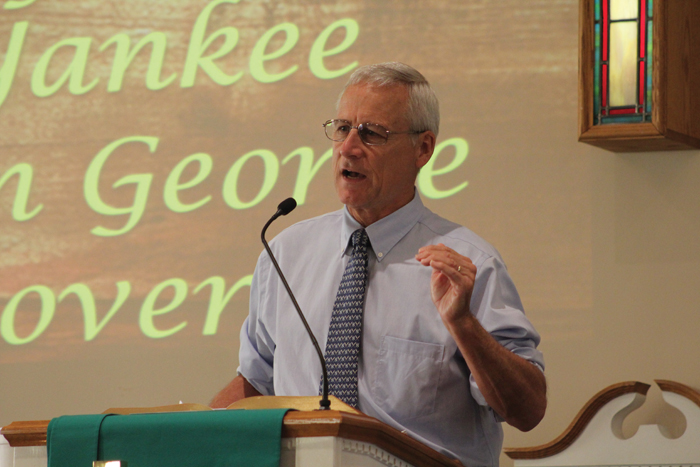 A group of student athletes sat among the congregation of the Arbor United Methodist Church on Sunday to hear powerful words from a man with major league connections.

Both groups gathered with churchgoers to listen to New York Yankee chaplain George McGovern as he gave his testimony in a special community event sponsored by the Rowan-Kannapolis ABC Board.

ABC Board general manager Terry Osborne orchestrated the event, saying the board is required to devote at least 7 percent of its revenue to addressing education.

“When I took over 15 years ago, the County Commission was really upset because nothing was being done about underage issues,” he said.

Now, he said, the ABC Board is bringing a number of speakers and programs into schools from elementary to college.

And speakers don’t just address alcohol or drug issues: they address other widespread problems like suicidal tendencies and other emotional issues, he said.

During his talk, McGovern shared his a personal struggle from his early and late teenage years. He called it his “gone astray” story.

“One of the metaphors scriptures use to describe mankind is that of a sheep,” McGovern said. “Isaiah 53 says this: ‘All of us like sheep have gone astray. Each of us has turned his own way.”

McGovern went on to detail his early teenage struggle with what he called “the world of sexual lust.”

McGovern said his addiction followed him into college — until he received a letter from his then-girlfriend. She thought she was pregnant.

“As I  read the letter, my world began to shake,” he said. “… I was 17, my girlfriend was 16. In no way was I prepared to handle the responsibility of a family.”

After crying out heavenward for help, McGovern said he spotted a poster advertising a meeting in his dorm lounge. It was sponsored by Campus Crusade for Christ.

“The word Christ caught my attention, and I sensed something inside of me prodding me to attend,” said McGovern. “Although I knew I’d be uncomfortable, I felt like I had to go.”

McGovern said that though the meeting was insightful, what most made an impression on him was the peace and confidence of the presenter, a man named Rick.

He wanted what Rick had, he said.

After filling out a card for more information about forming a relationship with Jesus Christ, McGovern was visited by Rick. The two formed a friendship, which resulted in the today-chaplain giving his life to Christ.

One week later, McGovern received another letter. He wasn’t going to be a father after all.

This news and a growing relationship with the Lord changed his life, he said. He began to know that peace that had so impressed him about Rick.

“It was an inner confidence, as if my soul had found a home,” he said. “… I was now motivated to align my life with values according to God’s purpose for life. Worry, anxiety, purposeless living were deleted from my world view. As a result, my sex addiction lost its fuel cell source.”