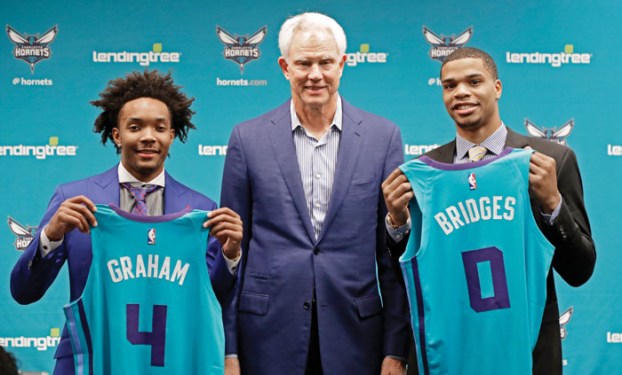 Kupchak said Friday that Walker is “revered” in the Charlotte community, and that he and owner Michael Jordan look at the two-time All-Star as “the focal point of this franchise going forward.”

The 28-year-old Walker has been the subject of possible NBA trade talks as he prepares to enter the final year of his contract with the Hornets. That speculation has amped up recently because it is a practical impossibility for Charlotte to sign Walker to an extension before he becomes a free agent in July of 2019 since the Hornets are so tight under the salary cap.

“I think everybody is aware of the situation, if you follow basketball a little bit, it is unique that he is on an extension that may make it a challenge going forward to figure out before he becomes a free agent,” Kupchak said.

At $12 million per year, Walker well underpaid when compared to the other top point guards in the league.

But that doesn’t mean Kupchak is giving up hope the team can keep Walker in Charlotte.

“I don’t think it is anybody’s goal to lose him in free agency,” Kupchak said. “But going forward, in the community, in the franchise, this is a player that we hope is with us — not only for the next couple of years, but ends his career here.”

The Hornets don’t have much experience behind Walker at point guard.

They have last year’s first-round draft pick Malik Monk and drafted Devonte Graham from Kansas in the second round on Thursday night.

Graham said he is excited to pick Walker’s brain when it comes to basketball.

By David Shaw sports@salisburypost.com KANNAPOLIS — It is four games into a 10-game Southern Division schedule — and Rowan County... read more