Letter: Equal treatment under the law is an American ideal 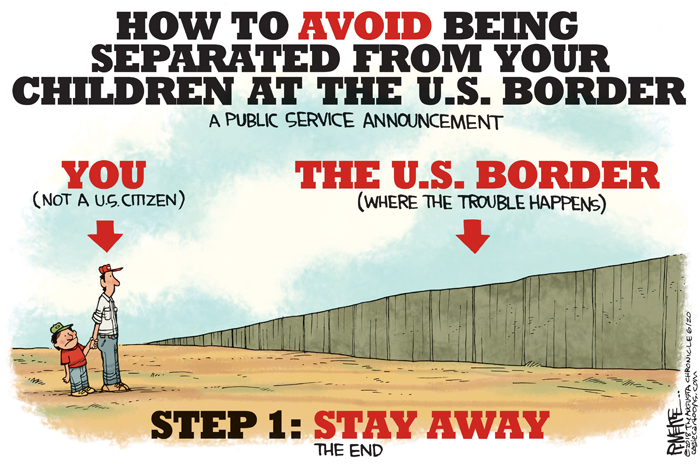 The compassionate American soul is evident in the concerns over the Trump policy of separating children from parents who are violating the law by illegally entering the U.S. The American ideal of a nation of laws and equal justice is evident in the zero tolerance policy applied to illegal immigrants because selective enforcement cannot be the standard for a nation of laws and equal justice.

Politically correct euphemisms have clouded over the clarity of social discourse. Yes, I am not politically correct. I didn’t use the euphemism “undocumented.” That is like referring to a burglar being “without immediate proof of ownership.”

It is not a question of forgetting to bring the paperwork or not having filled out every page. Illegal immigrants knowingly violate the law for whatever reason they felt justified it.

Some seem to say that such familial separation is horrible for those caught violating the law by illegally entering the country; however, they don’t seem to be concerned about Americans whose families are sundered when caught breaking the law.

They say illegal immigrants are escaping gang violence, domestic abuse, political oppression and other issues, which justifies the illegal and unnecessary behavior. (If you have a legitimate need, I believe existing law says go to any port of entry and directly apply for asylum.)

Those American families are separated when the parents are arrested for their crime. Why is violating the immigration laws any different? That is not equal treatment under the law.

Letter to te editor: May 17

John Hood: Why are you reading this?