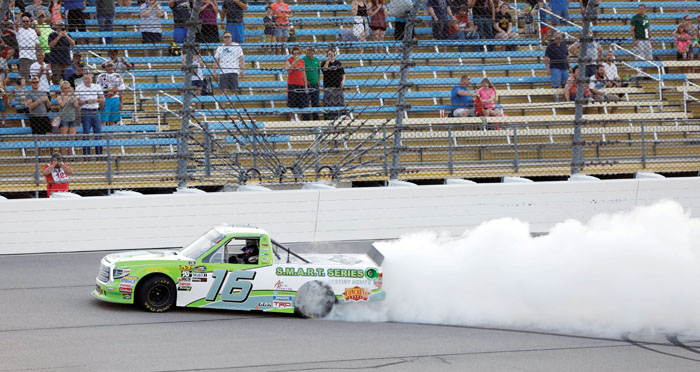 By LUKE MEREDITH, AP Sports Writer
NEWTON, Iowa (AP) — Brett Moffitt bolstered his breakout season with a stirring win on his home track.
The Iowa driver hopes that winning yet again — after fighting off a thrilling late move by Noah Gragson — will help him find the sponsorships he needs to keep it going.
Moffitt won the NASCAR Truck Series race Saturday night at Iowa Speedway. The 25-year-old from nearby Grimes led 76 laps for his second victory of the season in the No. 16 truck.
Moffitt started 16th, the lowest spot on the grid for a race winner in 2018.
“This is everything,” said Moffitt, who said earlier Saturday that he still hasn’t lined up sponsors to race at Chicagoland on June 29.
Gragson was second after nearly executing a self-proclaimed “video game” move on the final lap.
“It was all about hitting your marks and hoping (Gragson) wouldn’t be able to pass us, and thankfully he wasn’t. Well, he did — but not for long,” Moffitt said.
Gragson dipped low and briefly passed Moffitt on the last turn of the race. But Gragson’s bold effort proved to be too aggressive, sending him into the wall and allowing Moffitt — who kept his truck steady — to cross first.
“I closed my eyes, crossed my fingers and hoped for the best there,” Gragson said.
Harrison Burton was third, followed by David Gilliland.
Johnny Sauter, who was seeking his third straight win, was fifth. Sauter’s lead in the standings dipped to 71 points over Gragson.
John Hunter Nemechek and Stewart Friesen, the first two stage winners, were caught in a multi-car wreck early in the final stage that knocked each of them out of contention.
Burton, the 17-year-old son of former Cup driver Jeff Burton, won his first career pole earlier Saturday in just his 10th start — helping to give Kyle Busch Motorsports three of the top four spots.
Todd Gilliland, who started fourth for KBM, drew the first caution when he got loose and slid into the wall midway through the opening stage. Another wreck led to another restart, and that’s when Matt Crafton jumped ahead. But Nemechek slid past Crafton late in the first stage, and he ended up winning it.
Friesen, who won the pole and finished second at Texas last week, grabbed his first lead early in stage two. Friesen kept the lead on a late restart to take the stage.
But with 63 laps to go, Nemechek, Friesen and Crafton — who entered the race in fifth place — got collected after Crafton blew a tire, and Moffitt took control from there.
Moffitt then used his post-race forum to reach out for potential help for his team for the rest of the year.
“We really need some more sponsors on this truck and let us run for a championship,” Moffitt said. “We’re not the biggest team, but we proved (Saturday) we’re the best.”
Gragson led just seven laps — but his night will be remembered for his daring effort to try and make it eight at the end.
“It was entertaining, that’s for sure,” Burton said. “Hats off to Noah for trying it.”