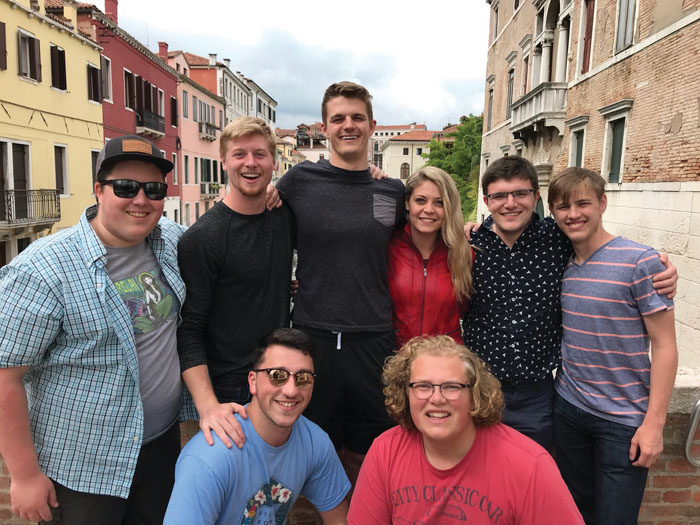 Corbin (back center) in Venice, seeing the sights with his song mates.

“I just knew music would make me happy. I consider myself to be a religious guy, and I feel a need to change people through my music. It’s more than entertainment. It’s a human connection. When you sing a song, you know you are not alone. This is relatable. It’s life.” — Corbin Elliott

It’s always a delight to hear young people talk about their plans and dreams. Corbin Elliott’s dreams just may take him all the way to Broadway — and those who know him best say he has the talent and work ethic to get him there. 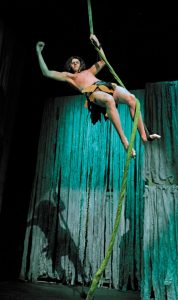 In PPT youth production, Corbin swings across the stage as Tarzan. Photo by Wayne Hinshaw, for the Salisbury Post

He’s sung with the North Carolina Opera, and he’s sung throughout Europe as a college freshman with High Point University’s Chamber Singers. In July, he’ll attend a summer program for voice in Austria with the American Institute of Musical Studies (AIMS). It’s the number-one training program in Europe for rising opera stars, and he’ll likely be the youngest attendee there.

The son of John and Rhonda Elliott, Corbin has taken advantage of every opportunity that’s come his way, ever since his mom suggested he audition for “Thirteen” in 2012 at the Norvell. She simply thought he would enjoy doing it.

He did, and went on to other productions. He continued in chorus with Dean Orbison at East Rowan High School, and Carson’s Alex Reynolds approached him for the Shrek role.

That was the toughest role for me production wise,” Corbin says. “Singing in a Scottish accent created tension on my voice.”

He lost 30 pounds wearing a latex cowl over his face and a fat suit. During breaks, fellow students used hair dryers to blow cold air into his costume.

In the very next production, he went from “lots of clothes to no clothes,” playing Tarzan at the Norvell.

“It was awesome honestly,” he says of his scant wardrobe. “I felt, in the best way, so free.”

He only had one “wardrobe malfunction” with his loincloth, when it became detached in a fight scene with a leopard.

“I had to catch it and strap it back on, but no one noticed,” he says.

He also had to sing the show’s biggest ballad while putting on a suit, timing every article of clothing with precision.

Early on, he knew he wanted to pursue singing as a career.

“Right after I got into high school, I was having a lot of success,” he says. “I just knew music would make me happy. I consider myself to be a religious guy, and I feel a need to change people through my music. It’s more than entertainment. It’s a human connection. When you sing a song, you know you are not alone. This is relatable. It’s life.”

For college, Corbin wanted a small school with a good music program. A friend recommended he visit High Point University, and he liked the fact that he’d be a student, not a number.

With North Carolina Opera, he sang in “Cold Mountain,” “Rigoletto,” and “Sampson and Delilah.” He carpooled to Raleigh with his voice coach, Dr. Scott MacLeod, who also happens to be the opera’s chorus master. MacLeod recruited Corbin to sing with the opera.

He spent his second semester freshman year abroad, traveling with 15 students to Prague with Dr. Marc Foster, Music Department chair and director of choral activities at High Point University. From there, they spent five months singing all over Europe in some 20 countries.

“We sang at Bach’s church on Easter Sunday,” Corbin says. “It was an incredible opportunity for me, especially as a freshman. We had a following after a while.”

In May 2018, the Chamber Singers were joined by other vocalists for an 11-day visit to Italy, where they performed in Rome, Florence and Venice.

“We sang at the Vatican during mass and at the Pantheon,” Corbin says. “It’s an amazing experience to see how music can reach people even though they don’t speak your languages.”

The group, again led by Foster, sang during masses and at its own concerts.

The trips, Corbin says, “shaped me as a person. My viewpoint of the world was tiny. Travel gave me an understanding of different cultures, and reinforced what I want to do.”

Corbin is a music major with a concentration in voice and a minor in entrepreneurship. He would like to perform and travel, and then perhaps teach. And yeah, he wants to be on Broadway.

“I’m very ambitious as far as that goes,” he admits. “My priority is changing the world in little ways, to make this place more like heaven and share joy. When you see a play, you’ve got two hours away from your problems. It’s good for your mental health, and it’s good for you.”

As a high-school senior, Corbin was selected to sing at Carnegie Hall. “The Wizard of Oz” — he was the Tin Man — was his last Norvell production. But he calls the AIMS program “my biggest break yet.”

“It makes me ridiculously happy to go,” he says. “I want everyone else to be better than me so I can rise.”

Corbin has lots of people cheering him on in Salisbury and High Point.

Orbison isn’t surprised in the least with Corbin’s success.

“It’s a God-given talent,” he says. “It was very obvious. It is very exciting for me to see my students succeed. I have 10 or 12 former students who are teaching music, and one who is auditioning on Broadway. Those things are just special to me.”

Gwen Matthews worked with Corbin as a director and choreographer at the Norvell. She also teaches theater at North Hills Christian School.

At the Norvell, Matthews says, “Corbin learned how to be comfortable on stage. He’s been given a beautiful voice. He was willing to take on any role, and was efficient in what he did. He was a leader and a joy to be around. I appreciate everything he contributed. I just wish him the best. I have always thought I’ll see him in a professional atmosphere, and I’ll go backstage and maybe he’ll remember me.”

“Corbin has talent, but more importantly, he has a fantastic work ethic,” Foster says. “Corbin works really hard. He takes initiative and he takes advantage of opportunities. He is supremely talented, and he has a gorgeous instrument. But his talent and work ethic will get him over the top.”

He adds, “I wish I had a program filled with students just like him. He’s just a great human being.”