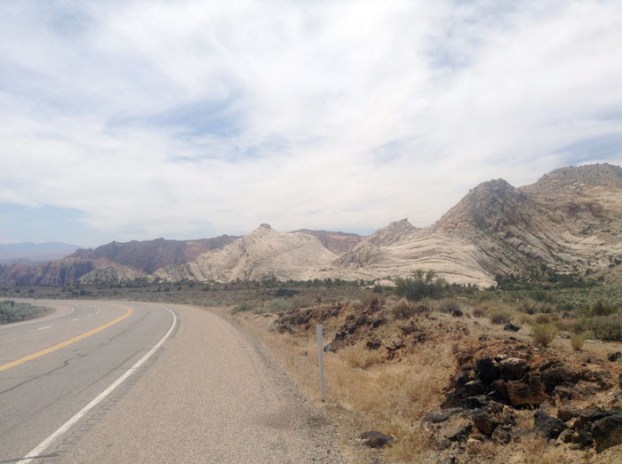 Good roads,amazing scenery and a wonderful adventure in Nevada and Utah. David Freeze

David Freeze: 15 days of traveling is not enough in Nevada and Utah

It doesn’t happen often, but when it does, I have to do something about it.

Nevada and Utah both are about dry climates that are hot in summer and cold in winter. Initially, I thought 15 days of intense cycling and running and a couple of days in a car would be enough. Well, it just wasn’t enough at all. You will see my remedy at the close of this writing.

What I did see made a long list. Running the Reno/Tahoe Odyssey with awesome team members was fun and a wonderful challenge. It was my first long-distance relay and worth returning to do again. The hills were even fun, but maybe it’s best not to say too much about that.

Then a couple of days of sightseeing by plane and car in the Carson City area netted a flight to Edwards Air Force Base and most of a day in Virginia City. There was certainly plenty to see and do. All the gold and silver history along with Mark Twain were better than the present-day gunfights, but all of it was fun. I particularly enjoyed seeing the F-35 fighter jet up close.

After a presentation to the Mission Senior Living Leadership group last Tuesday, I set out on my bike to experience the two states. U.S. 50 was way better than I expected as the “Loneliest Road in America,” and the long gaps without supplies were not nearly as bad.

Sure, the rides were significant between towns and supply points but I already know that there are way worse places, some I have already been too.

The Pony Express route added plenty more history. Rock formations and mountains, most bigger than Mount Mitchell back home, seemed endless. I can’t remember so many significant mountains on any given route during my earlier travels.

Then Utah kept on with the mountains and added more colorful rock formations. Peaks, summits and passes were the order of every day. But so were some flat roads, often with the prevailing tailwind.

The nights were chilly as is often the case in the desert. The days were comfortable, even at 103 degrees in St. George. I never saw any rain and just caught a glimpse of a few distant clouds. I nailed perfectly the motel choices and got every story and photo submitted on time because of them. The one exception was using the Eureka Volunteer Fire Department WiFi, just across the street from my motel.

I didn’t meet as many people as I usually do. Simply put, there were fewer people on the roads. One paving crew on State Road 387 told me that they had only 15 cars pass through in three hours. The roads were always excellent, many with wide shoulders and occasionally a bike lane. Farm and livestock trucks seemed to make up about half the traffic.

There were no real problems, and the one flat tire generated a conversation with Larry Whitaker that answered a lot of route questions for me.

The most memorable motel conversation with Lola came about because she saved me a room at the Ruby Hill Motel in Eureka, a town that didn’t have any other motel rooms available. And hearing her sing “My name is Lola” was the most fun part of the day.

With 47 states complete, I plan to visit Vermont this summer and complete 48. Hopefully, Alaska and Hawaii come next year. The Nevada and Utah ride will net about 620 miles, an exact total to be determined when I get home after adding up the daily mileage.

My only regret is that there is so much more to see in these two great states. I plan to return next year and rent a car and go see Bryce Canyon and Zion national parks and many more places that were on my original list.

My thanks to Darryl Fisher and Mission Senior Living for hosting me in Carson City and Dayton, Nevada. I couldn’t have asked for more from such gracious hosts.

These bicycle trips are unbelievable and rewarding in ways too numerous to mention. If you followed this ride, I am glad you did and hope you will ride with me again when the next one develops.

And as always, thanks for riding along! You are always welcome.