David Freeze: Everything comes together for a strong finish 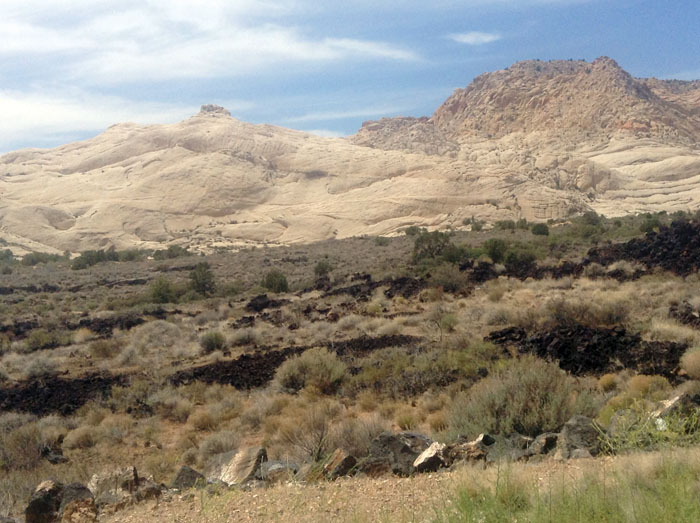 Several dormant volcanoes were along the way as Freeze neared St. George, Utah and the end of the line. The black piles are lava rock. David Freeze

I just had a monstrous pineapple milkshake from a place called the Iceberg in St. George, Utah. It was a funny pineapple, more of a red tint to it. Must be a Western thing.

Just as nearly everything came together Wednesday as I hoped it would, the Iceberg was right across the street from the Dixie Palm Motel, another in a long series of wonderful choices on this trip.

I am going to try to remember nearly all the things that helped ease my concern when I found out that the most direct route to St. George was not an option. I kept researching Tuesday night and used all my sources to try to find the quickest route, knowing that there would be some more challenging mountains early and real heat the closer I got to St. George.

Up at 4:15 a.m. Wednesday, I had decided to take a couple of chances early on. One of them was to ride for nearly an hour in the dark to get an early start. My red flashing light was working well, and I knew where to go early.

With all the talk about the impending heat, I was shivering cold before the sun made its appearance. It is simply amazing that the nights can be so cold and then it warm so dramatically during the day.

I had dreaded the southwest wind, meaning a headwind on the way to southern Utah. The first surprise was that the wind was more of a north wind early, pushing me and probably making it colder.

With the wind behind me, the first 10 miles in the dark flew by. Just as the sun came up, I began to climb the first mountain of the day on State Road 56. All the bike shop guys had told me to take 56 to State Road 18 and then follow it all the way to St. George.

I found a road not shown on the Utah map called State Road 144. It was called Pinto Road and the result would be about 11 to 13 fewer miles but it would be on dirt. But was taking a dirt road a good option?

With things going well early, I took a chance on Pinto Road and after a couple of miles kicked myself for doing it.

The first part was very much up and down, with a very rough and rutted road as it entered Dixie National Forest. The dry and loose dirt was hard to pedal in and nearly pitched me off the bike a few times.

While in Iron County, the road could not have been much worse but it changed to Washington County and became much better maintained. Still not easy, but much better.

My best gift of the day was a sign that said that only eight more miles of the bad road remained. Two climbs over big mountains were the end of that, but the sum total was about 12 miles saved from the more circuitous route. I did hate to see a vehicle coming toward me with all the dust flying, Only a few came by.

My turn to the south on paved State Road 18 put me squarely facing the wind but with plenty of downhill to come. I stopped at the Mountain Meadow Massacre site along the way, a historical site that I had not heard of. In 1857, Mormon militiamen and Paiute Indians massacred nearly all of 147 settlers on their way to California. Only 17 small children survived.

In the mostly downhill ride that dropped roughly 3,000 feet in elevation, I stopped to get a cold drink and some ice from Nancy Glose at Outlaw Bakery and Mercantile Store. The day was getting hot quickly and a few challenging climbs remained. Nancy told me about some of her travels and knew plenty about the hilly U.S. 50 in Nevada.

With amazing scenery causing stops multiple times for photos in the last 10 miles, I totally enjoyed the last part of the ride. Downhill and again with a tailwind, I found the a grocery store, Dixie Palm Motel and Bicycles Unlimited all within about a mile.

Craving watermelon in the heat, I made room in the bike bags and then found the motel and checked in. A certain amount of clothing and gear would be shipped home with the bike.

As soon as that gear was ready, I went to see Nate at Bicycles Unlimited and enjoyed talking with him. Nate had advised me on the route for the day and will ship the bike home after 70 miles pedaled on the last day’s ride.

I went straight for the milkshake and some other food, both to celebrate the nine days of safe riding and how Wednesday came together. To top off the day, I got to watch the Yankees on ESPN in a fine room and rest my mountain climbing legs.

Friday’s story will be a recap of all that has happened in Nevada and Utah. I will be going back to Nevada for a day before flying home Friday.

Thanks for following along, sending prayers and all the support. See you tomorrow!