David Freeze: The calm before the storm 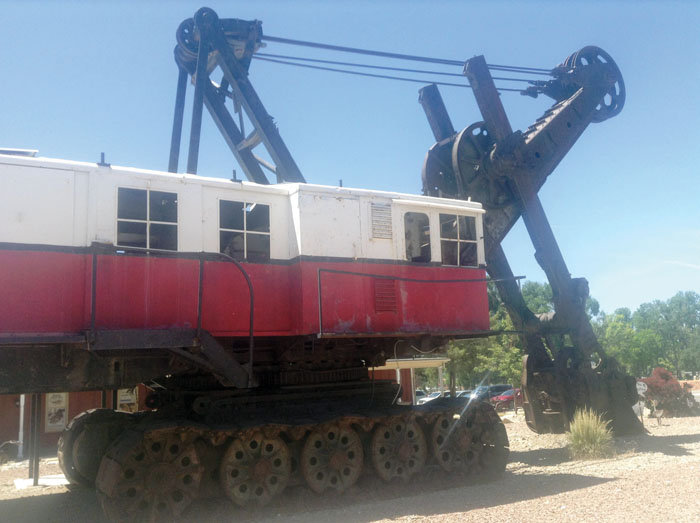 This massive electric powered shovel was used to dig for iron in the Cedar City, Utah area. The bucket is the size of a small pickup. The electric power came from cables to a generator. David Freeze

Tuesday was an easier day, and I even slept until 5 a.m. Felt good, too!

I expect a not much harder day today when I finish up this adventure. But all the right people have told me that it is going to be much tougher than I thought. More on that later.

I spent the night at Hudson Inn in Milford, a nice motel with shaded parking for all those with cars. That was on the tail end of three mountains and 84 miles.

I had two big ice cream sandwiches and still was quite hungry. The motel had a restaurant, and it closed at 8 p.m. I arrived at 7:50 and got two egg, tomato and cheese sandwiches to go. The bag must have weighed at least 4 pounds when I carried it to the room. The food was great, and the restaurant was still taking orders over the phone at 8:10 when I left.

It takes a little while to get daylight here, so 5:30 might be the earliest to see and be seen, but I left at 6 a.m. After I turned onto State Road 129, the flattest road I have seen in a while, I had just begun to roll when the back tire went flat.

Several people stopped to see if I needed help. but only Larry Whitaker stopped for a good conversation. He has been riding his bike for 30 years on the same road and knew plenty about the other roads around the area.

Larry was the first to tell me that I couldn’t ride on the interstate and that the most direct route otherwise to St. George included a 10,000-foot mountain. Larry said the best route was to go west to Enterprise and then turn south.

The conversation with Larry could have gone on for hours, but he knew that I needed to fix the tire. After that task was completed, I got back on the road.

Minersville was the only town I passed through Tuesday. Minersville was founded by Brigham Young in 1859 so that his followers could operate a lead mine.

About seven miles later, I topped the only mountain of the day at 6,570 feet. This one had no name and was just posted as Summit at the top.

I already had a great deal at the El Rey Inn in Cedar City, the biggest town that I have seen on the trip. The town was also founded by Mormon pioneers, this time in 1851 to open an iron works.

Cedar City is only about 20 miles north of the Mojave Desert but its elevation of about 5,500 feet keeps it cooler.

I finished Tuesday only about 52 miles from St. George, Utah, by interstate but this part of Utah does not allow bikes on the interstate.

The deduction of this fact and information from Larry and two bike shops in St. George is that I have close to 90 miles to ride today. I am taking the nearest route that is possible and will have some hills but will be on what I have been told are considered back roads.

St. George is nearing 100,000 people and the seventh-largest city in Utah. It is also boiling hot, actually being on the northern edge of the Mojave Desert. I will likely be facing a south wind and riding toward 106 degrees for the predicted high. So, today will be big.

Tuesday’s other highlights included seeing three alpacas in the morning, at least that is what I think they were. The downside was seeing and smelling three separate dead cows along the road. With all the vast acreage, I wonder if they were hit by cars or trucks. Lots of beautiful hay farms have been scattered along the way as well.

So say an extra prayer that all goes well on the longest ride of my Nevada-Utah trip. I will report on the challenge Thursday.