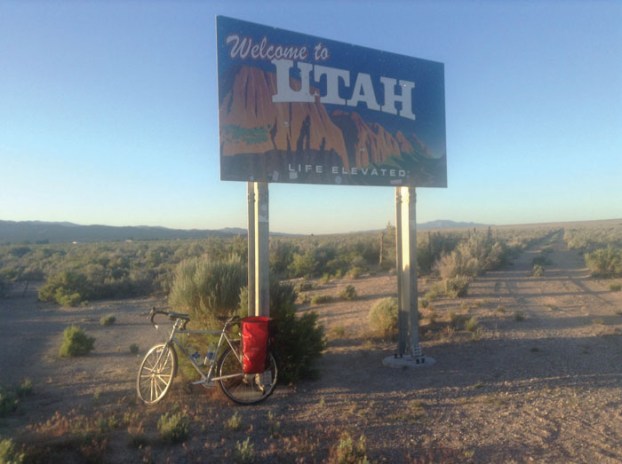 The time changed from 5 a.m. to 6 a.m. when Freeze crossed in Utah and achieved his 47th cycling state. David Freeze/for the Salisbury Post

Although my room at the Whispering Elm Lodge on Sunday night in Baker, Nevada, was wonderful, I didn’t sleep too well.

The most challenging day of this adventure was staring me squarely in the face. Three mountains and 84 miles without the first supply point and building heat. The time change from Pacific to Mountain seemed to cut an hour out of the day, and a headwind was already going when I got ready to go Monday morning.

One of the women who works in Baker’s only store told me that there is not a thing between Baker and Milford except a lot of ups and downs. I already knew that from the map but still expected to see something interesting. That part worked out.

I started with plenty of water and snacks and all the clothes I could put on. The predawn temperature was about 48 with a breeze, so I was very cold to start. Since I was pedaling southeast, the sunrise was to the left over the always present spectacular mountains.

After six miles, I crossed into Utah for my 47th cycling state and also got a picture of the Nevada sign. Both are very well done, as are both states’ roads.

Just after the Utah sign came Garrison, a more or less ghost town that had absolutely nobody moving and no businesses.

This part of Utah has lots of green grass, several beautiful lakes and plenty of beef cattle. There were large herds of cattle grazing on the abundant green grass, something I had seen little of so far.

The ride was all uphill to start as I passed through Morgan Gap and then up to Halfway Summit at 6,309 feet.

After that climb came one that looked hard but didn’t turn out to be. When cresting Halfway Summit, I could see 20 miles away that the same road went down in a valley and then climbed right back up through a set of spectacular mountains.

My ride down was easy, and the headwind was manageable. Once my climb started on the other side, I noticed a solid trail of cow manure of the kind that can only be dribbled out the back of a livestock trailer.

Flies were feasting on the manure and began to attack me too. Pedaling uphill at 5 mph gave them plenty of opportunities to land and occasionally bite. I rode and slapped.

Next came the best part of the day when Lauren Graham of New Orleans stopped to give me some cold water. The day had ceased to be cold and was now quite warm.

Lauren was in the area for AmeriCorps and had just visited Great Basin National Park, where I was Sunday.

Farther up toward the top of the climb, a cow herd was grazing along the road. The open grazing had been listed often on signs, but this time the cows were confidently walking across the road, and one laid down in it. They didn’t seem concerned about me, and I grabbed a few photos and kept going.

Wah Wah Summit was 6,723 feet and very reasonable to climb.

At the top, I got almost an exact duplicate of the view for the next climb. As I started downhill, I could see road construction going on and the flagger stopped me. Lexie Winder told me that I would have to ride in a truck because it was too dangerous to cross the area on a bike.

Jason Catella arrived and agreed that I could just walk around the paving and stay on the dirt. I enjoyed talking with them both and headed down a very long hill into another valley. Riding across the new tar and gravel pavement was a little harder than usual, but not a big problem.

What was a problem was the incredibly long and steep uphill heading toward Frisco Summit at 6,460 feet. This one beat me up more than the others, and it seemed like I could never get to the top. Finally, I did and passed the historical marker to Frisco, another especially rich boom town that has since disappeared.

From the top, I mostly coasted downhill into Milford, a pleasant little town. Anything looks good after a very hard 84 miles and more climbing than may have ever done in a single day. With no dairy bar in sight, two big ice cream sandwiches did the job. I planned to go out for more once this story was submitted.

There was a restaurant at the Hudson Inn, and i had another jackpot room for the right price and quality.

Today will not be as challenging as Monday. Supplies won’t be an issue either as I head for St. George on Wednesday. I have noticed that St. George is way hotter than anywhere else in Nevada and Utah. Lexie at the road paving project told me that it will always be 1 degree hotter than hell.

With that, join me again for the next-to-last day of riding. It was good to have a few conversations, and I did not expect any trouble sleeping Monday night.

Deputy humbled by prayers through Shield a Badge With Prayer program