David Freeze: A shorter day Sunday leads to a big one today 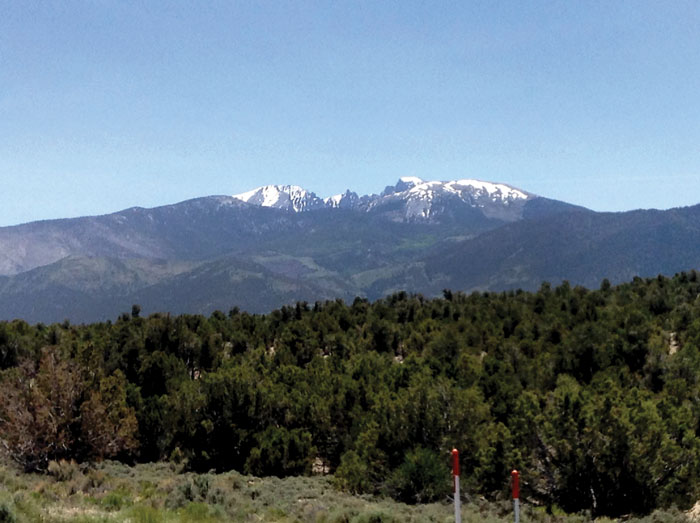 In the Great Basin National Park, Wheeler Mountain is on the right at 13,063 feet and Jeff Davis Peak is on the left at 12,771 feet. The park is adjacent to Baker, Nevada.

Baker, Nevada, has about 68 residents, not counting those like me who stop by for a day or two.  Baker is right in the middle of what is called the Great Basin. In fact, the National Park by the same name is right next door. The park is dominated by Wheeler Peak which can be seen for about 50 miles.

Baker is also the jumping off point for my trip to Milford, Utah. That trip will be about 84 miles with no supply points, meaning that I will climb two more mountains with what I can carry. It’s going to be fun. I bought some things at the local store this afternoon, and it didn’t have much. They did make a good veggie sandwich though. I have plenty of water which is most important.

After spending last night in the El Rancho Motel in Ely, with its own neon sign which I loved, I left out with a chilly wind and not enough clothes as the temperature dropped to 44. No towns were on the route today but there was an RV Park. Today was my last day on U.S. 50, as the map called for a change to S.R. 487 just before Baker. Total mileage was 63 miles and two more peaks were climbed along the way. The Sacramento Pass at 7,154 was the hardest one but the Connors Pass was way taller at 7,722 feet. Views from the top of both were awesome.

Along the route this morning was the Ely Elk Park, an unusual viewing place where elk can usually be seen. Of course, I missed them all and hope to see some later. There was also a wildlife refuge with a large pond, full of ducks and birds. Very little traffic was out this morning.

I did stop for every historical marker along the way and all were about small towns that sprang up for gold, silver or mineral mining. Most had a boom period of several years and then went away and are deserted now. Ward and Osceola were the two most successful.

The Great Basin National Park has the dramatic peaks and the popular Lehman Caves which happened to be sold out today for ranger-led tours. I toured the visitor center this afternoon which is right on the edge of Baker. Most of the park, including the snow-covered peaks, are miles away.

Another unusual thing about the area and Baker that I found interesting is how they do the schools. There are only a few hundred residents of the extended area and many of them are out on far-flung ranches. The kids all start school in nearby Utah for K-2, then come here for grades 3-6 and then return to Utah to finish through high school.

Three days of riding remain, including tomorrow’s trip to Milford. Following that, I will have two days to make it to St. George, Utah. I will get a private flight from there to Carson City on Thursday and a flight home from Reno on Friday.

And of course, I will get my 47th state tomorrow when I cross into Utah just about seven miles away. I plan to leave really early because Utah is on Mountain Time, just two hours different from home instead of three. The guys at the Post will like that. I will too, after the first day.

Tall Tale Tellers Festival a “preservation of history and…