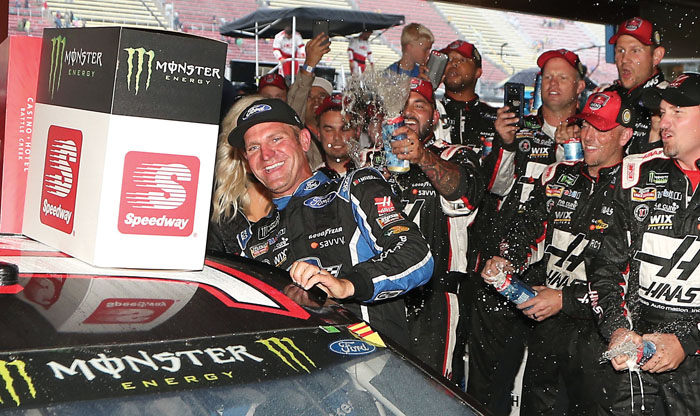 BROOKLYN, Mich. (AP) — After 120 laps and two stages, the race could now be official. Any driver in the lead might conceivably win if rain intervened.

Clint Bowyer had finished second to teammate Kevin Harvick in the second stage, and both came to pit road. Bowyer took only two tires — and felt that decision by crew chief Mike Bugarewicz ultimately won him the race.

“It was a gamble on his part,” Bowyer said. “It was uncharacteristic for him. That’s part of growing and blossoming as a crew chief and being one of the elite.”

After that quick pit stop, Bowyer had outside position on Harvick on the ensuing restart and was able to take the lead. Rain halted the race not long after that, giving Bowyer his second NASCAR Cup Series win of the year.

Blaney won the first stage and Harvick took the second. On the pit stop moments later, Bugarewicz made the decision to go with only two tires, figuring other leaders would do the same, since bad weather could arrive shortly and track position was important.

Bowyer didn’t have to race much longer in his No. 14 car. He had the lead when Ricky Stenhouse Jr. went into the wall, bringing out a caution. The rain put a stop to the race after 133 of the planned 200 laps on the 2-mile track at Michigan International Speedway.

“As the leader, you don’t want to be that guy that’s calling in every single second saying, ‘It’s pouring! It’s a monsoon!’” Bowyer said. “That doesn’t hold any weight, but it really was. I was just hoping somebody else was saying the same thing.”

The race was delayed by rain at the start. Three Joe Gibbs Racing drivers — Kyle Busch, Denny Hamlin and Erik Jones — had to start at the back because of inspection failures related to the splitter. Busch made it back into the top five, Hamlin finished 12th and Jones was 15th.

Harvick led a race-high 49 laps and secured his 11th top-five finish in 15 races this season. Bowyer led only eight laps. This was his 10th career victory and first at Michigan.

“I’ve been on both sides of this,” said Harvick, who was denied another chance to overtake Bowyer by the weather. “If you’re going to have racing luck work against you, you want to at least stay on your own team.”

Kyle Busch kept the points lead, by 75 over Harvick.

The 1-2-3 finish in a Cup race was a first for Stewart-Haas Racing, and the first time any team had pulled it off since Roush Fenway Racing swept the top three spots at Dover in September 2008 — with Greg Biffle, Matt Kenseth and Carl Edwards.

“To finish third, rain-shortened, of course you always want to go back racing again, but to see the two cars in front of me at the end, the 4 and the 14, that’s a big day for Stewart-Haas Racing,” Kurt Busch said. “It’s very special to finish 1-2-3.”

Kyle Larson, who had won the previous three Cup races at Michigan, finished 28th after spinning onto the grass during the second stage.

The Cup Series takes next weekend off before resuming June 24 at Sonoma.