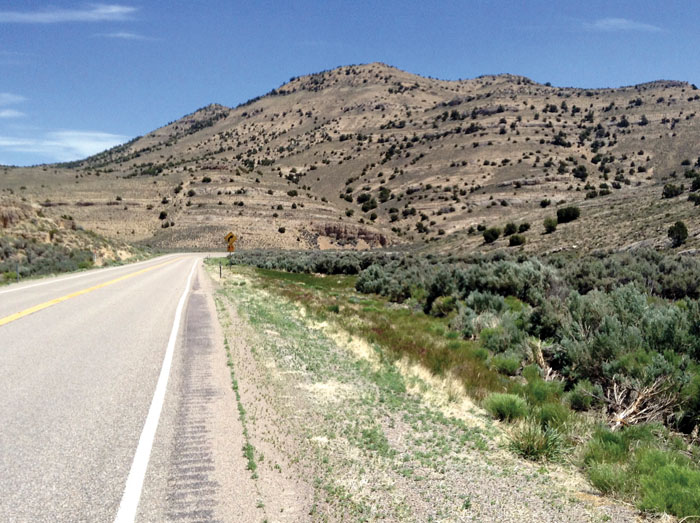 Late in the day, these buttes were prominent as Freeze headed to Ely, Nevada. Photo by David Freeze, for the Salisbury Post.

After a great night in the Ruby Hill Motel, I woke up with a plan to head out early. My idea was to get ahead of the serious winds that were forecast, all set to be on the road by 5:30 a.m. I had all my supplies from a pricey convenience store across the street and plenty of energy. I had four summits to climb, the first beginning just out of Eureka.

A little more about Eureka. The folks there are trying to sell the town as really trendy and want everyone to believe that people just can’t wait to visit. Maybe some are, but many of those in the motels last night live there. Eureka was a silver mining town, beginning in the 1860s and ending in the 1880s. Lead was also a major product, with Eureka being one of the largest producers in the world. The population was once as high as 9,000 residents.

I spoke to the lady in a knickknack shop, the owner of one of the motels and the library manager. None of them were very helpful when it looked like I didn’t have a room, but the star of the evening was Lola from the Ruby Hill Motel. She went the extra mile so that I could have a wonderful room last night, see the NBA Championship and have a comfortable night’s sleep.

With that I headed east from Eureka and climbed the Pinto Summit early at 7,376 feet, then the Pancake Summit at 6,517. Both of these went pretty well. A manageable headwind was present but not a real concern. I saw Mark Kolding again in between those summits and he told me that his plan was to make it to Ely, rest a little while and then ride on to Majors Junction. Mark has to make up some ground to see his girlfriend in a few days, so he is hustling. When we saw each other, the wind had not yet become ugly.

I didn’t see anyone else and proceeded to climb the Little Antelope Summit at 7,438 feet. This came after seeing my first ever antelope run across the road in front of the bike and finally crawl under a fence. I was happy with that climb and always look forward to the downhill coast on the other side. Oddly enough, the wind was up and caused me to have to pedal to keep a decent pace downhill. Big gusts sporadically hit me in the face, but it all eased off once I got down the mountain.

Things got challenging next when I made it to the top of the Robinson Summit, the biggest climb yet at 7,607 feet. I was quite happy to have climbed this one and stopped to celebrate at the top. A wind gust blew the bike over and broke the clamp that keeps the handlebar bag on the bike. I should have been watching but didn’t expect anything like this. The handlebar bag holds my “need to reach quick” things like wallet, iPad and phone.

Coming off the Robinson Summit, I got more than I expected. The wind was blowing gusts straight at me. There was no coasting going down. This time, once near the bottom, I turned into a fierce wind of probably 40 mph. While on downhill or flat ground, I could only pedal 5-6 mph and should have been able to do 12-15 mph. The wind was thundering in my ears and miserable to pedal against, I had 18 miles remaining to Ely when I came off the summit and should have been able to do it in 80 minutes. The battle against the wind, which twice was so strong that I had to stop, lasted two hours and 40 minutes.

Finally, I made it to Ely and heard from Mark that he was resting in town somewhere and was going to try to make his next stop in the late evening. Hopefully the wind will die down some.

I plan to go from Ely to Baker tomorrow with only two climbs although one will be the highest yet. This will be my last full day in Nevada before heading into Utah and state No. 47 early on Monday. I have already bought a pin for my cap that says “I survived U.S. 50, the loneliest road in America!” I hope nothing was premature with that assessment.

I will admit to being mentally and physically tired after battling the wind this afternoon. Only two other times have I faced such winds and I hope this will be the last. I will be here tomorrow for a report on all this. See you then!

West Rowan High graduation: ‘Failure is not a setback,…