UNC one win away from College World Series 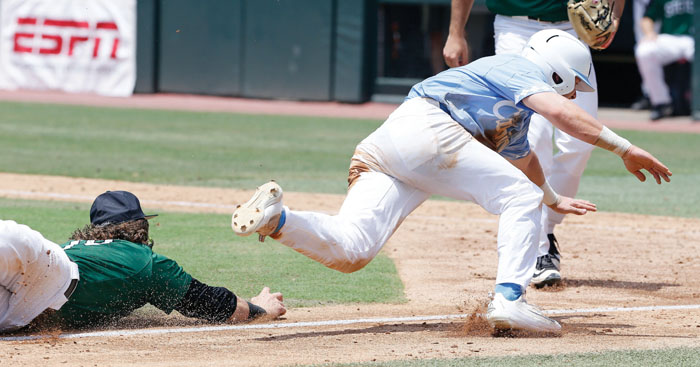 AP Photo/Gerry Broome ... North Carolina’s Ike Freeman, right, is tagged out at home plate after being caught in a run down as Stetson infielder Jonathan Meola dives to make the tag during the sixth inning of Friday’s super regional baseball game in Chapel Hill. Freeman is a former East Rowan High School standout. The Tar Heels won, 7-4.

The host Tar Heels (42-18), the No. 6 national seed, can clinch their first College World Series trip since 2013 by winning Saturday’s Game 2.

Roberts’ shot against Hatters ace Logan Gilbert came with two outs in the fifth inning to break a 1-1 tie. Michael Busch added a two-run shot in the seventh after Stetson closed to within 4-3.

Mike Spooner hit a solo homer in the first for Stetson (48-12), but the No. 11 national seed went 1 for 11 with runners in scoring position.

Gilbert (11-2) took the loss. The No. 14 overall selection in this week’s Major League Baseball draft lasted 5 1/3 innings, matching his shortest outing this season.

No. 3 national seed Oregon State and Washington won their openers in the NCAA Tournament best-of-three super regionals Friday and each is one win away from advancing to the College World Series.

Luke Heimlich turned in another strong performance on the mound and Trevor Larnach and Adley Rutschman hit back-to-back home runs in the first inning to lead the Beavers to an 8-1 win over Minnesota in Corvallis, Oregon.

Oregon State is on the cusp of a second straight trip to the CWS in Omaha, Nebraska, and sixth since 2005. Heimlich turned in a dominant performance four days after he was not selected in the Major League Baseball draft for the second straight year.

The two-time Pac-12 pitcher of the year appeared in a super regional for the first time. Last year he missed super regionals and the CWS after The Oregonian newspaper reported he had pleaded guilty to a child molestation charge when he was a minor.

Minnesota, in its first super regional, managed only four singles against Heimlich through seven innings. Toby Hanson homered leading off the eighth for the only run against Heimlich, who had struck out nine and walked none when he left with two outs in the ninth.

Stetson ace Logan Gilbert went 5 1/3 innings, matching his shortest outing of the season. Gilbert gave up the homer to Roberts, the third off the Seattle Mariners’ first-round draft pick over his last 10 innings.

The Hatters batted .311 and outscored their three regional opponents 29-7 but were just 6 of 33 (.182) against the Tar Heels in their super regional debut.

Washington, also playing in its first super regional, won for the 13th time in 15 games and the first time in nine all-time games with the Titans.

Fullerton, despite committing five errors, was within 6-5 in the eighth but left the bases loaded against Hardy. The Huskies’ Kaiser Weiss, who entered as a defensive replacement in the sixth, hit a two-run double in the ninth to make it a three-run game.

The Friday winners can clinch berths in the CWS on Saturday.

Since the current tournament format went into effect in 1999, 78.9 percent (120 of 152) of the teams that won Game 1s in super regionals have advanced to the College World Series.

BEAVERS ON A ROLL

Oregon State has won its four NCAA Tournament games by a combined 43-5, and the Beavers’ 1.00 ERA ranks second in the tournament behind Texas’ 0.67.

Washington Joe DeMers, who had been the scheduled Game 2 starter, took over for Hardy to start the ninth inning and got the last three outs.

Hardy issued two straight walks to load the bases with two outs in the bottom of the eighth. He got a groundout to end the inning. DeMers threw 14 pitches in the ninth. Coach Lindsay Meggs did not announce his pitching plans for Saturday.

BALL ONE ON NO PITCH

Stetson’s Jon Meola started his at-bat leading off the seventh inning with a 1-0 count before a pitch was thrown. Home-plate umpire Greg Charles assessed a ball because Tar Heels shortstop Ike Freeman, who was tagged out in a rundown between third and home to end the sixth, was too slow coming out of the dugout. The between-innings break is to be no more than 108 seconds.

FAYETTEVILLE, Ark. (AP) — Blaine Knight started seven games this season against Southeastern Conference pitchers who were taken ahead of him in this week’s Major League Baseball draft.

The Arkansas right-hander, a third-round pick of the Baltimore Orioles, has yet to lose to any of them — or anyone else, for that matter.

Knight’s knack for toppling some of the country’s best is one of the many reasons the nationally fifth-seeded Razorbacks (42-18) are confident they will return to the College World Series this season for the first time since 2015. To do so, first they have to win two games against fellow SEC member South Carolina (36-24) in a super regional series that begins on Saturday.

Arkansas will start Knight in the opening game, a familiar series-opening position for the junior who has compiled an 11-0 record and 2.74 ERA in 16 starts this season.

It’s not just Knight’s  record that has impressed this season, or that he improved his draft status from the 29th round (Texas Rangers) last season to the 87th overall pick this season. It’s who the 6-foot-3, 170-pound hurler has left in his wake that has caught the attention of many.

After being drafted last year, Knight decided to return to the Razorbacks for another season — somewhat because of his draft position but mostly because of disappointment following Arkansas’ regional exit a year ago.

He believed he already had the talent to perform on the pro level after going 8-4 with a 3.28 ERA as a starter last year. However, Knight still had to learn how to harness that talent on a consistent basis and overlook little frustrations that sometimes affected his performance during games.

This season, Knight has learned to put aside little things like walks, bunts or just about anything else and is confident enough in his pitches to believe he can get out of jams.

“I think this year you’re seeing someone who has just learned how to pitch through things that maybe don’t go his way or a pitch he doesn’t get,” Arkansas coach Dave Van Horn said. “That’s one reason he has 11 decisions and he’s given us a chance to win pretty much every time he’s gone out there.”

Arkansas has reached the College World Series four times in Van Horn’s first 14 seasons. From the outset this season, the expectation has been that the Razorbacks would return to Omaha for a fifth time to seek the school’s first national championship.

With Knight leading the way, those hopes are alive.

“There’s not a lot of security in baseball, but if you could say that there is a little bit, I would say Blaine Knight has it for sure,” Arkansas infielder Carson Shaddy said.

Yankees topple the Mets in opener of Subway Series