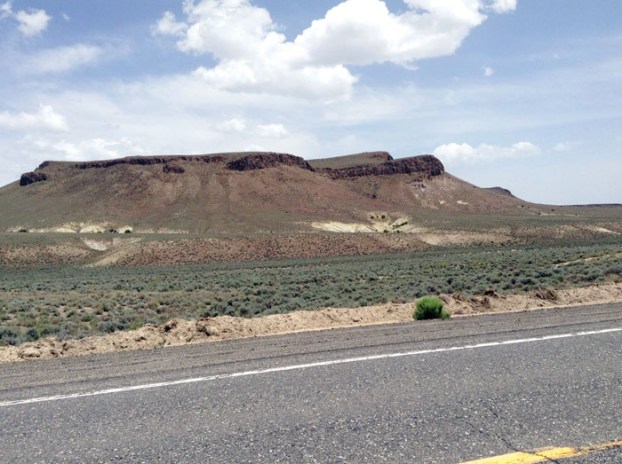 In another part of the west, this is called a mesa and other places a butte. This one was especially beautiful today.

David Freeze: An exciting and challenging day ends with a milkshake

My third day on the road was the best yet. For once, scenery dominated the ride. The only conversations were brief and to the point. In this land of fewer people, fewer conversations might become the normal.

Before I go too far, I need to explain that I did have an indoor toilet Wednesday night. The photo of the outhouse came from the quirkiness of Middlegate Station. Truly in the middle of nowhere, I had a great time just exploring and resting my legs for Thursday’s climbs.

Two things did happen Wednesday night of note. I took a shower at the end of the Warriors/Cavs game and had boiling hot water for a few minutes and then it tuned immediately cold, then back again. It worked out, just to get clean and not to contemplate the day like I usually do.

The bike cyclometer got fixed because Eric at Skinny Wheels knew what the problem was. When the bike shop crew put the front wheel back on, they inadvertently reversed it and left the magnet too far from the sending unit. Simply reversing the wheel again fixed the problem.

I started at dawn again, with a temperature of 55 and breezy. Most of the first half of the ride was uphill, gaining about 2,000 feet in elevation.

Along the way, I stopped at the preserved remains of an old telegraph station, an Overland Mail and Stagecoach station and a Pony Express Station. All were just piles of rocks that had been preserved to hold them in place while fencing was added to keep people from carrying off the remaining rocks.

My only other stop of the morning was at the location of the Cold Springs Pony Express Station, now a modern restaurant, bar and RV park. I bought some high-priced snacks to make sure I would have enough for the rest of the day’s ride without supply points.

There was even less total traffic Thursday and better roads. The lanes are very wide, so far leaving me plenty of room to ride even with the rumble strips.

A big highlight of the morning occurred near the top of the New Pass. I saw my first herd of wild horses, this time six in number. When they saw me, they started walking away. They were beautiful and not one of them looked the same.

The higher desert began to exhibit some more unusual mountains and a few patches of remaining snow. The temperature was again moderate, topping out at about 85 in Austin.

The tailwind remained again Thursday after turning from an early-morning headwind. Just six miles before Austin, I was stopped for a major road construction project and then was immediately allowed to proceed, while long lines of cars and trucks had to wait up until 30 minutes to pass.

I just stayed over and out of the way.

My evening in Austin was off to a good start. I made an especially good deal on a room and ended with a fine place. My first milkshake of the trip was a blueberry one, a first ever I think. No pineapple was available.

U.S. 50 is Austin’s Main Street, and I am amazed at all the history here. There are a couple of dozen historic places along the quarter-mile downtown.

Austin is a actually built into the side of a mountain, which will leave me almost 900 more feet to climb first thing this morning to top Austin Pass. Other than that, today looks a little easier in climbing than Thursday but longer at 70 mlles to Eureka, also up the side of another mountain.

Thursday’s ride was 65 miles from Middlegate.

I found a shiny quarter along the road and used it on the blueberry milkshake. I also broke one of my earbuds, and chances are that no replacements will be available until maybe today.

Austin was another silver boomtown and currently has about 300 residents. There is a small castle here, and I might be able to convince my legs to climb to the top of a big hill to see it.

This Austin is supposedly named for Austin, Texas, and there are lots of yellow roses in town, brought from the other Austin.

All I know at this point is Main Street is a severe uphill. I will continue up that hill early this morning and head for 70 more miles without supply points.

I hope you are enjoying this as much as I am, and I hope to see you here tomorrow.