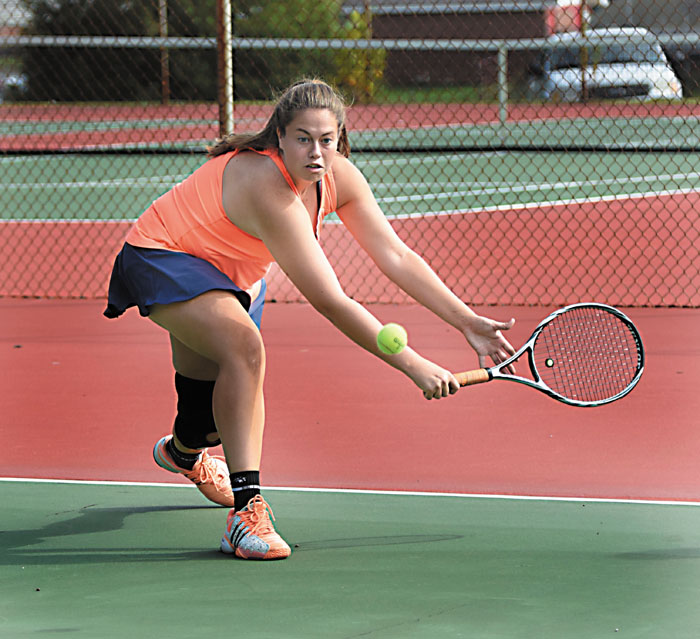 Wayne Hinshaw file photo/for the Salisbury Post ... Carson’s Siera Fesperman, shown during a tennis match against East Rowan. Fesperman has decided to continue her education and tennis career at Methodist.

But it turned out be one of those silver-lining things. That  injury actually led to her signing with Methodist University’s program, where she’ll continue her education and tennis career.

Fesperman was a terrific teammate throughout her career, even when she was sidelined.

“She was always there,” Carson coach Kayela Galloway said. “Even when she was hurt, she never missed a practice, never missed a match. She is a coach’s dream.”

As a senior, Fesperman made a strong comeback and produced another all-county season. She turned in her finest season, as Carson went 13-2 and shared the North Piedmont Conference title with South Iredell with a 9-1 record.

“Coming back from the injury, I knew I would have to work harder than ever,” Fesperman said. “I basically had to re-start my form. It was almost like starting over,”

As a senior, Fesperman was just about an automatic win for Carson at No. 3 singles, going 13-1 during the regular season. She prevailed in gritty matches against West Rowan and South Iredell that went to third-set tiebreakers.  In both matches, she rallied after losing the first set.

“I have a strong serve, but I think my best asset as a tennis player is my competitiveness,” Fesperman said. “Even I get down a set, I’m not going to give in.”

Fesperman played regular-season doubles with senior classmate Gabi Jolly and went 10-3. Then she played in the regionals with another senior teammate, Emily Sloop.

“Siera really had a spectacular senior season,” Galloway said. “She was the definition of a team player, a leader on and off the court, someone who always wanted the best for all of her teammates.”

Fesperman started playing tennis in seventh grade at China Grove Middle School. She played other sports — she was a reserve on the Carson basketball team  that took championships this season — but tennis always was her favorite.

Methodist, a Division III school in Fayetteville, is a college Fesperman targeted because it offers a professional tennis management degree. She’d like to make tennis her life’s work.

Galloway is confident she’ll do well in college.

“Siera has extreme dedication,” Galloway said. “Dedication to her team and to being the best she can be.”