David Freeze: State No. 46 is in the bag 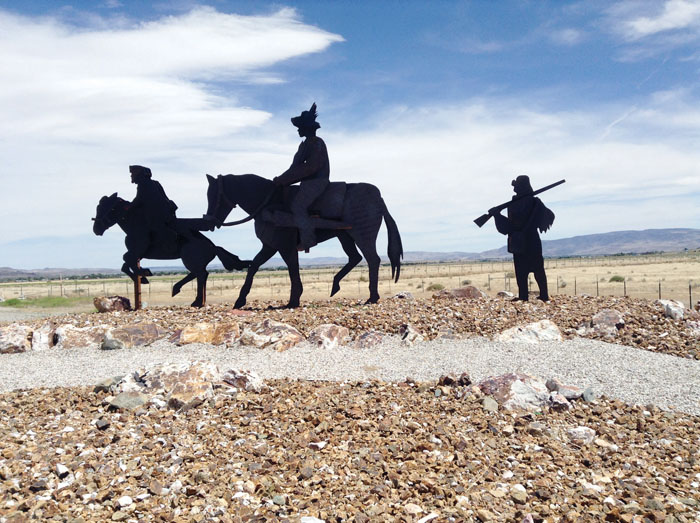 This artwork along U.S. 50 depicts the exploration of the Nevada area that David Freeze is traveling. David Freeze

My first day back on the bike seat netted Nevada as state No. 46 in the big bag of states I have cycled.

I had not ridden a bike since the end of the Outer Banks journey back in November, but nothing felt strange as Tuesday afternoon’s ride developed.

My first responsibility was to give a presentation on perseverance to the leadership group at Mission Senior Living in Carson City. After a fun time with that, I jumped on the bike and pedaled toward Fallon, Nevada. My route for the next few days will be along “the loneliest road in America,” as described by Life Magazine.

First, I get lots of time to think about things while pedaling 53 miles. While riding Tuesday, among other things I thought about two topics left out of that morning’s update. One of the them is a pastry called “buttermilk bars.” They were sold in a doughnut shop in Dayton, and I had to get two after hearing about them. These bars might be the best pastry I have tasted.

The other thing was that during the Virginia City tour Monday, I was especially interested in hearing some of the history of Mark Twain as he began his career in journalism there. Yes, Twain’s very first real job was with the Territorial Enterprise working as a reporter for the popular newspaper in the sprawling boomtown. He worked in Virginia City for a year before moving on to California and later referred to his time in Nevada as “roughing it.”

Back to Tuesday. I left Dayton pedaling east on U.S. 50 and found a rolling road with some moderate climbs and a wide bike lane for about 20 miles. Then, a couple of interesting things happened at an intersection when Alternate U.S. 50 went toward the north. The road narrowed, and the bike lane was no more.

Outside the white line was one wide set of rumble strips that lasted for close to 20 miles. The road was not heavily traveled, and I pedaled in the roadway. I had only one honk from an irritated driver who had to go around me while pulling his Jet Ski.

A newly paved road with another wide bike lane was found when I turned toward Fallon for the last 10 miles and my first evening on the road.

It was a cool day with a sometimes tailwind and moderate cloud cover. Cool in this case means mid-80s. I will see 100 plus temperatures later on the ride.

Not much happened on my ride Tuesday afternoon. Though not heavily settled, this section of Nevada offered plenty of supply points. Those will gradually disappear.

I did see the Lahontan Reservoir, a huge lake in the middle off the desert-looking surroundings. Some interesting metal artwork was tastefully placed at the only roundabout I have ever seen in such a lightly settled area.

I stayed Tuesday night at the Budget Inn in Fallon with great WiFi, a Walmart next door and a McDonald’s too just in case that WiFi fails. It feels good to be back on the road again, and my sense of adventure is peaking over the sparse areas ahead.

There is a lot of uncertainty over today’s ride. If I can make 110 miles to Austin, the next place with services available, all will be well. But four passes or summits have to be climbed to make that happen.

U.S. 50 is loaded with summits and passes over the next 300 miles. Why not? I came to see the state. If I can’t make Austin, there is little available.

I have some restocking to do in my bags already. Besides food and water, I left my wide-brim hat at home and possibly my multi-tool as well. A trip across the parking lot to Walmart will remedy that situation.

Another fun day came to an end on the road but Tuesday evening was used for planning. I will need to more than double Tuesday’s distance today.