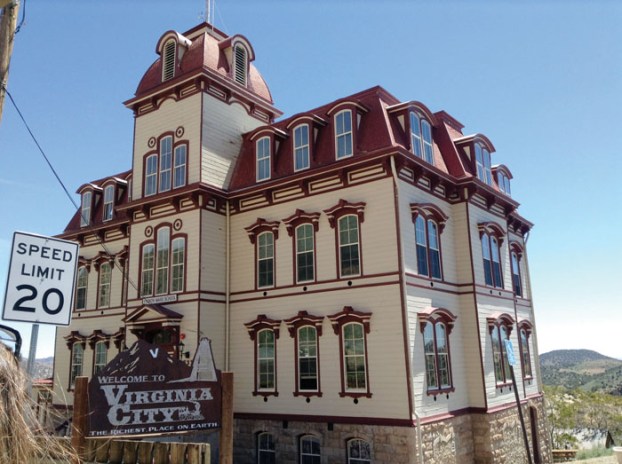 This was the consolidated school building in boom-town Virginia City that once served 1,000 kids with water fountains, central heating and a gym on the fourth floor. It has been restored into a beautiful museum.

David Freeze: A visit to Virginia City, once the richest city in the world

Darryl Fisher took me for a flight at sunrise Monday morning in his Piper Cub. In short order, we flew straight toward the sunrise, saw a brushfire, an auto testing facility, the site of the first gold strike in Nevada and the Bunny Ranch.

All of this was near Dayton, as is Virginia City, where I planned a nice visit later in the morning.

Bunny Ranch is a well-known local attraction that specializes in prostitution, which is legal in Nevada. Not many people were there at 6 a.m.

The flight was a great way to start the day, my last one not on the bike. I had been thinking all day about getting back on the road, especially after seeing a long-distance cyclist later in the afternoon.

But the highlight of the day was exploring historic Virginia City. Less than 15 miles away, we could see the city and some of the nearby mining sites on our flight. I couldn’t wait to explore and find out more about the history.

Virginia City seemed jam packed on Saturday morning as the Reno-Tahoe Odyssey passed through. Monday morning, almost nobody was moving on the streets at 9 a.m., and most shops and museums didn’t open until 10 a.m.

The visitors center did open at 9 a.m., and I got plenty of information inside.

Both sides of the street have a wooden board walkway, just as it did in the boom era after gold and silver were discovered in abundance. Most interesting to me was that some estimates say the city had more than 200 saloons and 40,000 people but only six churches and a few small schools.

Gold had been discovered in Dayton in 1849. By 1859, gold and silver mining camps surrounded Virginia City.

Miners came from all over the world to make wages of $4 a week, about four times the worldwide average. Those miners worked in extremely hot conditions, sometimes as high as 140 degrees deep underground. They stayed below ground for 10 to 12 hour days and worked by candlelight.

Donkeys and burros pulled the ore carts and stayed with the miners all day too, all of them using the bathroom and eating where they could.

Gold was still mined until recently on a very limited basis, and other minerals are also still found in the area. Tourism has taken over as the main enterprise now, beginning with the wildly popular TV show “Bonanza” that was set in the same area and drew fans to the real Virginia City.

I took the tram city tour and got a good deal on information, time and cost. The driver told us what to see and much about the city’s past.

The elevation of Virginia City is about 6,200 feet and offers a special view of the surrounding area that is about 2,000 feet lower. I was able to watch a brush fire continue to burn all day and heard interesting stories one after another.

I had mentioned legal prostitution earlier, and Virginia City didn’t miss out. As many as 20 “cribs” made up the Red Light district. The most famous madam in town was given an elaborate funeral by all five companies of the town’s fire department.

Three saloon owners committed suicide on the same table, now proudly displayed as the “Suicide Table” in the Delta Saloon and Cafe.

One mine was found to be virtually worthless and another saloon was built over the top of it. The mine remain,s and I was able to tour it.

I also toured the Fourth Ward School, one of the finest school buildings in the world when it opened in 1876. With as many as 1,000 students in all grade levels, the building had its own printing system, central heat, water fountains on all floors and a gymnasium on the fourth floor. It was closed in 1936 but is now open as a museum.

I saw two beautiful wild horses walking the street, visited Nevada’s first Catholic Church and watched a well-played gunfight between the marshall and two bad guys, one of them a girl who had earlier talked to me about running.

That about does it for Monday. Today, I will be giving a presentation locally and hope to hit the road on my bike no later than noon. My goal is the town of Fallon, the last real town on my route in Nevada while heading toward Utah.

This was just another fun day, and the trip out here just seems to get better each day. Hopefully, my next report comes after at least 50 miles on the bike.