Down on the farm: Arts & Ag Tour shows diversity of today’s agriculture 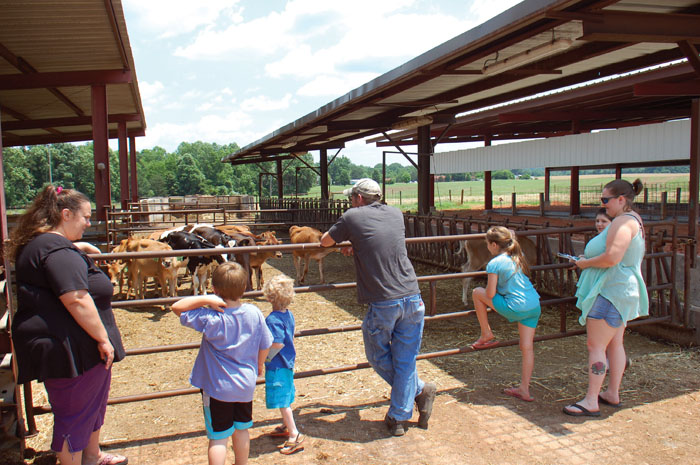 From left, members of the Taylor family — Laila, Weston, Levi, Daniel, Lizzy, Chrissy and Connor — take a look at some of the older calves on the dairy farm of Johnny and Karen Moore along Hall Road in western Rowan County. Mark Wineka/Salisbury Post

“I’m the cow whisperer,” Moore said Sunday as folks walked around the farm of his grandparents, Johnny and Karen Moore, whose large, diversified operation is located off Hall Road.

“Pretty much cows love licking,” reported McKnight, who finds the farm a good place to learn important things like this. Both Clayton and Finley were hanging out Sunday in the new calf barn, where the calves do a lot of licking when offered a pat.

Finley said his dairy cow, Lemonhead, is getting close to birthing a calf herself.

The Moore farm was one of a dozen places on this weekend’s first Rowan Arts & Ag Farm Tour.

“I hope it’s a good education, no matter what farm they go to,” Johnny Moore said for those taking the self-guided visits across the county. “They need to see the different operations. Agriculture is your start. That’s where your food comes from.”

“I think the farm tours are going to be good,” Johnny Moore said. ‘”Education is getting so far away from farming.”

The Moores — son Brian also plays a major role — have a well-run operation, one that requires a sharp pencil and running a tight ship, Johnny said.

The Moores have a dairy herd of 140 cows. In addition, they plant crops of corn, soybeans and wheat — on land they own or land they lease — and they also run a certified seed business.

So if you don’t count Karen Moore’s greenhouse, which is an enterprise on its own, the Moores have three things to work and rely on.

Each year, maybe one or two of those things do well and keep the farm going. In the recent past, for example, the Moores have battled low milk prices.

He worries that farming will  keep dwindling in the next 20 to 30 years as more developers reach into the countryside and buy land for housing.

“It’s changing the landscape really fast,” Moore said. “People want to be here, out in the rural landscape.”

The Moores have been on this farm since 1988 and it has been pretty much reconstructed over the past three decades. The most recent reconstruction was the barn for new calves.

The old barn blew over and was crushed by a mighty wind and wall of rain out of the southeast on April 15 —  the same day Greensboro had a tornado.

But those are the kinds of emergencies you deal with regularly in farming.

A steady stream of visitors came by the Moore farm Sunday afternoon, thanks in part to the homemade ice cream Hoffner Brothers Dairy was serving up under a tent,

The ice cream was made under nearby shade trees with the help of a 1925 John Deer hit-and-miss engine.

Another farm tour stop in western Rowan County was the Back Creek Farm of Joe and Robin Hampton. Back Creek serves as one of the farm’s boundaries.

The couple have been raising Angus cattle here since 1984, but they now have a sizable herd of  Katahdin hair sheep and prize-winning chickens, mostly Orpington breeders.

Joe Hampton routinely shows his best chickens at the State Fair in the fall — and does well.

“He takes enough birds that he’ll come back with some blue ribbons and banners,” Robin said. “He’s got it bad.”

On the tour of their farm, Joe pulled a passenger trailer behind his truck. Every now and then, he stopped beside a pasture — the Hamptons call them “paddocks” — to explain how they rotate their cattle, sheep and donkeys among the different fenced-off sections.

The Sunday afternoon tour had a special treat when the passengers saw Joe call out a few times and lead the stock, which all graze together, into another paddock. It was like the 50 cows, 125 ewes and half-dozen donkeys were running to an all-you-can-eat buffet.

Hampton describes it in those kinds of terms. The animals go into a new paddock every two to five days. When they first go in, they eat what they consider the ice cream, Hampton said.

The second day or so they get to the meat of the pasture.

Toward the end, before it’s time to move to another paddock, they are down to the vegetables, or cleaning up what they passed over on the previous days.

It just happens that the ice cream is different for each breed, and Hampton said the donkeys have proven critical to the mix.

This kind of rotation among the paddocks and determining where the livestock should go next is crucial to quality beef and lamb and crucial to the farm’s health and survival.

Hampton said think about the great grazing areas of the world and the diversity of animals who were on them, leaving behind the manure that became fertilizer for the next grasses. Some of the most fertilized places in the world, he noted, have never had a bag of fertilizer on them.

Helping with the fertilization process are Hamptons’ chickens. The couple put many covered “chicken tractors” out in their fields, which can be moved every 24 hours.

The chickens in the tractors are fed, and the manure they leave behind is good fertilizer for the grasses. The Hamptons’ pastures are filled with many different kinds of grasses — the variety is important.

As tour-goers stopped next to a paddock with chicken tractors Sunday, two Akbash dogs — a Turkish breed — came toward the fence to assess if the tour was friend or foe.

“Those chickens belong to those two dogs,” Hampton said.

Back Creek Farm has about a dozen of these dogs, which are highly protective of all the herds.

“They are now one of the most valuable assets to our farming operation,” Robin Hampton said.

The Hamptons started with registered Angus cattle. Their aim was to raise bulls and sell them. Over time, they have sold breeding stock in 27 states.

But North Carolina changed over time, Joe Hampton said. Small operations went out of business as farmers died and their children sold the land to developers.

“Those pastures are growing houses, not meat,” he said. “You can’t sell somebody a bull who lives in a subdivision.”

But they will buy your steak. The Hamptons had bred cattle for bulls, but they also realized they had bred high-quality meat.

Today, they sell their meat to a cooperative and restaurants in the Raleigh-Durham area. They also got into the lamb business to supply that same connection.

They are committed to selling 48 head of fat cattle and four to six lambs a week over the coming year.

Robin Hampton said she was glad many people stopped by their farm over the weekend and witnessed where the food they produce comes from and how the livestock is treated. The livestock is animal welfare approved and certified.