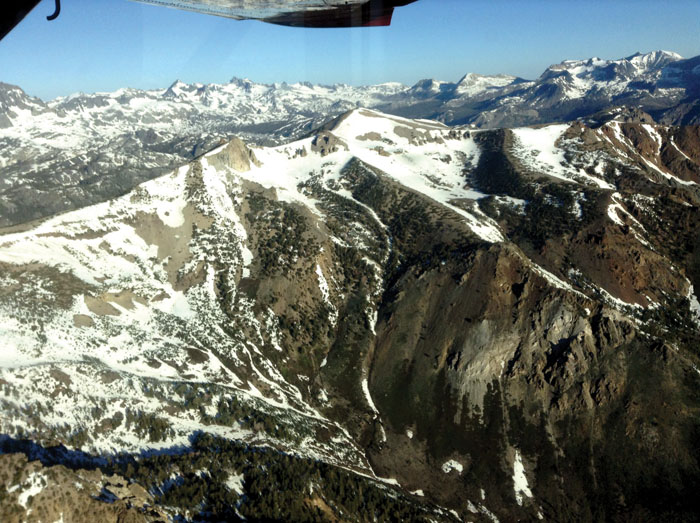 Sierra Nevada mountain range as seen from the right window of the small plane on the way to Edwards AFB on Sunday morning. Photo by David Freeze, for the Salisbury Post.

An early flight out on Sunday took me to Porterville, California, for breakfast. That doesn’t sound like much itself, but it was the start of an another amazing day. Porterville is near the home of McFarlan, the home of the high school cross-country team that was made famous with the movie of the same name. Check it out for a wonderful and inspirational story.

On the way to Porterville, the Sierra Nevada mountains offered spectacular views. Some of the snow-capped peaks seemed to be higher than our plane even though we flew at about 13,000 feet. Still iced over lakes were super cool to see.

We next landed at Rosamond, California, the nearest town to Edwards Air Force Base. The town and the base are in the middle of the desert and it brought back memories of my Route 66 trip through the Mojave Desert and experiencing 117 degrees. The temperature reached 104 today near the end of the tour on a bright, hot and windy day.

Planes housed at the base include F-35 and F-22 jet fighters, B-1, B-2 and B-52 bombers and various transport planes. Test pilot training and their work on the various jets also happens there. Our group, which included a group of six people, received a guided tour of the base from Lt. Colonel Kevin Erker, a Marine Corps test pilot himself. The location of the base was chosen away from more populated areas due to the danger involved in testing the planes.

The plane we flew in today belongs to Darryl Fisher, my host for the time in the Reno/Carson City/Dayton area. He has owned the 1977 Cessna 185 Sky Wagon for 24 years along with his various Stearman planes and a Piper Cub. The 300 horsepower Cessna 185 is considered a working plane, able to haul big loads, capable of short take offs and landings and are favored by bush pilots in Idaho and Alaska.

The return trip included the sight of Mt. Whitney in California, the tallest mountain in the lower 48 states. We also flew over Bodie, California, a ghost town from the 19th century now maintained as a state park. Various original buildings and the remnants of the gold mine still remain on site. Bodie once had 10,000 residents and was the third largest town in California at one time.

The Marine Corps also maintains a mountain warfare training center called Pickel Meadows in the same area. The center is located in the Tolyabe National Forest at 6,800 feet in elevation.

We landed back in Dayton at just past 5 p.m., just in time to watch the Warriors/Cavaliers game. With that another day of interesting things has come to an end. Today, I will visit nearby Virginia City where I began a challenging leg of the Reno/Tahoe Odyssey on Saturday morning. Virginia City is loaded with history and I plan to check it all out.

Thanks for joining me for another fun day. See you again tomorrow!