Capitals flying high, up 2-1 on Vegas for Stanley Cup Final 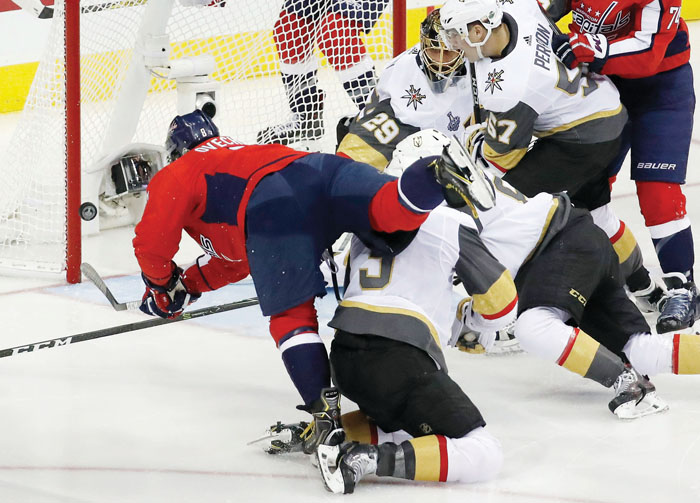 WASHINGTON (AP) — Alex Ovechkin went airborne, Evgeny Kuznetsov flapped his arms like a bird of prey and the Washington Capitals are flying high, just two wins away from winning the Stanley Cup.

Ovechkin dived to score his 14th goal of the playoffs and raised his arms in joy when Kuznetsov beat Marc-Andre Fleury and broke out his signature bird celebration in a second period the two Russians will long remember. Led by their two best players, the Capitals beat the Vegas Golden Knights 3-1 Saturday night to take a 2-1 lead in the best-of-seven Stanley Cup Final.

Fired up in the first Cup Final game in Washington since 1998, the Capitals unloaded chance after chance on Fleury, who made 23 saves but couldn’t backstop a frazzled, disjointed team that lost two games in a row for the first time in the playoffs. At the other end, Braden Holtby gifted Tomas Nosek a goal by giving the puck away but stopped the other 21 shots he faced from the Golden Knights, who looked nothing like the winners of 13 of their first 16 playoff games through the first three rounds.

The Golden Knights’ historic run in its inaugural season is now in danger of coming to an end with Game 4 back in Washington on Monday night. The Capitals are seeking their first title in their 43-year history.

Holtby was there when the Capitals needed him, but they didn’t need him much because they were on the attack for much of the game. Fleury stopped Ovechkin on a 2-on-1 rush early and the superstar captain was at his best early.

In his first home Cup Final game, Ovechkin attempted eight shots in the first period and scored a goal that seemed inevitable. It came 1:10 into the second period when Ovechkin went full-extension over Vegas defenseman Brayden McNabb to reach the rebound and backhanded the puck past Fleury.

Ovechkin’s 14th goal of the playoffs matched John Druce’s franchise record set in 1990 and tied him for the league lead in these playoffs.

His joy overflowed on the bench when Kuznetsov showed his injured left arm is just fine by scoring on a perfect wrist shot on an odd-man rush. Ovechkin looked to the ceiling with his arms extended as he was hugged by Lars Eller.

“He’s so emotional about playing for the Cup,” coach Barry Trotz said of Ovechkin. “You can tell by the expressions on his face all the time, his emotion. One thing you can see is Alex keeps his emotions on his sleeve. It’s on the outside. It’s not on the inside. You know exactly what he’s thinking.”

Capitals fans who have watched heartbreak after playoff heartbreak easily could’ve been thinking the worst when Vegas scored early in the third period. Holtby — well-aware of the Golden Knights’ ability to cross up opposing goaltenders — had his puck-handling attempt intercepted by Bellemare. The puck skittered to Nosek for an easy goal.

Vegas built some momentum, but Devante Smith-Pelly gave the Capitals an insurance goal with 6:07 left — his fourth of the playoffs — after Jay Beagle took the puck away from Shea Theodore on the forecheck and found his teammate skating in alone on Fleury.

“I’ve always loved the playoffs,” Smith-Pelly said. “I love scoring the big goals. I don’t know what it is, but these kinds of games are the most fun to play in.”

WASHINGTON (AP) — The Washington Capitals put Evgeny Kuznetsov in the lineup for Game 3 of the Stanley Cup Final against the Vegas Golden Knights on Saturday night and he didn’t miss a beat.

The Russian star scored and added an assist in the Capitals’ 3-1 win that put Washington two wins away from the championship.

The leading scorer in the playoffs left Wednesday’s Game 2 clutching his left arm after a big hit from Brayden McNabb and did not return.

Kuznetsov took part in an optional practice Friday and the morning skate Saturday and said the undisclosed upper-body injury “feels better every day.” Coming into the game, Kuznetsov’s 25 points are the most of any player this postseason and he’s a weapon at even strength and on the power play even if he’s not 100 percent.

“Kuzy’s a surprisingly tough kid,” Capitals defenseman Matt Niskanen said. “He’s kind of a slender guy, wiry strong, but guys play through stuff all the time throughout the year and then especially this time of year.”

Washington defenseman Michal Kempny was also in the lineup after a scare during pregame warmups. Kempny stepped on a puck, crashed into the boards and went off the ice for repairs before returning.

Kempny and Kuznetsov were the last two players on the ice. The 26-year-old Russian center spent all the time allotted to him stickhandling and shooting to test the injury.

WASHINGTON (AP) — The Vegas Golden Knights have been bucking history all season, and now they will have to do again to win the Stanley Cup.

Vegas made too many mistakes in its own end of the ice and scored just one gift-wrapped goal Saturday night in a 3-1 loss to the Washington Capitals, who never trailed in taking a 2-1 lead in the best-of-7 series.

There were missed assignments, botched passes and only 22 shots on goal. The Golden Knights hardly looked like the team that lost only three games in the three series that earned them the title of Western Conference champions.

As a result, Vegas has lost two straight for the first time since early April, when it dropped the final two meaningless games of the regular season.

The Golden Knights are struggling to put the puck in the net, and now trail in a playoff series after three games for the first time.

Vegas still has a chance to become the first expansion team to win the Stanley Cup. But when the Final is tied at one game apiece, the winner of Game 3 ultimately has gone on to capture the Cup 78 percent of the time  (21 of 27)  since the series went to the best-of-seven format in 1939.

Coming into this series, Vegas was 12-3 in the postseason. The only deficit the Golden Knights faced was in the Western Conference finals, when they lost the opener to Winnipeg before rattling off four straight wins.

In this one, the Golden Knights trailed 2-0 before taking advantage of a huge mistake by Holtby for their only goal.

After the goaltender did a poor job of clearing the puck from behind the Capitals net, Tomas Nosek easily scored to slice Washington’s lead to 2-1 at 3:29 of the third period.

But the Capitals restored the two-goal cushion when Washington’s Jay Beagle outworked Shea Theodore of the Golden Knights in the corner, gained possession of the puck and sent a centering pass that Devante Smith-Pelly slammed into the net at 13:53.