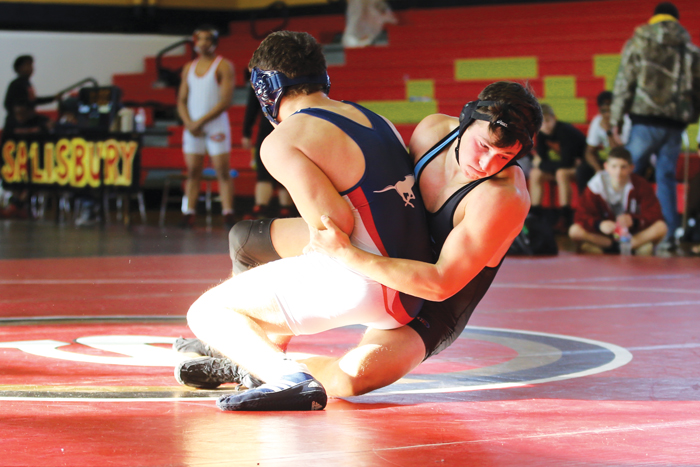 MOUNT ULLA  — An excellent student, West Rowan’s Luke Waggoner was set to continue his academic career at UNC Wilmington, when an unexpected opportunity arose to continue to wrestle.

“I got a call from Greensboro from a number I didn’t recognize,”  explained Waggoner, West’s 160-pounder as a senior. “I thought it was probably  a wrong number, but I picked up. It turned out to be Erik Wince, the Greensboro College head coach, and he said he’d been following me for a while. He said he’d already checked out my grades, and he believed I could be a good wrestler for him.”

Waggoner was invited for a visit, agreed to take a look and was surprised by what he saw. Greensboro is a small Division III school with about 1,300 students, but it was nicer than he expected, and the wrestling program, only a couple of years old, had bigger goals than he expected.  Wince has a solid background. He was an assistant at Davidson College when he was chosen to get Greensboro’s program off the ground.

“I thought I’d wrestled my last match,” Waggoner said. “So this is pretty exciting.”

Waggoner’s first unofficial wrestling efforts were of the no-rules, no-holds-barred variety at his house. A few chairs probably got overturned. A few lamps probably got broken.

“My house was the house where everyone gathered to play ball or play games,” Waggoner said with a laugh. “This was guys like (former West Rowan outfielder and quarterback) Kacey Otto and (Carson baseball and basketball star) Owen White, so it was really competitive. Even if we were playing Xbox, it got  intense. It usually ended with a wrestling match.”

Growing up, Waggoner believed his best sport was going to be baseball. He was a pitcher and outfielder.

“I do it every year,” Brown said. “I introduce the guys to wrestling for a week, show them a few skills and a few moves. Once in a while you get lucky, even at the high school level, and you find a kid who has never wrestled, but has the potential to wrestle,  a kid who has a knack for it. I found one of those guys in Waggoner. We got him out for the team, but he was starting from scratch.”

Waggoner had natural strength, so he expected to do fine on the mat, even as a freshman. He was in for a rude awakening.

“I was wrestling at 132 pounds, and I was pretty strong so I figured I could just go out there and muscle people around,” Waggoner said. “But I kept losing to guys with more experience and better technique. I wrestled some jayvee matches and I wrestled some varsity matches. I didn’t get many wins.”

Wrestling at 138 as a sophomore, Waggoner made progress. He’d learned a few reliable moves to supplement his strength. He achieved a win here and there, enough success to keep him from getting frustrated.

His junior year really should’ve been his breakout season, but Waggoner didn’t wrestle.  He spent that winter swimming for the Falcons, but he also dedicated himself in the weight room and got even stronger.

As a senior, wrestling at 160, Waggoner enjoyed a banner season. West got off to a strong start as a team, winning a Thanksgiving tournament and kept it going by winning the Rowan County championship for the first time in 28 years.

“Luke lost to some quality opponents, but he overpowered most guys and his hard work, his coming to practice every day and competing as hard as he could, made him a better and smarter wrestler as a senior,” Brown said. “He had a tremendous year for us. He had the best record on our team (20-5) and he was great in the conference matches. He was a No. 1 seed for the conference tournament.”

Waggoner was a regional qualifier, but his season ended abruptly. He was dealing with illness  in February and he struggled in the conference tournament with back-to-back losses.

Waggoner thought for a few months that his wrestling career  had ended on a down note, but now he has a college career to look forward to.

“Things happened suddenly with Greensboro,” Waggoner said. “But I couldn’t be happier about the way things worked out.”

Waggoner plans to study business or engineering in college, but his ultimate dream is to serve in the military as a Navy SEAL.

“That’s his goal,” Brown said. “And no sport is better than wrestling to prepare him for that goal. Mentally and physically, wrestling makes you tough.”