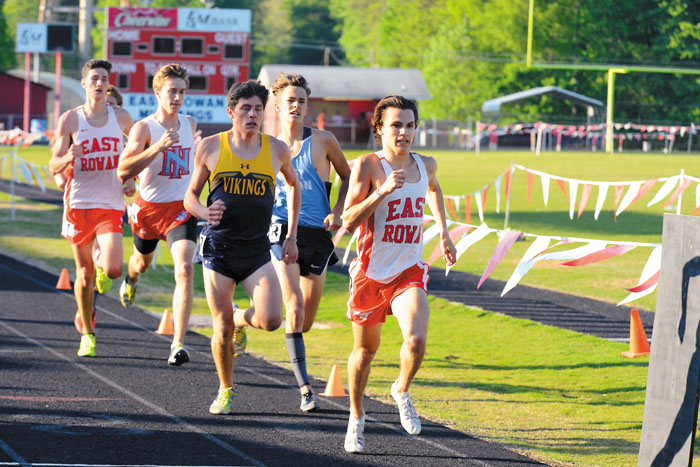 Wayne Hinshaw file photo/for the Salisbury Post ... East Rowan’s Sean Incardona, right, is shown winning the 800 meter run during the North Piedmont Conference meet on May 2. Incardona has decided to continue his education and running career at Lenoir-Rhyne University.

It was May 11, the 3A Midwest Regional at Greensboro’s Dudley High, and Incardona, a Lenoir-Rhyne signee, had qualified for the 1600 meters. He likes to call that race “the mile.” It basically is. A mile is 1609.344 meters.

Everyone knew the 1600 field would be electric, and with schools such as Mount Tabor moving down from 4A to 3A for this school year, it had gotten ridiculously swift. Only the top four finishers were moving on to states, and Incardona was the longest of long shots. He’d run 4:45 to take the 1600 crown in Rowan County and 4:41 for second place in the North Piedmont Conference. He was going to need to suddenly shave at  least 20 seconds to have any chance of advancing.

Incardona gave it his best, a personal best. He finished ninth, but he ran 4:31.84, the best time recorded by a  Mustang in the event since Conor Honeycutt ran that same time in the 2014 South Piedmont Conference Championships. A.L. Brown senior Brandon Hernandez, who took fourth to claim the final berth in the state field, ran 4:18.33.

“I knew it was going to be tough, so many fast guys,” Incardona said. “I gave it everything I had. I tied Conor Honeycutt. He was a great runner, so that’s an honor.”

Runners from the Midwest Regional finished 2-3-4 in the 1600 at the 3A State Championship.

Incardona had also qualified to compete in the 800 at Dudley.  He says he thought about not running. His best race usually is the 1600, and he knew his chances of finishing top-four in the 800 were remote.

And so Incardona moves on to college competition at L-R on a positive note. No states, but two spirited races.

Incardona is a fine student, so there’s never been any doubt he would go on to college to continue his education, but when his senior year began he was still undecided on whether he would compete at the next level in track and cross country.

“I was very unsure about running in college,” Incardona said. “What I did know was that I wanted to go to a school where I could study computer science and technology. If I could find a fit where I could have the major I wanted and still run, then so be it.”

Incardona learned a lot between his junior and senior years from athletes he’s met through cross country. East Gaston’s Landon Maxwell, who logs 60 to 70 miles per week showed Incardona that there was room for him to work even harder.

St. Stephens runner Jayden Hefner, who would finish seventh in the 1600 in the 3A State Championships, is headed to Lenoir-Rhyne and is another friend of Incardona’s.

“I think some of the runners Sean has met inspired him,” East cross country coach Rick Roseman said. “If they could do it, if they planned to keep up their grades while still running in college, then he could do it too.”

A struggling pole vaulter who got steered into running by long-time teammates Chase Whitley and Ross Alexander, Incardona got his senior year of competition off to a splendid start back in the fall. He was the Rowan County Cross Country Runner of the Year, taking the county championship for the first time after finishing sixth, third and second in previous seasons. He usually runs a 5K in 17:00, but he owns a PR of 16:36. He was a qualifier for the 3A State Championships.

In the recent track and field season, Incardona was huge, as always, for the Mustangs, teaming with his distance teammates and thrower Christian Bennett to lead East to county and conference championships. In the county meet, Incardona ran on the victorious 4×800 team, won the 1600 and placed second in the 800 and 3200. He was named distance MVP.

In the North Piedmont Conference Championships in early May, Incardona was running for the final time on his home track. He helped win the 4×800 and placed second in the 1600 and 3200. He had a huge triumph in the 800 — a victory that probably made the difference for the Mustangs — in his last event.

“He was pretty good when he started, but every year he got better for us,” Roseman said. “He’s just one of those special kids. He’s exemplified the tradition of East Rowan cross country and track and field with his dedication, commitment and hard work.”

Incardona is thrilled he found the right college fit. The more he heard about Lenoir-Rhyne’s computer science program, the more interested he got, and after he emailed L-R’s  track and cross country coaches, they checked out his credentials and began recruiting him. He gave a verbal commitment during the winter months and officially signed shortly before he made those maximum-effort runs in the regional.

“Lenoir-Rhyne has signed a big distance class — there’s eight or nine of us,” Incardona said. “I’m thankful for this great opportunity.”