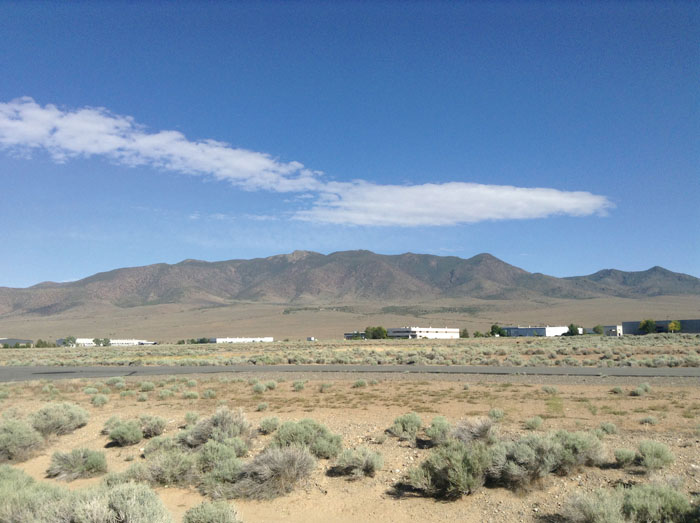 David Freeze will be running over these Nevada mountains on Friday.

It’s been a couple of months since my run/walk across North Carolina was completed. Exactly two months, as a matter of fact. I had stated that my next goal was to cycle in Nevada and Utah, and now I will be running in Nevada too.

First up this morning is the Reno/Tahoe Odyssey. More than 200 teams of 12 people each will tackle a grueling 175-mile running course that leaves from about 4,000 feet in elevation in Reno and climbs to over 7,000 feet before returning back to the starting point a little over 36 hours later.

I have not run at this elevation in a long time and am likely to struggle with it.

Mission Senior Living is the name of the team, and we will kick off early, at 7 a.m. today.

Little sleep, plenty of togetherness and some beautiful scenery are all in the near future. I hope to have great pictures for you on Saturday.

I was in Dayton, Nevada, on Friday night and will be headquartered here until the run is done.

The bike ride will begin on Tuesday and is going to be quite interesting. U.S. 50 has been dubbed “the loneliest road in America” by Life Magazine, and I will spend about four to five days on it.

U.S. 50 was used as part of the Pony Express route in 1860 and 1861. Only a small number of people live along the road, roughly about the same population as it had 150 years ago.

I will have plenty of information on the Pony Express and the Indians effort to drive them away. More riders were killed by Indians in Nevada than anywhere else along the route from Missouri to California. I will pedal over 11 mountain passes between here and the Utah line with the highest being 7,782 feet at Connor’s Pass.

The first book I ever read on long-distance cycling was “How Big Are the Pancakes?” A group of four women hit this stretch, and one of them quit. The other three rented a truck and drove through it. The great unknown awaits.

Once across the state line into Utah, I will top out at about 10,500 feet. The highlights for Utah should be Bryce Canyon National Park, Grand Staircase Escalante National Monument and Zion National Park. I expect to ride through the morning of June 14 and fly home on the 15th.

When flying in, I saw plenty of snow-capped peaks that were spectacular and am looking forward to more. Nevada is usually considered a high desert, but rain has been abundant here this spring just as it has back home.

The flights Friday were four hours from Charlotte to Phoenix and an hour and a half on to Reno. I was last in Reno about 15 years ago, and the area has been growing steadily. I am back in the Pacific Time Zone.

So the fun begins early this morning. I hope you will join me to run first, then pedal through states 46 and 47. The bike is out here and ready to go. I can’t wait to get started.