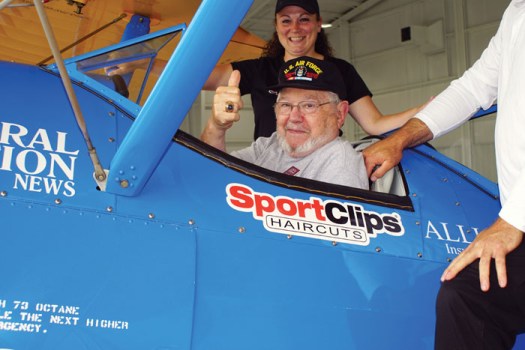 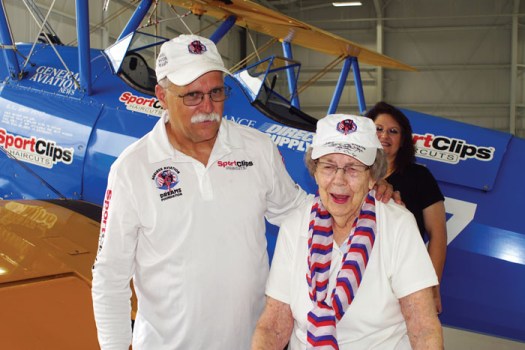 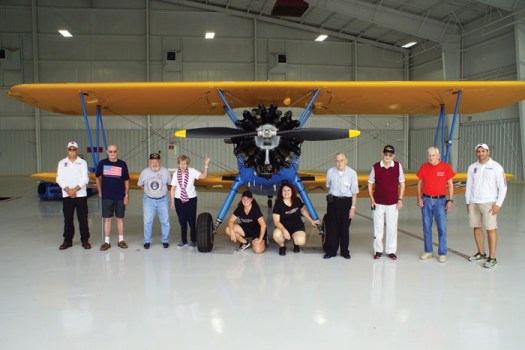 SALISBURY — Alma Prevette hadn’t been so excited in quite a while.

At 94 years old and the widow of World War ll veteran Lewis Prevette, Alma was worried whether she could get in the open-cockpit 1941 Stearman biplane, but she was determined to try. A friend at Oak Park Retirement told her that she was just crazy for wanting to fly.

Sitting in a dry hangar, the blue and yellow Stearman looked better than it did for all those pilots heading into fighters and bombers overseas during World War ll.

Ageless Aviation Dreams Foundation pilot Christopher Culp told the group about the history of the plane and how it came to be used for veterans flights. Several veterans chose to climb in the plane’s front seat and imagine open-cockpit flight.

More than 10,000 Stearmans were manufactured with just about 1,000 remaining today. The plane was nicknamed the “Yellow Peril” and often called the “Washing Machine” because so many potential pilots washed out when attempting to fly.

Ageless Aviation has provided well more than 3,000 flights at no charge since 2011.

Alma Prevette had never been in a small plane, according to her daughter, Doris Swaim. Once Alma made it into the plane, she was worried about getting out and her hair being messed up by the canvas helmet.

Alma and Lewis lived in Ronda and were married while he was in the service. Lewis had been drafted on Feb. 13, and he never liked any Friday the 13th afterward. Lewis returned home to Alma on Christmas Day, 1945.

Ned Thomas, a Korean War Army veteran, had flown with Ageless Aviation before.

“I was way less apprehensive this time,” said Thomas, who recently constructed a hand-made replica of the plane he visited on Monday.

Walter Leather and Wilbur Boltz, both World War II-era Navy veterans, had also taken previous flights. Leather, the Oak Park official photographer, gathered more photos throughout the morning. Boltz got strapped in the cockpit and made it as far as the runway before flights were called off for the day.

Boltz, himself a pilot in earlier years, had not been in a plane since 1954 until Ageless Aviation came to Salisbury two years ago.

Boltz served on the destroyer USS Johnston in the Mediterranean and Europe. He was promoted to main battery director, responsible for three twin 5-inch rifled guns. Boltz got training as a pilot when working at an airport, where he also learned how to apply the skin to Stearman planes.

Harold Barkley, 80, retired from the Army after 23 years of service with the rank of major, most of his time spent with the Signal Corps. Part of that duty was in Vietnam and then eventually at Nags Head, where he worked on a radar site.

Sgt. Maj. Harvey Dezern served for 21 years in the Army Airborne. Highlights of his service included the occupation of Japan, the early Korean War, Special Forces and 157 jumps. His rank is the highest possible for any enlisted man.

“I am humbled to be here to help bring joy to these fine people,” Madden said. “I want to thank them for what they did for all of us.”

“We do love our vets,” Gray added. “It is a pleasure to see their smiles.”

SportClips is the primary sponsor of Ageless Aviation Dreams Foundation.

Oak Park Retirement has arranged for veterans flights on Memorial Day weekend since 2014. Culp promised that the plane would be rescheduled for flights later in the year on a better day.

“This was a great opportunity to come here to meet our veterans, and it was unfortunate about the weather,” Culp said. “But I think we all enjoyed getting to spend some time together and as always, we thank them for their service on this special day.”