Part Two: The Spencer Railroaders of 1933 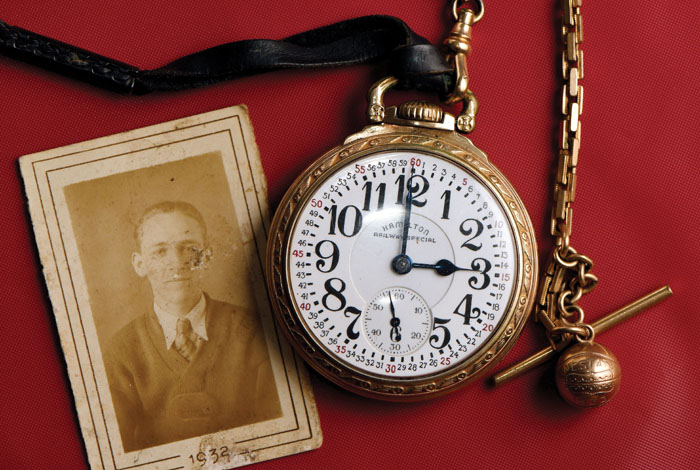 (Second of a two-part series. Read part one here)

SPENCER — Spencer took another shot at immortality in 1931, again reaching the Class B Western District final in the NCHSAA playoffs. Again the district final was played in Salisbury. Gordon Kirkland, an  Elon graduate who had coached the Boyden High squad to a pair of wins over Spencer that season, served as the referee. Bakersville, a mountain school that eventually would become Mitchell County, beat Spencer. Then Bakersville went on to top Rose Hill in the Class B state championship game held in the “Tin Can.” The NCHSAA has that one wrong.  It has Bakersville beating Spencer for the state championship, but both are Western teams.

The 1932 season would be relatively quiet for the Railroaders, but that wouldn’t be the case in 1933.

The 1933 season would be Herman Brown’s first serious whirl at organized basketball. Herman had nearly died from a ruptured appendix that had cost him a year of athletics, but he’d become a baseball standout.

He was relatively short and had always been the manager of the basketball team, but Coach Clark needed him to put on a uniform and play as a senior in 1933. The Railroaders needed the extra manpower. Brown would make it a seven-man team. He joined Bill Sharpe, Fred Peacock, Foy Grubb, Zeke Grossman, Jack Hutchins and Charlie Mast.

Mast was  a bit of a ringer. He could play, and he was a new arrival in town. He’d come from High Point Maybe his father had just gotten a job with the railroad.

Spencer was demolished by the UNC freshman team, 34-6, and lost at Boyden early in the season,  without Grossman, 25-10, but for the most part, Spencer tore through the opposition.

Spencer held Kannapolis scoreless in the first half in 20-14 victory.  In a breezy win against Mocksville, Peacock poured in an unheard of 14 points.

“My dad said was the biggest thing was they learned to play with less dribbling and a lot more passing,” Arlie said.

On Jan. 24, 1933, the Spencer team took part in a unique game against an all-star team of girls from St. Louis. Those girls had gone undefeated on their nationwide barnstorming tour, but they met their match in the Spencer boys, who rolled, 36-22.

In another interesting matchup in the winter of 1933, Spencer edged Catawba College, 22-21.

In mid-February, late in a very short season, Spencer avenged its loss to Boyden’s Golden Tide with a wild, 28-27 overtime victory in Spencer. Peacock tied that game with a clutch free throw, and Grubb won it with another one.

Still, as good as the team was, Spencer fell short of the state championship.

Jonesboro, a school in Lee County, had three N.C. State recruits (Sam Womble, Neil Dalrymple, Len Matthews) and went undefeated in 1933 on its way to the NCHSAA’s Class B  championship. The NCHSAA record book says Jonesboro’s opponent in the final was Western champion Dobson, a school from Surry County.

So what about that gold ball that Arlie Brown owns? There’s an explanation.

Spencer didn’t win the NCHSAA state championship in 1933, but it arguably won something bigger. What the Railroaders won was that postseason invitational tournament at N.C. State where the top 16 Class A and top 32 Class B teams gathered. The surprise was that Spencer was assigned to play in the Class A bracket of the tournament with the larger schools. It appears, after poring through the accounts in the Post, that  Spencer moved up in class as a replacement for Boyden, which declined to participate for unspecified reasons.

It was a three-day tournament that began on Thursday afternoon, March 2, and concluded on Saturday night, March 4.

Spencer opened the event by battering North Wilkesboro and  finished it by stampeding to a 26-10 victory against Fayetteville in the championship game. After that victory, each of the Spencer players received a gold basketball, and the school earned that impressive silver cup.  Grubb was named first team all-tournament, while Peacock and Mast were second team.

And still the 1933 season continued. The Charlotte News conducted a popular tournament that included all the area county champions. Spencer represented Rowan County. Playing at Catawba, Spencer beat Kannapolis, the Cabarrus champs, 18-17, when Mast made a buzzer-beater from halfcourt. Also at Catawba, Spencer rolled against Oakboro, the Stanly champs, 36-24.

In the final game that the 1933 Railroaders played together, they lost to Union County champ, Waxhaw, 24-23, in the tournament semifinal game played at Charlotte Central High.

Herman Brown,  the seventh man on that seven-man basketball team did his best work for Spencer on the baseball field. Baseball was his sport and he played for an extraordinary coach named Lemuel Darr Shealy. Shealy had 11 brothers and sisters. His brother, Al, who was three  years older, pitched in the major leagues and was a teammate of Babe Ruth and Lou Gehrig on the 1928 New York Yankees.

“I know my dad made the varsity baseball team as a freshman at Spencer and he learned a lot from Shealy,” Arlie said.

All-State in high school in South Carolina in three sports, Darr Shealy graduated from Newberry College in 1926 and was inducted into that school’s sports hall of fame 53 years later.  Mostly a second baseman, he took a shot at minor league baseball and was good enough to get at-bats for the Class A Atlanta Crackers in 1931. Shealy came to Spencer at some point in the 1930s.

While he was teaching  and coaching in Spencer, Shealy spent summers playing ball for the Class D High Point-Thomasville Hi-Toms, In 1938, when he was 35 years old, he was the batting champion of the North Carolina State League with a .357 average. He produced 114 RBIs in 107 games.

World War II changed things for all Americans. The members of the 1933 Railroaders basketball were in their mid-20s when Pearl Harbor pushed the United States into the war in December, 1941.

After the United States Army Transportation Corp was created in July, 1942, Sharpe spent 18 months of World War II with the 743rd Railway Operating Battalion in Europe. He was discharged as a sergeant in 1946. His daughter, Billie, was the first girls basketball star at North Rowan in the late 1950s. Sharpe was a railroad brakeman most of  his life and died in Rowan County in 1985.

Peacock spent 17 months of World War II in China as an engineer. He was discharged as a staff sergeant in 1946 and spent much of his working life as a skilled brick mason. He died in Rowan County in 1986.

Grubb, a three-sport star at Spencer and the captain of the 1933 Railroaders basketball squad,  became a standout for the University of North Carolina in two sports. A third baseman on the baseball team and a guard on the basketball team, he had some big moments, especially as a senior in 1938.

In the war, Grubb served as a lieutenant in the U.S. Navy. After leaving the Navy in 1946 and getting married at the First Baptist Church in Spencer, he accepted a job offer from General Motors in Winston-Salem.

Grubb eventually helped establish Mid-Carolina Bank in Greensboro and  later moved to Durham with Central Carolina Bank. He retired in 1980 as senior vice president. A Tar Heel fan to the end, he died in Durham in 2002.

Not much is known about Grossman and Mast. It’s probable they left Rowan County as they don’t turn up in the Post’s archives.

As far as Hutchins, a senior on the 1933 Railroaders, a good deal is known. He was a brilliant student, salutatorian at Spencer, and headed to Wake Forest. He played freshman football at Wake — he started at guard — and became editor of the school yearbook as a senior. After graduating, he went to medical school  for a year, but then he went to work for Duke Power as a chemist. His true passion was flight. He  joined the Army Air Corps in the summer of 1940.

In October, 1940, Hutchins served as the navigator for Averill Harriman’s diplomatic mission to the Soviet Union, a 24,700-mile round trip in a B-24 Bomber that broke records. Hutchins spent 18 days in a Moscow hotel between legs of that amazing journey that began in Newfoundland, Canada, and, after circling the globe, finally ended in Washington, D.C.

Hutchins was a 25-year-old second lieutenant, serving at a U.S. Army navigation school in Puerto Rico when he became the first Rowan County casualty of World War II. He died on Dec. 11, 1941,  in the Pacific while he was on what newspaper accounts described as a “secret mission.”

In 1942, Hutchins’ family was presented with a Distinguished Flying Cross for his famed 1940 aerial flight.

The Jack A. Hutchins American Legion Post was organized in his honor in Spencer in 1945.

A railroad man in World War II and for most of his life, Herman Brown’s last ballgames were played long ago for a High Point hosiery firm. He worked for the mill, played a little hoops and starred at shortstop for the mill’s semi-pro baseball team.

Herman has been gone for 32 years now, but his son still has that gold ball. It’s a reminder of great men and a great generation.