Prep basketball: The Spencer Railroaders of 1933 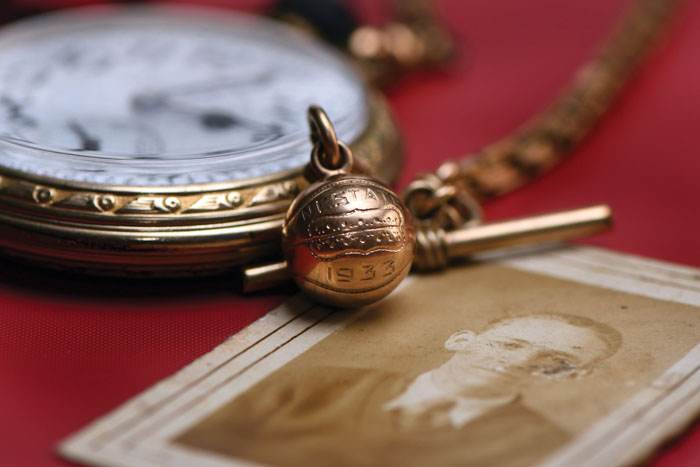 (Part one of a two-part series)

SPENCER —  The penny-sized gold basketball with two careful inscriptions —  “1933” and “N.C. State” — was a precious artifact to the late railroad man Herman Brown, and so that tiny ball also became important to his son, Arlie.

There were lots of stories surrounding that gold ball.

Arlie is pushing 70 now, but when he was a youngster in the 1950s, his father would share tales of teenage years spent in the depths of the Great Depression, scary days  in the 1930s when the next dollar, maybe even the next meal was uncertain for working-class people. Eventually Herman, who was born in 1914, would get around to talking about the joy he derived from playing baseball and basketball. That was his release in harrowing times. Arlie also loved sports, so those were the stories that resonated deepest and lingered longest.

Especially when it came to that gold ball. Seven boys from Spencer High received those gold balls on March 4, 1933, after they won a statewide basketball tournament. No doubt Spencer’s coach, O.C. Clark, got one as well.

“My dad talked a lot about that championship team, and I listened to everything he ever had to say about it,” Arlie said. “They played in a day when basketball was a lot different. There was a jump ball after every basket, so scores were really low. My dad told me Fred Peacock jumped center for Spencer, although he was only about 5-foot-10. And they didn’t have anything like Gatorade then, so Coach Clark would give them lemons to suck on when they got tired.”

There were a few times that Herman played ball with Arlie and his friends. Herman shot his free throws underhanded much to the amusement of the boys and he shot a two-handed set shot from long distance. That’s how they all had done it in the 1930s.

The strangest part of Arlie’s father’s championship story was he insisted that Spencer, a small Class B school, had once won the Class A championship. That didn’t make any sense, but Arlie never doubted his father had his facts straight.

Arlie has spent a lot of time over the years wondering if any of those other gold balls survived. He’s never been able to locate any of the others, although it stands to reason they would not have been intentionally destroyed or lost. Maybe they were passed down to sons or daughters. Now they might be in possession of grandchildren.

Herman Brown secured that ball in a dresser drawer for decades, although he would take it out and check on it periodically. He’d  look at it and smile. His attachment to that simple ball wasn’t hard to figure out. It was a reminder of younger, healthier days, of a coach he respected and teammates with whom he shared a permanent bond. It also was a reminder of a teammate, the brightest and most talented of all of them, who had died in World War II at age 25.

“I remember one year my dad had a birthday coming up, so we sneaked that ball out of the dresser for a few days, took it to the local watchmaker and had it put on a nice chain he could carry with him,” Arlie said. “That would have been in the 1950s. I was about 8 years old.”

Herman Brown, flagman and baggage handler, was delighted with that gift, for now the ball was mobile and could go wherever his travels took him. He had the ball and chain attached to the other vital piece of jewelry in his life, his railroad man’s watch.

Herman Brown passed away in 1986. The gold ball and chain and the watch were passed on to Arlie.

Arlie also worked on the railroad some, even toiled for a while alongside one of his father’s old teammates, a guard named Bill Sharpe.

“My dad always said the railroad is like the circus,” Arlie said. “It will get in your blood.”

The railroad had always been the lifeblood of Spencer. That’s how the town came to be in the first place in 1896. Spencer was halfway between Washington, D.C., and Atlanta on the Southern Railway line, so that’s where Southern Railway president Samuel Spencer established the shops that serviced the railway. A town of railroad men sprang up around those shops. By 1901, Spencer had 625 residents.

Within a generation, Spencer was known as a sports town as well as a railroad town.

When North Rowan (Spencer and East Spencer high schools were consolidated into North Rowan in 1958) charged to the 2A state championship in Chapel Hill in 1986, with great players such as Antione Sifford, Jimmy Kesler and Ralph Kitley, Arlie was as excited as anyone in the county. But it puzzled him when he read in the Salisbury Post that this was the first state title ever won by a team from Spencer. He almost brought that gold ball up to the Post then, 32 years ago, to see what the sportswriters had to say for themselves, but he’s not a pushy person. He shrugged it off. It was enough for him that he knew about the gold ball. He didn’t feel compelled to brag to the world.

The North Carolina High School Athletic Association is a sound keeper of records, for the most part, even on relatively ancient stuff that dates back to the 1930s. Some mistakes can be found, but you can look up, for instance, that the Spencer High Railroaders won the Class B basketball state championship in 1930. That’s accurate.

That 1930 season was actually the first year that the NCHSAA basketball playoffs were divided into Class A and Class B. Prior to that it was just open competition for everyone, with no divisions based on school size. A third division, Class C, would be added by the NCHSAA in 1939.

The 1930 Spencer state champions were led by Grossman, the captain and the finest passer and dribbler anyone in Spencer had ever seen. The Post normally used only surnames in sports stories. Holt, Lanning, Swicegood and Simmons also were good players for Spencer.

In the game for the championship of the Class B “Western District” in 1930, Spencer had the advantage of playing in nearby Salisbury, so it probably had the support of 90 percent of the crowd. Welcome, one of the schools that eventually would be consolidated into North Davidson, provided the opposition.  Boyden High coach Terry Wood served as the one-man officiating crew. T.S. Cheek, who had learned basketball coaching in Lumberton and Dunn, was Spencer’s coach. Spencer trailed at halftime but the Railroaders held Welcome to three points in the second half and rallied to win, 29-21. After Spencer got the lead, Grossman, apparently a magician with a basketball in his hands,  dribbled around with Welcome players unsuccessfully chasing him around the gym.

State championship games for most of the 1930s were held at the University of North Carolina’s “Tin Can,” a chilly, steel facility where the Tar Heels played home games until Woollen Gym opened in 1938 to meet the demand of  basketball’s growing popularity.  Woollen Gym would be replaced by Carmichael Auditorium in 1965. In turn, Carmichael, which evolved into Carmichael Arena, would give way to the Dean Smith Center in 1986.

Providing the opposition for Spencer’s Western champs in 1930 was Eastern kingpin Trenton, a Jones County school about 25 miles west of New Bern. It was no contest. Spencer romped, 33-11. Grossman put on another dribbling exhibition, while Holt poured in 14 points.

Spencer was one of 48 schools accepted for a statewide tourney held at N.C. State in early March. That massive, three-day event, at that time, was arguably a bigger deal than the state championship. Hundreds of schools applied to enter the tournament, but  hotel accommodations were limited. Only the 16 Class A and 32 Class B teams deemed to be the best of the best were invited to Raleigh. That tournament was a whirlwind. To take the Class B title, you had to win five games in three days. Spencer did its best, but it didn’t reach the Class B final. The Railroaders ran into a buzz saw from Enfield, a school from Halifax County, in the northeastern part of the state. The Enfield youngsters received small gold basketballs for taking first place, while the players on the runner-up team accepted silver balls. The winning school also received a handsome cup as a permanent trophy.

See the second part of this series in Sunday’s Post.