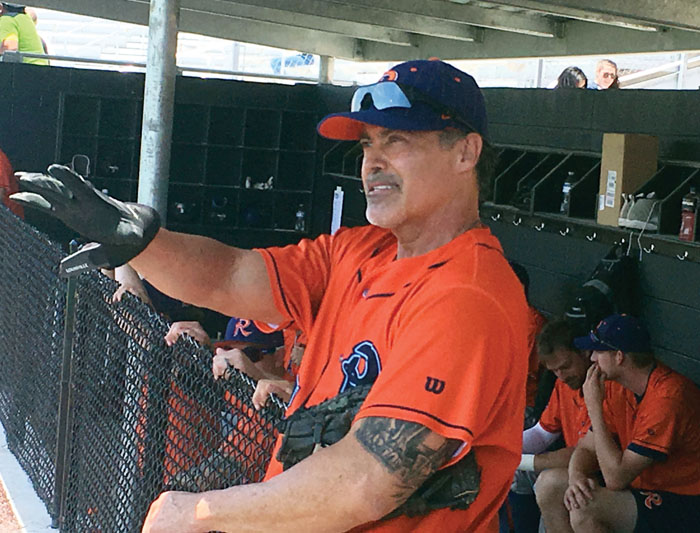 CLEBURNE, Texas (AP) — Rafael Palmeiro isn’t playing for an independent minor league team at age 53 just so he can be teammates with his son.

Palmeiro said he knows there are people who think he has lost his mind, but he is serious about wanting to make a big league comeback nearly 13 years after his career ended under a cloud when he tested positive for a banned steroid.

“I’m doing it because I love the game first of all,” Palmeiro said Thursday. “And because I want to get back to proving to myself that I can do this and maybe for some of those people that think that I cheated, they might think again and say well, wait a minute, he’s 53 years old, he’s playing at this level, he’s playing in the big leagues, he’s producing. Maybe some of those will say, OK, he did it legitimately.”

Palmeiro joined the Cleburne Railroaders after not getting a non-roster invite from a big league team during spring training or the chance to play for an MLB-affiliated team in the minors. Palmeiro and his 28-year-old son Patrick, a third baseman, were introduced by the second-year American Association team and then played in the first preseason game .

“I know that I can do it and I was looking for an opportunity,” said Palmeiro, who played first base and went 1-for-2 with a strikeout and a sharp single.

It was about a 45-mile drive from the Texas Rangers’ ballpark, where Palmeiro played 10 of his 20 major league seasons and hit his 500th homer in 2003. The four-time All-Star also played for the Chicago Cubs and Baltimore Orioles.

The elder Palmeiro took a called third strike on a tough slider in his first at-bat, then led off the ninth with a sharp single against a travel team from New Jersey. Patrick Palmeiro had a single and walked, and also had a nifty sliding grab at third before getting up and completing the play with a throw to his father.

“He’s going to hit,” Patrick Palmeiro said. “He was born to hit. We go hit in the cage every day and the show he puts on in the batting practice, it’s impressive … This guy doesn’t pick up a bat for 10 years and he looked like he just stopped playing, getting ready for spring training like his last game was in September.”

One of only six players in MLB history with 3,000 hits and 500 home runs, Rafael Palmeiro was shunned by Hall of Fame voters. He fell off the ballot four years ago after getting less than the 5 percent vote necessary to stay.

While he has never denied testing positive in 2005, Palmeiro said he never intentionally took any banned substances and that a tainted vitamin shot caused his failed test.

“When I was done with my career, the way it ended, I wanted nothing to do with baseball,” Palmeiro said. “It didn’t end the way I wanted it to, especially the way that I worked throughout my career and what I put in and the kind of career that I had. … It took me a long time to get to the point where I am today.”

Palmeiro says he actually feels better physically than when he was playing. He worked out this offseason with both of his sons. The younger son, Preston, is in the minor league system of the Orioles , his father’s last team.

As for his Hall of Fame chances, Rafael Palmeiro said he is not trying to get into a big league game just to restart the clock on ballot eligibility, which is five years after a player’s final game.

“My time came and went,” Palmeiro said. “That clock has gone, it’s dead, it’s not going to get restarted. I don’t want it. If it happens the other way with the veterans committee, I’ll accept it and move on.”

Palmeiro said he had no idea if voters were taking a different stance as it gets longer since the rise in performance-enhancing drugs in the 1990s before testing and penalties started. But he has noticed the increase of votes for players from that era, including home run leader Barry Bonds and seven-time Cy Young winner Roger Clemens.

Bonds and Clemens both received more than 56 percent of the vote last year after being around 35 percent in 2014. Ivan Rodriguez, one of Palmeiro’s former teammates, was inducted last year.