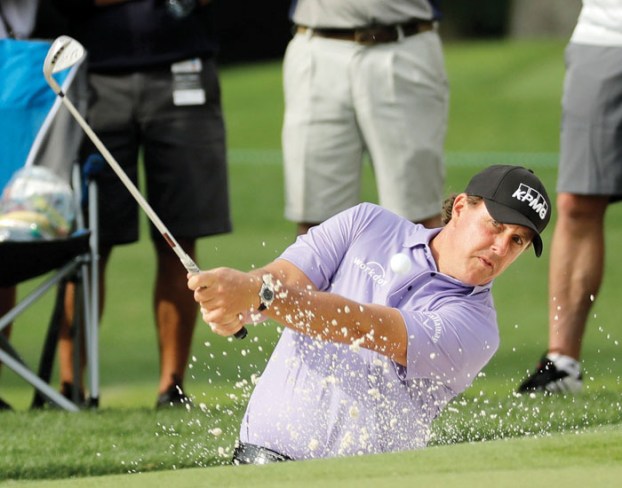 AP Photo/Chuck Burton ... Phil Mickelson hits from a sand trap on the first hole during the third round of the Wells Fargo Championship golf tournament at Quail Hollow Club on Saturday. Mickelson shot a 64 and moved into 10th place. 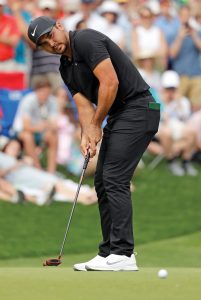 AP Photo/Chuck Burton … Jason Day, of Australia, putts on the 15th hole during the third round of the Wells Fargo Championship golf tournament at Quail Hollow Club in Charlotte on Saturday. Day leads by two strokes, heading into today’s final round.

CHARLOTTE (AP) — Quail Hollow was softer and shorter, producing one low score after another before the final groups even started Saturday in the Wells Fargo Championship.

When he sputtered at the start, there was no reason to panic that he wasn’t taking advantage of a great day for scoring. And when Day finally picked up his first birdie by blasting a 9-iron out of the rough with the wind at his back from 195 yards to 18 inches on the ninth hole, he was on his way.

Day made five birdies over his last 10 holes for a 4-under 67, giving him a two-shot lead as he goes for his second PGA Tour victory this year.

“I was just staying in my own world, staying in my lane and not really thinking about it too much,” Day said. “I knew that if I could just get myself in position … don’t do anything too silly out there and find a way to get back into the swing of things, that I could come out of this on the better half.”

Day finished with a daring play on the 18th. With his bare feet in the stream and the ball on the bank well above his feet, he hit a full wedge to the back of the green for a two-putt par.

Nick Watney overcame a double bogey on the par-5 10th hole with four birdies over his last six holes for a 66. He will be in the final group for the first time in nearly four years as he tries to win for the first time since a back injury two years ago.

“To get back in contention, that’s why I play golf. I’m super, super excited,” Watney said. “I’m just going to try to embrace everything that comes with tomorrow and hope I have a chance down the last.”

Peter Uihlein finished the front nine with five straight birdies and started the back nine with an eagle. He shot 62, one off Rory McIlroy’s course record, and wound up three shots out of the lead and in the penultimate group.

Phil Mickelson shot a 64, his best score of the year. He starts Sunday four shots out of the lead. McIlroy three-putted the last hole and still shot 66. As a testament to the conditions, all he did was shrug. “I didn’t play that well. The score sort of flatters me,” he said.

Tiger Woods, who started the third round on the same score as Uihlein, Mickelson and McIlroy, failed to take advantage on a course that was set up 228 yards shorter and was soft enough that players actually found pitch marks on the green. Woods finally got going on the back nine with three straight birdies, but a three-putt bogey on the final hole gave him a 68. He was nine shots behind.

Peter Malnati’s 36-hole lead didn’t last long. He had a pair of double bogeys, shot 75 and fell seven shots behind.

PGA Tour rookie Aaron Wise nearly had a collapse late until he salvaged a most unlikely bogey.

Wise, the NCAA champion from Oregon two years ago, pulled his approach left of the 18th green. It bounded over the stream to the other side. With his ball on a sharp downslope a few feet from the rock-framed banks of the stream, he considered a penalty drop that would have taken double bogey out of the picture. Instead, he tried a flop shot and his wedge slid under the ball for a whiff.

He hit the next one across the green to 40 feet, and knocked that in for bogey. Two bogeys over the last three holes gave him a 70.

“That was going to be a devastating hole,” he said. “So to turn it into a bogey … it gives me a shot tomorrow.”

Day is in charge, but not in the clear.

He has won four out of five times when he’s had the 54-hole lead on the PGA Tour, and it helps that he doesn’t have too much experience behind him. Watney hasn’t won in nearly six years. Uihlein still hasn’t won on the PGA Tour. Also three shots back were Bryson DeChambeau (66), Paul Casey (69) and Wise.

“I’d much rather be in this position than chasing,” Day said.

He already has won this year at Torrey Pines in a playoff over Alex Noren. Day has found the desire than he lost last year, and the 30-year-old Australian does not feel that far off from that dominant run two years ago that took him to No. 1 in the world.

“I feel like it’s right on the end of the tip,” he said, smiling and rubbing together the tips of his fingers. “I’m driving it better than I ever have before in my career. I’m No. 1 in putting and my short game has come back nicely. I definitely think it’s just around the corner. It’s not too far.”

Giants make it two in a row over Atlanta

ATLANTA (AP) — Buster Posey and Andrew McCutchen each had three of San Francisco’s 18 hits, leading the Giants to... read more