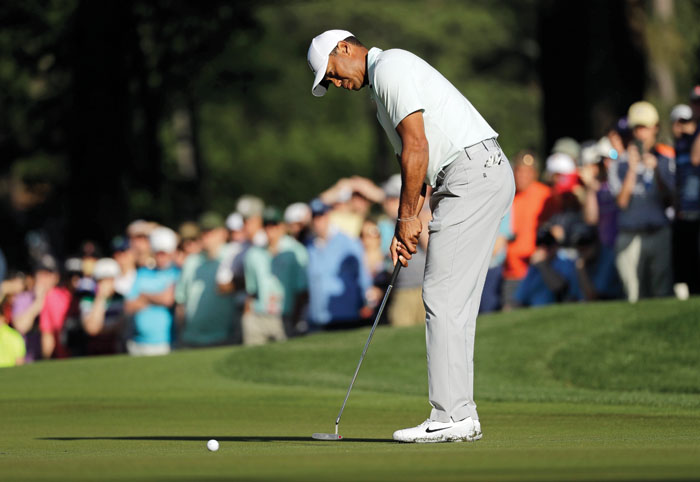 Tiger Woods putts on the 12th hole during the second round of the Wells Fargo Championship golf tournament at Quail Hollow Club in Charlotte, N.C., Friday, May 4, 2018. (AP Photo/Chuck Burton)

CHARLOTTE (AP) — Tiger Woods has been at Quail Hollow four days, apparently still not enough time to adjust to the greens.

At least he gets two more days to figure it out.

Woods made his only birdie on his final hole Friday in the Wells Fargo Championship, an 18-foot putt on the par-4 ninth hole that assured he would make the cut. He stretched out both arms in mock celebration after his 2-over 73.

“My feels aren’t used to greens at this pace,” Woods said. “I feel more comfortable on faster greens. I’ve had ample time to make the adjustment, and I just haven’t. I haven’t felt comfortable hitting the putts as hard as we have to hit them this week.”

Woods has taken 64 putts over two rounds and was at 2-over 144, nine shots behind Peter Malnati. The tie for 48th is Woods’ worst position through 36 holes in his last five tournaments dating to a missed cut at Riviera.

He had only seven birdie opportunities inside 20 feet, even though he kept the ball in play for the most part.

Woods three-putted twice for bogey, including the par-3 sixth hole when he had a downhill birdie chance from about 18 feet. His other bogey was on No. 11, when the crowd went from cheering to groaning as his approach spun back toward the hole, by the hole and then down a slope and back into the fairway. His chip checked up about 8 feet short of the cup and he missed that.

“I’ve hit it good enough to be right up next to that lead,” Woods said. “If I just putt normal, I’m right there. I’m hitting it fine, and I just need to make some putts. Hopefully, this weekend I’ll hit it the way I’ve been hitting it and get a hot putter on the weekend. You never know.”

At least he has the weekend. That birdie putt put him just inside the cut line at 2 over, and the cut went to 3 over by the end of the round.

Quail Hollow is the only course where Woods has missed a 36-hole cut twice. He won this tournament in 2007, but missed the cut the last two times he played in 2010 and 2012. And he was still out of golf recovering from back surgery last summer when Quail Hollow hosted the PGA Championship.

Woods said he remembers the speed of the bent grass greens in 2012. And he heard players talk about how fast and slick they were at the PGA Championship.

This is a new course to him. It nearly was a familiar result until he all but assured himself of making the cut with that last birdie.

Even from the middle of the fairways on Nos. 1 and 2, Woods had to make 4- and 5-foot putts to walk off with par. He didn’t birdie any of the par 5s after being in greenside bunkers on two of them and leaving himself a 6-foot birdie putt on the other.

He walked off the seventh green holding his putter, one hand on the grip, the other on the head, as if he wanted to break it in half.

“I certainly was frustrated, there’s no doubt about that,” Woods said. “I missed so many putts. But I’ve got to put it behind me and move on to the next one and hit the next shot with just as much commitment. And I did that all day and, unfortunately, I didn’t make anything until the last hole.”

But that was an important putt. It effectively secured two more rounds.