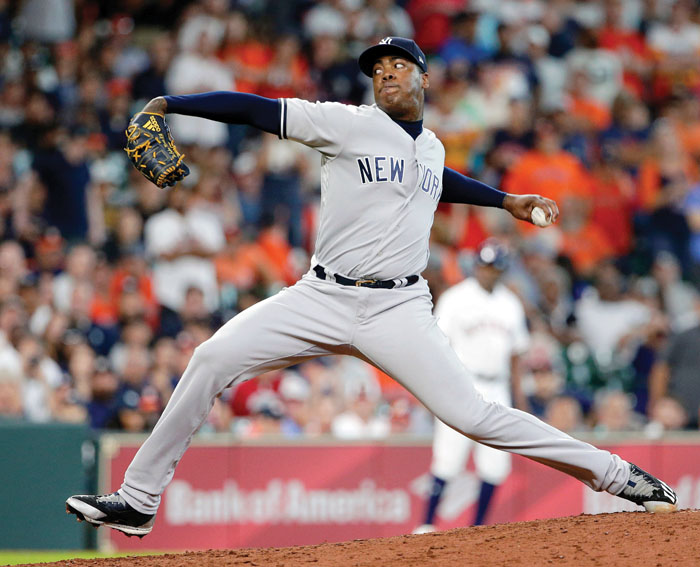 HOUSTON (AP) — Aroldis Chapman struck out AL MVP Jose Altuve on three straight 101 mph fastballs with two on to end the game, and the New York Yankees got a key hit from rookie Gleyber Torres during a three-run rally in the ninth inning to seesaw past the Houston Astros 6-5 Thursday.

The Yankees won a wild one to take three of four from the team that beat them in Game 7 of the AL Championship Series last October.

New York took a 3-0 lead into the seventh, trailed 5-3 going into the ninth and let a bounced third strike give the Astros their final chance.

Jeremy Hellickson and four relievers combined on a five-hitter for Washington, which has won a season-high five in a row.

Sammy Solis (1-1) retired the only batter he faced, ending the sixth to keep the game scoreless. Sean Doolittle recorded the last five outs for his sixth save.

Pittsburgh’s Trevor Williams (4-2) allowed only two runners over the first five innings. Wilmer Difo led off with a single, and after Bryce Harper flied out, Turner hit his second home run of the season.

PHOENIX (AP) — Arizona reliever Jorge De La Rosa threw a pair of run-scoring wild pitches during an eighth-inning rally that sent the Dodgers to the victory.

The Dodgers scored four times in the eighth and handed Arizona its first two-game losing streak this year. The four-game split ended the Diamondbacks’ string of nine straight series victories to start the season.

The victory in the second game was No. 1,500 for Terry Francona, who became the 24th manager to reach the milestone.

Erik Gonzalez had four RBIs for Cleveland. Plutko (1-0) allowing three runs — all on homers — and six hits in 7 1/3 innings.

In the opener, Toronto’s Yangervis Solarte hit his first career grand slam with two outs in the 11th inning. Solarte went 8 for 10 with seven RBIs in the doubleheader.

Mazara hit a two-run double off Price (2-4) in the third. He belted a towering three-run homer in the fourth as the first batter after Price was pulled from the game. Mazara’s sixth homer gave Texas a 10-3 lead.

Mookie Betts connected again for Boston in the third, his major league-leading 12th homer coming a day after he went deep three times at Fenway Park against Kansas City. Betts also had a two-run double and a sacrifice fly.

CHICAGO (AP) — Trayce Thompson homered with two out in the ninth, and the White Sox stopped a four-game slide.

Thompson connected against former White Sox reliever Addison Reed (0-2), driving a 3-1 pitch 403 feet to left. It was Thompson’s third homer in 43 at-bats this season and third game-ending shot of his career.

Chicago trailed 5-1 in the fourth inning. Nate Jones (2-0) got the win, retiring his only batter.

Salvador Perez, Jorge Soler and Alex Gordon homered for the Royals, who have quietly gotten on track offensively after a miserable start.

Kansas City pounded out 13 hits in all against Mike Fiers and the Tigers’ bullpen. Reliever Chad Bell (0-1) allowed five runs and five hits in 1 2/3 innings.

Eric Skoglund wasn’t much better on the mound for Kansas City, but Kyle McCarthy (3-0) wiggled out of a key sixth-inning jam before pitching a clean seventh to earn the victory in relief.

Detroit slugger Miguel Cabrera left with a strained hamstring in the sixth inning. He planned to test it on Friday.