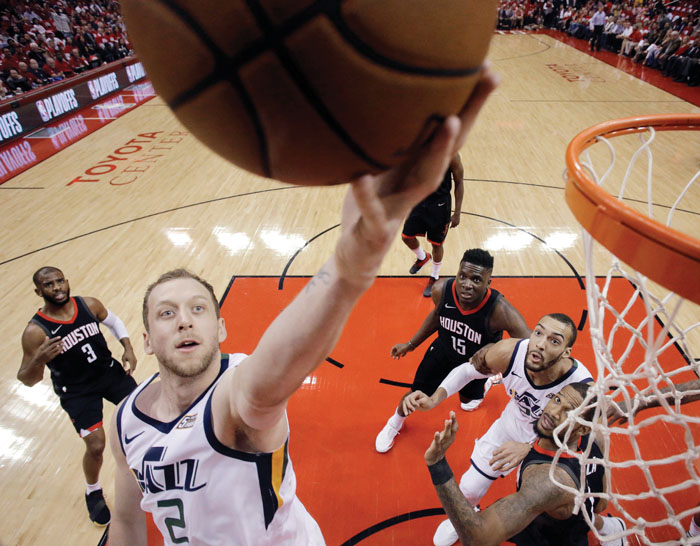 Utah Jazz forward Joe Ingles (2) drives to the basket during the first half in Game 2 of an NBA basketball second-round playoff series against the Houston Rockets, Wednesday, May 2, 2018, in Houston. (AP Photo/Eric Christian Smith)

By KRISTIE RIEKEN, AP Sports Writer
HOUSTON (AP) — Utah had a four-point lead in the fourth quarter on Wednesday night when Donovan Mitchell missed a jumper and sailed above three Houston Rockets to grab the rebound and finish with a nifty one-handed slam.
He did it right near the Jazz bench and his teammates went wild, cheering and pretending to fall backward on each other in awe.
Joe Ingles led the Jazz with a career-high 27 points, but it was the star rookie who provided the highlight of the night as the Jazz evened the Western Conference semifinals 1-1 with a 116-108 win.
Ingles made a career-best seven 3-pointers and Mitchell added 17 points and a franchise rookie-record 11 assists for his first game this postseason where he scored fewer than 20 points and didn’t lead the team in scoring.
But he certainly provided an emotional boost to his team with his highlight-reel worthy play. He smiled broadly when it was brought up postgame, and said he was just trying to get the rebound on his miss when he made a split-second decision.
“I just happened to be up there,” he said. “So I said: ‘Why come down with it?'”
The Jazz squandered a huge early lead before using a big fourth quarter to regain control and head home for Game 3 on Friday in Utah with a chance to take a series lead over the top-seeded Rockets.
Houston coach Mike D’Antoni said Mitchell was the key to the win even though he didn’t lead the team in scoring.
“He was breaking us down,” D’Antoni said. “He was getting in there and was finding guys in the corner. He’s a handful whether he’s finishing or not.”
The Jazz were behind by two with eight minutes left before using a 16-2 run to pull away.
After trailing by 25 points at halftime of the 110-96 loss in the series opener, the Jazz jumped out to an early lead in this one and led by as many as 19 in the first half.
“Last game, we came out completely opposite. Tonight, they kind of caught us off-guard,” Houston’s James Harden said. “We adjusted to it in that second quarter, but we can’t get down 19 no matter who we’re playing.”
Houston regained the lead in the third quarter but couldn’t keep pace with the Jazz in the fourth as their normally potent offense went cold.
Harden had 32 points and 11 assists, and Chris Paul added 23 points as Houston fell to the Jazz for the first time this season after winning the first five meetings.
Jazz coach Quin Snyder was pleased at his team’s balanced scoring effort on a night six players finished in double figures, and he raved about the contribution of Ingles.
“Every time Joe has needed to step up his game, he has been able to,” Snyder said. “He’s committed to that. He knew tonight he would need to make some shots and he was able to do it.”
Houston was down by one entering the fourth but Utah scored eight straight points on 3-pointers from Dante Exum and Jae Crowder before Mitchell’s dunk made it 100-94.
Harden made a basket after that before Utah scored another eight straight points, with two 3s from Ingles, to make it 108-96 with 4 1/2 minutes left.
Harden ended a 2 ½-minute Houston scoring drought with a 3-pointer about a minute later that was the start of a 9-3 run that got the Rockets within 111-105 with 1:46 left. But Rudy Gobert made one of two free throws before Exum put it out of reach with a dunk.
Utah led by nine before Houston used a 16-5 run to go up 71-69 for its first lead since it was 6-5 with about seven minutes left in the third. The Jazz went back up 86-85 by the end of the period.
After taking just four shots in Game 1 and finishing with 11 points, Gobert got going early Wednesday and had 13 points on 5-of-7 shooting by halftime. But he was mostly quiet after the break, and finished with 15 points and 14 rebounds.
TIP-INS
Jazz: Snyder said before the game that he didn’t know when point guard Ricky Rubio would return. … Utah assistant Igor Kokoskov was hired as head coach of the Phoenix Suns on Wednesday. … Ingles got a technical in the second quarter for arguing with Paul.
Rockets: Luc Mbah a Moute had four points and four rebounds in his second game back after missing the first series after dislocating his right shoulder on April 10. … Paul also received a technical for barking at Ingles. … Clint Capela finished with 21 points and 11 rebounds.
THEY SAID IT
The notoriously low-key Harden when told by a reporter that he looked irritated by Utah’s defense on Wednesday: “I look like that all the time. That’s just my facial expression.”
UP NEXT
The series moves to Utah where Game 3 is Friday and Game 4 will be played on Sunday.