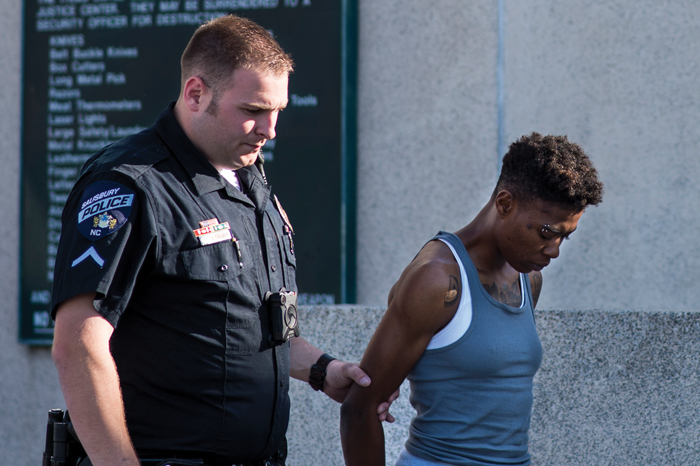 Doreen Richardson walks from the Rowan County Magistrate's Office to the Rowan County Detention Center after being charged with the murder of Quavist Phillips on Tuesday. Rebecca Benson/Salisbury Post

SALISBURY — Just hours after Salisbury police identified a man who was found dead in the middle of Ackert Avenue on Tuesday, investigators charged a woman with his murder.

Officials said Richardson’s family contacted Rowan County Sheriff Kevin Auten and brought her to him. Auten turned her over to the Salisbury Police Department for questioning.

She remains in the Rowan County Detention Center without bond.

A burgundy, older model Ford Mustang was parked in the middle of the 300 block of Ackert Avenue, near Tillman Street. Police set up a tent and tarp to cover Phillips’ body as they gathered evidence.

Police Lt. Greg Beam said earlier that he could not comment on whether the shooting was the result of an altercation. He said officers responded to several 911 calls reporting that a gunshot victim was lying in the street.

Police did not provide a motive. Beam would not comment on whether it was a random crime.

Family members said Phillips had been traveling back and forth from South Carolina to Salisbury. Many of his relatives who live in Salisbury hurriedly arrived at the scene while investigators remained there.

Some tense and emotional moments turned to hours as family members and friends arrived. Many waited at the corner of Ackert Avenue and Tillman Street and consoled each other.

One relative had to be held back as he angrily approached a police officer demanding information. The man was eventually driven from the scene by a relative.

Another relative could be heard pleading with family members to calm down and let police officers do their job. An uncle of the victim burst through crime scene tape at one point; three officers and a friend held him back as he cried.

Phillips’ sister was seen consoling others and at times overcome with emotion herself. She declined to comment for this story.

A cousin said Phillips was a good guy who was trying to better his life. He declined further comment.

Police called for emergency responders after Phillips’ mother appeared to have had an anxiety attack. People who live at the corner of Tillman Street and Ackert Avenue tried to console family members as they sat and stood on their front lawns.

A homeowner who did not want to provide his name said there wasn’t much he and his wife could do to bring peace to the family. He said they are both ministers and they prayed with the family.

“The only thing you can do is comfort them,” he said.

The homeowner told the Post that he had looked out his window and saw what appeared to be someone lying in the road and someone running.

He said before he made it outdoors, he saw multiple police cars.

He said neither he nor his wife heard gunshots, but noted that their television was loud.

Police remained in the neighborhood well after 2 p.m. talking with neighbors and family members. Officers blocked off the corner and the front yards of a few houses on Ackert Avenue with crime scene tape.

In addition to Salisbury police detectives, agents with the SBI assisted in the investigation.

Phillips’ death is the third murder in the city in 12 days. Police said the two prior homicides are unrelated.

Overton, Knox and Horizons Unlimited are all off Mahaley Avenue, less than a mile from the murder scene.

During a code yellow, classes continue as normal but inside and outside doors remain locked. The schools were placed on lockdown at 11:20 a.m., and it was lifted about 11:50 a.m.

Anyone with information about this homicide or others is asked to contact the Salisbury Police Department at 704-797-4253 or Salisbury-Rowan Crime Stoppers at 866-639-5245.

Head in the clouds: Phillip MacNutt one of few…