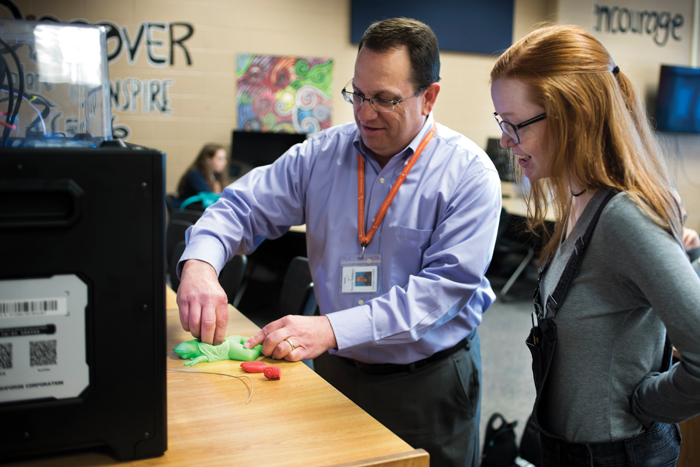 SALISBURY — When students tell Chip Gobble they don’t like to read, the Carson High School media center coordinator just tells them they “haven’t found the right book yet.”

In the 12 years he’s been working as a school librarian, it’s one of the few things that hasn’t changed. Even the job title has shifted.

“Officially, we’re media center coordinators,” Gobble said. “But at the heart of what we do, we’re still librarians.”

There’s a lot more to being a media center coordinator than scanning barcodes and shelving books. In many ways, they are the cog that keeps the wheel of learning turning.

“Really at the core of libraries is the idea of access. We make it so that people can get to what they need — and there’s no financial barriers or other barriers,” said Stephanie Walker, media center coordinator at Southeast Middle School.

The arrival of the personal computer and the internet in the mid-1990s drastically changed the way people access and interact with information.

Scruggs has 32 years as a librarian under her belt and still remembers the days when schools set up their first computer labs.

“It was still very much book-focused, paper-focused,” she remembers. “Whereas now it isn’t. It’s all changed based on the number of computers we have access to in the school.”

Now, every student that comes through North Rowan has a laptop, thanks to Rowan-Salisbury Schools one-to-one initiative.

Instead of pulling out encyclopedias from the reference section, students have a world of knowledge at their fingertips .

“That’s the way it is now, and that’s fine,” Scruggs said. “Back before we had computers, you needed a huge reference collection, you needed a huge nonfiction collection, because that’s the only way you had to access information. Well now, these kids have ibooks. So if they need research on the Constitution, they don’t need to go to the media center and do research on the Constitution or check out a reference book.”

Scruggs and other librarians have pared down their reference and nonfiction sections. Many of the books were outdated anyway, Scruggs said. While the shift has opened space and made book collections look smaller, it’s also changed the way students — and media center coordinators — interact with information.

But media center coordinators believe that makes their job all the more important.

“One of the most important things that we do is help students, help teachers navigate all the information that’s out there,” Gobble said. “We have more information at our fingertips than we ever did. But we also have a lot of information noise. And helping people filter through the noise to get to the info they need is still what we specialize in. … And if it’s not done through the library, I’m not sure where that’s gonna happen.”

In a technology- and information-driven age, librarians are no longer the guardians of knowledge. Instead, they’re the guides.

“Research as a skill has moved from being mostly print to mostly online, and that requires a little different skill set than what students were using before,” Gobble said.

Instead of helping a student find the best reference book, librarians like Scruggs teach students how to identify accurate information and vet sources.

“So we look for ways to teach them how to do better research, smarter research,” she said.

Walker and others help teach younger students how to properly use the technology and tools they have.

“Part of it is getting them to see that it’s more than a toy,” she said. “That it can help them do real things that they’re interested in doing.”

“The heart of it is the same, but I think it looks different,” Walker said.

The rise of technology has changed more than just the book collections; it’s also changed the very makeup of libraries.

At Overton Elementary School, media center coordinator Jessica Tucker helps run the school’s STEM lab. Corners of the library are devoted to the school’s makerspace — an area where kids can tinker, build and problem-solve.

“Now here in the library, we have 3D printers, resources for coding, robotics — which we didn’t see that in the libraries 10 years ago,” Gobble said.

Some of these subjects aren’t covered in classes, which means that school libraries are providing yet another valuable resource.

“We create the space for them to explore that job skill or career skill that’s not in our curriculum,” Gobble said.

For some media centers, technology has brought drastic change. Next year, North Rowan High School’s media center will become a large “innovation classroom.” The school library will move to a small nook in the cafeteria.

Scruggs said she’s “weeded out” her collection to the books her students love the most — because, despite everything, students haven’t stopped reading.

High school classes also don’t take weekly trips to the library, as they do in elementary or middle schools — something Scruggs said cuts down on a lot of her traffic. She’s hoping that the new location will give students better access to books.

“I’m hoping that it will get used more and that it will increase our book circulation,” she said. “Because if they’re not allowed time to come (to the library), it makes it very difficult for them to check out a book. So I’m going to take it and use it and make of it what I can.”

Scruggs will work in a small room nearby, ready to help students in need.

“The place itself is not sacred, I don’t think,” she said of the original library space. “I don’t think my role is any less because I’m not sitting in that room.”

No matter what the library looks like or where it’s located, some things about the job never change — like introducing a student to his first good book or helping him solve a problem or figure out the future.

No matter what their title is, media center coordinators still love the job.

“Every day’s different. Every day’s a challenge and fun,” Scruggs said.

For many students, the library is — and always will be — a place of refuge.

“It is still that way in 2018,” Tucker said. “It is a safe haven for a lot of kids. … Kids just want to retreat here. They love books in their hands, or maybe they love tinkering and having something in their hands. And I hope this place never goes away. I hope that we’ll always need school libraries.”