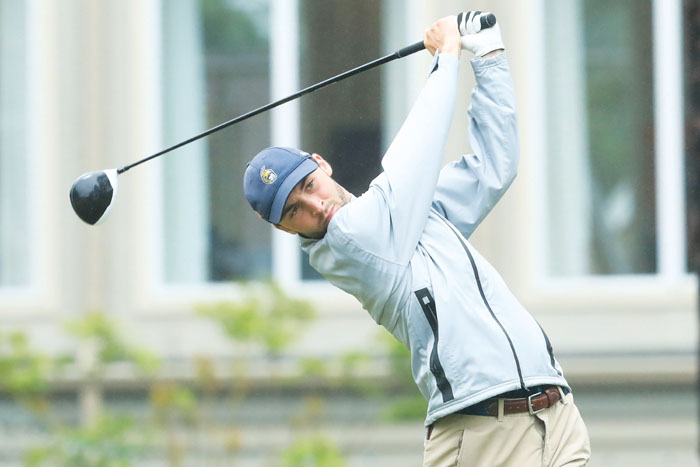 Carlos Morales/UNCG photo ... UNC Greensboro’s Nick Lyerly, of Salisbury, tees off during the Southern Conference Tournament at Pinehurst No. 9 on Tuesday. Lyerly fired a 3-under par 69, taking medalist honors and leading the Spartans to their first-ever championship.

The Spartans’ team score of 882 (297-285-300) topped Chattanooga by five strokes and East Tennessee State by nine shots, ending the Buccaneers’ three-year hold on the top spot. UNCG had finished second each of the past three years to ETSU, by one stroke in 2016 and in a playoff in 2015.

“They had been so close the last few years and I know that the upperclassmen were wanting to win really, really bad,” said Lyerly last night, when reached by phone. “It felt good to get the team win and that way, we all get to go to the regionals. Just all the close calls that this team has had, I just really wanted to go out and play good, so the team could win. If I won, that was icing on the cake. The main thing — this team was due to win this tournament and it finally happened today.”

Individually, Lyerly had entered the final round tied for first place with three players, including teammates Bryce Hendrix and Josh Stockwell, and Furman’s Keller Harper. No one could match Lyerly’s 69. Stockwell and Harper shot 76s, falling to a tie for fourth place. Hendrix had an 80, slipping all the way to 11th.

Two others, Western Carolina’s Dylan MacQueen and Mercer’s Stanton Schorr, made charges to tie for second place behind Lyerly.

“I was really confident coming in, where my game was,” Lyerly said of his individual title. “We had a tournament at Irish Creek (Kannapolis) a couple of weeks ago and my ball-striking was maybe the best it had been the entire season, but I just couldn’t putt … it was terrible and it kept me from scoring.

“I made just a little adjustment and the putting came back,” continued Lyerly, the winner of many junior tournaments over the past few years. “I was still hitting the ball great this week and putted so much better. I don’t think I missed a putt inside five feet all week and at this level, you got to make all of the short ones. So, getting the putting back on track and continuing the good ball-striking … it just all came together this week.”

Only Lyerly and Schorr had under-par rounds on Tuesday. During Lyerly’s 69 in the final round, he shot 2-under 34 on the back-nine with birdies on holes 10 and 14. He also got off to a strong start, with birdies on the second and third holes.

“Those birdies got me off to a hot start but I followed those up with a bogey on No. 4,” recalled Lyerly. “But that could have been worse. I did a good job of limiting the damage to just a bogey there and that was key.”

Lyerly also said that the “real key” to his title and therefore, the team’s success, was the rebound from a tough start that he had in Sunday’s first round. He started the tournament 3-over par after the first five holes.

“The only reason that I was able to win, was that I kept it together on the first day,” he said. “Lately, if I go through a bad stretch, I get a little upset. If that happens, you’re not able to come back. On Sunday, I really focused on not letting that happen and was able to get back to 1-over after a few more holes. I went back to 3-over with four holes to play and was able to make two birdies coming in for a 73.

“That gave me a lot of momentum, going into the second round, and I really look at that as being the turning point for me,” continued Lyerly. “These 54-hour tournaments are marathons and I knew that I had to hang in there, especially for the team.”

With the performance, Lyerly earned SoCon Freshman of the Year honors and was also named to the all-conference and all-freshman teams. UNCG has won the freshman award five of the past six years, with junior Hendrix and sophomore Jonathan Brightwell winning the award the last two years.

UNCG’s Terrance Stewart was named the SoCon Coach of the Year after guiding the Spartans to win in the championship after finishing runner-up for the last three years. Stewart is the first coach in program history to win the award from the conference and had a league-best three golfers named to the all-conference team. The three all-conference selections matches last year as the most in program history.

Sophomore Jonathan Brightwell registered the second-best score of the day for UNCG at 3-over 75 and tied for 18th place at 12-over 228 (78-75-75). Brightwell earned the Pinnacle Award for the highest GPA on the championship-winning team.

Harper, a sophomore, earned the SoCon’s Player of the Year honors.

UNCG captured the automatic bid for the NCAA Regionals on May 14-16 — the program’s second NCAA appearance. The Spartans earned an at-large bid in 2014. The selection show for the regionals will be on May 2 at 5:30 p.m. on the Golf Channel.

NOTES: Lyerly’s freshman year is all but over. Today is the last day of classes, with exams next week. “It’s gone by real quick,” he said. … One of the regional sites is Raleigh, but there is no guarantee that UNCG will be heading there.