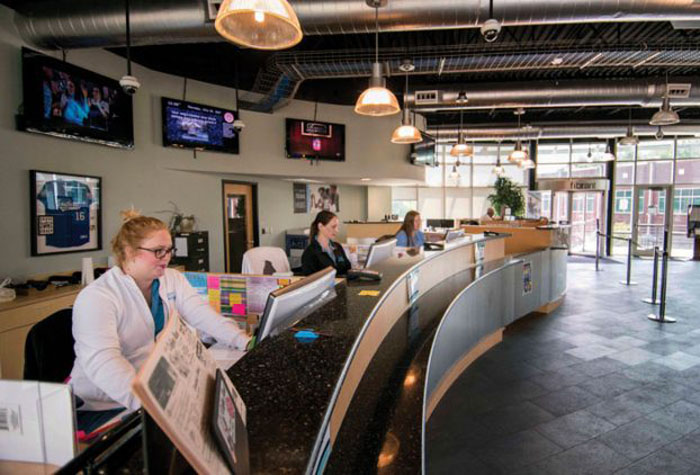 SALISBURY — After about 40 minutes of discussion, the Salisbury City Council on Tuesday evening unanimously approved a resolution that puts the Fibrant-Hotwire lease one step closer to reality.

Before its vote, the council heard a brief presentation from Peter Buck, the lawyer who has helped negotiate the lease between the city and Hotwire, and Tom Asp, an engineer and analyst for CTC Technology & Energy who has been consulting with the city on Fibrant since late 2016.

Buck said the final lease “is consistent with what’s been discussed” and with what was presented to the council at its last meeting.

“The lease is a lease by the city of the full Fibrant system,” Buck said. “Hotwire will pay rent based on the percentage of the revenues that Hotwire receives.”

Asp said the revenue-share offer Hotwire is providing is a “reasonable, fair-market value.”

“I think one of the challenges that you have here is that the fair-market value of the system is less than what the debt that you owe on the system is. And I think regardless of who came in, that was one of the big challenges,” Asp said.

But he said the large scale of Hotwire would bring in “immediate” savings to the city’s operations.

Buck said that both CTC and an independent accounting firm, Baker Tilly, reviewed the lease to make sure it is reasonable.

“Baker Tilly focused most specifically on the projections that Hotwire provided to determine whether they seemed consistent with the industry. And they have furnished reports, which (the council) has, basically supporting (that),” Buck said.

During council members’ comments, Mayor Pro Tem David Post said he heard from City Manager Lane Bailey during the council’s planning retreat that the cost to the city would decrease from $3.3 million a year to $1.7 million a year, even with no increase in market value.

Bailey said those numbers are from a working draft of the city’s 10-year capital improvement plan and that the city would not see those savings in the first year.

“We have $130,000 a month roughly of salaries that we’ll be responsible for for six months,” Bailey said. “Plus we’ll have some costs for different phone systems, different software that we have contracts with. So we’ll have to pay those periods out.”

Bailey said the city would see “significant savings” over the first five years after the deal is final.

Post said that despite the first-year “adjustment” period and adding in the capital improvements that Hotwire would pay for, the city would save about $20 million over 10 years.

“That is a lot of money for us to have for other needs that the city may have,” Post said.

Bailey said that if employees can’t be placed at Hotwire and have been performing “at expectation,” the city would either find them another job or give them a compensation package.

“But we hope to find them a place at the organization,” Bailey said.

Councilman Brian Miller said the lease deal is a chance for the city to “do better than what we have done.”

“We’ll have more in our pocket by doing this than we have in our pocket today and might have a chance to allocate some funds to some other needed areas as a result of this transaction,” Miller said.

Councilwoman Karen Alexander said she would vote in favor of the lease because “it is better than continuing down the road that we are presently doing.”

Alexander said the lease could save the city aobut $1 million a year and that in 11 and a half years, the Fibrant-associated debt would be paid off.

“And at that time, we will have even more (revenue) because we won’t have the debt service,” Alexander said.

“And that doesn’t mean this is not associated with risk. Any transaction that’s happened in history has always had those things,” Sheffield said. “But not doing something is the greatest risk of all. We’ve not done something for a long time.”

The next step to complete the Fibrant-Hotwire lease will include the May 8 referendum in which city voters will be asked to support or oppose the lease. Next will be refinancing the city’s debt.