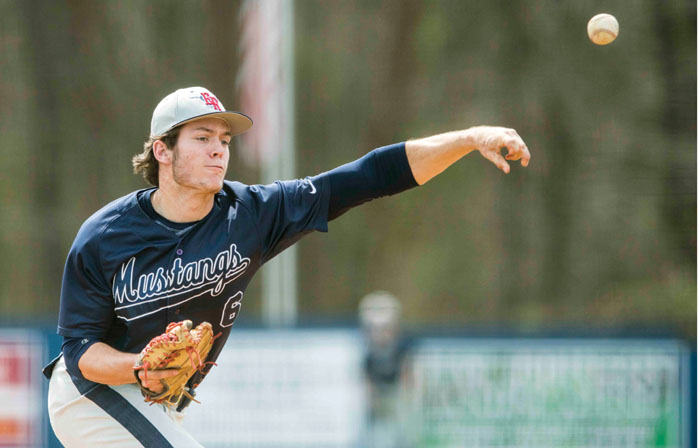 GRANITE QUARRY —Baseball is all about the timely knock, producing hits with runners in scoring position.

A lofty batting average is nice, but RBIs are still the single most meaningful number on a player’s stat sheet.

East Rowan’s muscular sophomore cleanup man Wayne Mize is an RBI waiting to happen. He has only eight hits this season, but he has 15 RBIs in just 31 at-bats. Six of his eight hits have gone for extra bases. Three left the park.

Mize produced RBIs No. 13, 14 and 15 with one lethal swing on Monday, as host East Rowan won a tournament semifinal game against Central Cabarrus, 9-4.

It looked like a dead-even game on paper, with the teams entering with identical records, but Mize and the Mustangs settled the outcome with a flurry of bunts and line drives in the bottom of the first.

“That inning set the tone,” Central coach Ron Bost. “We battled all day, but we never quite got back into it.”

Hayden Setzer flicked an opposite-field to get things started against undefeated Central starter Stephen Kutay, who is no longer undefeated.

Will Brown was  next. His back-spinning bunt made things tough on Central’s defense. Brown runs well and was safe at first by an eyelash. Charlie Klinger followed with a textbook bunt  toward third that no one had any chance to make a play on, and the Mustangs had the bases loaded with no outs for Mize.

“East did a great job of executing on those bunts,” Central coach Ron Bost said. “There really wasn’t anything we could’ve done. It was going to take a great play to get anyone out on either bunt, and we didn’t get that great play.”

Mize is a dead-red hitter, and he got  a straight fastball on the second pitch he saw from Kutay. He jumped out of his shoes. He nearly tore the cover off the ball.

“I just went up there looking for good  contact, something that maybe I could drive backside,” Mize said. “Then I got a fastball right down the middle.  I had to take advantage of it.”

Mize lashed a double that whistled off the base of the wall in left-center. It got out there in a hurry, missing a grand slam by a few feet. All three Mustangs on the bases scurried home easily.

“We had the two  perfect bunts and they put us in great position,” East coach Brian Hightower said. “And then Mize did what we wanted him to do.”

“The game wasn’t over after the first inning, but that took the pressure off,” Hightower said. “We had a cushion. We could relax a little.”

Klinger’s two-out double  against reliever Evan McGee drove home a run in the second, and it was 6-0.

But East’s defense turned in an ugly top of the third. After a hit batsman, a walk, two errors and a passed ball created two unearned runs, Central (8-5) was on the board, trailing 6-2.

East answered in the bottom half. Moss started it with his second hit. Trevor Scruggs lifted a sac fly for 7-2 and Matthew Mathis delivered a run-scoring single for 8-2.

Klinger scored on a wild pitch in the fourth to make to push the lead ot 9-2. East should’ve been able to cruise at that point, but that didd’t happen. Setzer was laboring.

“He just didn’t have his real good stuff, and we could’ve helped him more with our defense than we did,” Hightower said.

It was mostly command issues for Setzer, a Catawba commi. He missed the strike zone by a lot, at times.

After Central scored twice in the fifth against Setzer on three singles and two walks to get within 9-4, Hightower had seen enough. Setzer struck out seven, walked six and hit two. He exited with one out and the bases loaded in the fifth.

East Rowan’s touted freshman JD Basinger made his varsity debut at that point.

“It looked like Hayden lost his location some,” Mize said. “But JD came in, and he was great. He’s got a really big curveball.”

Basinger struck out the  bottom-of-the-lineup guys with  a live fastball and a darting breaking ball to get out of that fifth-inning jam he inherited.

“We had a great opportunity in that inning,” Bost said. “And we’ve been swinging the bats well. This was just one of those days when we got enough hits, but we never got that key hit. If we get that hit, we’re back in the game and maybe we can put some pressure on East.”

In other words, Central  failed to get the sort of huge hit that Mize delivered for the Mustangs. Central grounded into double plays in the first and fourth innings and still  left 10 on base.

Basinger struck out six of the 10 batters he faced and has a bright future. He earned a save because the tying run was on deck for the Vikings when he entered the game in the fifth. He finished it, preserving the win for Setzer.

Klingler had three hits to spark the Mustangs’ offense. Six different players knocked in a run.

Catcher Bryson Birmingham had three hits for Central, including a run-scoring single in the fifth.

McGee found a groove on the mound and was tough the last three innings for the Vikings. He struck out eight Mustangs and mowed down Setzer, Brown and Klingler on strikes in the sixth.