David Freeze: Nothing goes flat on the run across NC 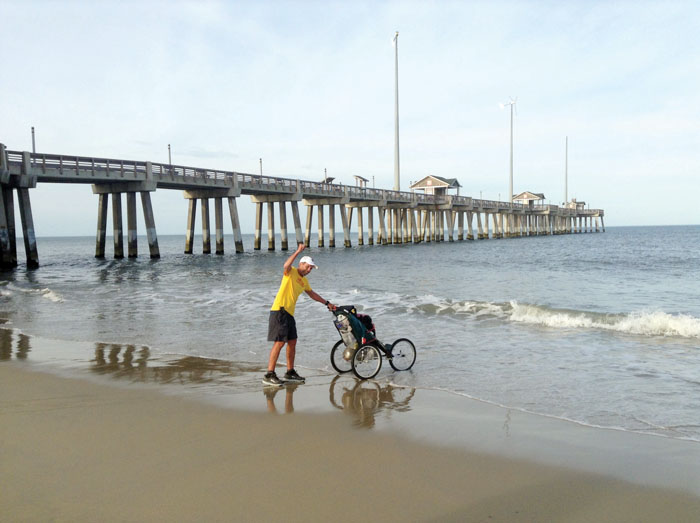 And the wheel dipping in the Atlantic makes it official -- the Murphy-to-Manteo jog by David Freeze is complete. Submitted photo

Editor’s note: Salisbury native David Freeze’s run across the state from Murphy to Manteo ended Sunday. The Post chronicled each day of his journey. Contact him at david.freeze@ctc.net.

One popular question at civic and church meetings about my bike rides is how many flats I had. It’s a good metaphor for this run itself, and I am glad to say that I didn’t have a single flat. In fact, I never had to pump up a tire. Just like the run, I got more than I expected out of the baby jogger.

Looking back, the start at the Tennessee line left me wondering what would happen. Amber and her fiance, Jamie Bishop, dropped me off on an adventure that only a small group had attempted before. Plenty of uncertainty and excitement intrigued me about experiencing our state on foot.

I remember running up that first hill and down the next and finally past the first mile. On Sunday, my mileage totaled 647. In between were bouts with all kinds of weather including a low of 16 and at least two days that topped out around 80. Rain, snow, sleet and strong winds made their presence known.

The waterfalls, the mountain vistas, dozens of little towns and finally the Atlantic Ocean. Plenty of interesting people like William Connell, the folks at the Short Stop, Sopha San from Glaze King Donuts, Jerry Womack, Tia Hooker and so many more.

It is, as I said often, really about the people, and once again I found them. The real people who don’t make the news but keep America going.

I will never forget the one day that 10 drivers stopped to see if I was OK on the way to Wilson. Natalie Newcomb stopped twice, something that has only happened on a few occasions over the years.

Plus, the law enforcement guys who made sure I was all right and several times were more concerned about the possible baby on board. There are countless stories to tell, and eventually I will get around to doing just that.

I learned that the pace of travel on my feet while pushing a baby jogger was incredibly slow but I still finished way faster than early expectations. Traveling on a bike now seems so fast and coasting down a hill seems effortless compared to contesting every single mile on foot whether uphill, downhill or flat.

Probably half the trip left me no place on the road, and travel was relegated to pushing the stroller in the grass. Of course, my nemesis rumble strips were common in certain counties.

So far, I have accounted for $8.76 in change found along the way. I probably lost some of it again, to be honest. Nearly all of this found money came in the last half of the trip. Mountain folks don’t leave much change along the way.

I was reminded by Ed Dupree’s daughter, Allison, that her dad used to brag about the change he found. I might be doing that too, and every bit will go to a church offering. Some of the coins look ancient enough to have been dropped by Civil War soldiers walking home.

Originally, I had not thought a single time about running/walking across the state. Most of you will remember that Ed Dupree mentioned it to me shortly after he received the news that his condition had worsened. Ed regretted not having done a run across the state although he did so many other similar challenges.

Once he mentioned the idea and encouraged me to do it, I couldn’t shake the thought. I began to read more and research how it could be done and who actually had done it before. I told Ed that I would do the run on the day before he died.

But I honestly believe that Ed was along the way watching out for me. I didn’t have any mishaps and only a few times did I have to tighten up to avoid a close vehicle. My legs found extra strength Sunday, something that I can only relate to Ed being close by and my daily prayers for strength. I believe that Ed is probably smiling quite a bit today.

I had to be transported twice to home and back for previous commitments, and Amber Freeze, Wayne Crowder, Tim Deal and William Deal did it just as I requested. Crystal Karriker provided the pro-style baby jogger with the bicycle wheels that made the time in the grass much better than any other solution.

Meghan Agresto arranged for plenty of people near Manteo and Jennette’s Pier to know about my journey. Honks and waves were common as I neared the coast. She also gathered some friends at the right time who met me at the pier and made sure that we had a celebratory meal Sunday night.

Meghan and I met in November at the Currituck Lighthouse that she manages.

Well, its done! Just 23 days of great challenges, scenery and extraordinary people. You may guess that I can’t wait to do something new. Early June will include participating in a long-distance running relay in Nevada and then some cycling in Nevada and Utah.

As I sign off on another great adventure, my biggest thanks goes to the Salisbury Post and the amazing readers in Rowan County and plenty of other places. Thanks for that support, the prayers, the ideas and tips, and just knowing that once again so many others were following along. From the bottom of my heart, thank you all.