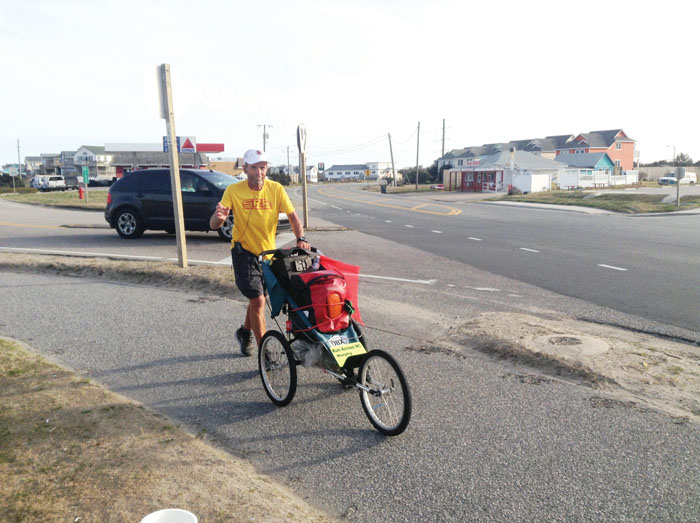 Freeze is just about to turn into Jennette's Pier at Whalebone to end the run after 43 miles on Sunday.

Editor’s note: Salisbury native David Freeze has run across the state from Murphy to Manteo. The Post chronicled each day of his journey. Contact him at david.freeze@ctc.net.

I went to bed last night in Columbia ready for the most physically challenging day of my life. I didn’t realize that it would also be one of the most emotionally fulfilling days ever. Both things happened in a big way and here is how it came about.

There was a good chance that I couldn’t finish my run/walk today by dark if I had waited until the normal time to leave. My goal was to be out by no later than 5 a.m. and I made it by a little later than 4 a.m. Concerning was the extreme distance needed and a road that I knew would be challenging, among other issues.

The weather was moderate with an early temperature of 42 and I had the good fortune of a nearly full moon and no wind. I had three packs of crackers and a small pack of peanut butter cookies, not nearly enough to cover more than 40 miles. The first two convenience stores were closed and so was the Eagle Mart, but Kathy Webb opened just a few minutes early because she could tell I was in a hurry. Two egg and cheese biscuits and few more snacks plus some water topped off my supplies. Good thing because I ate nearly everything.

Headed out of Columbia toward the east, I just hoped for the best and that none of yesterday’s mentioned bears or alligators would be interested in me. I do remember from Wyoming that I did everything wrong by buying the biscuits and carrying peanut butter products. Out west, they hang that stuff high away from people when bears are around. I did have a coyote run across the road in front of me but he kept going.

The road from Columbia went quickly down to a two-lane road with no shoulder but traffic was not an issue on Easter Sunday morning until I crossed the Lindsay Warren bridge over the Alligator River and the Intracoastal Waterway. After I crossed the bridge, there was still no shoulder and there was lots of inbound and outbound vacationers that forced me into the grass. The Wildlife Refuge was rather boring with nothing but a small snake spotted. I did make sure to eat my breakfast biscuits early and had a bag ready to toss to the bears should they arrive.

I did a lot of hymn singing this morning, some of it at the top of my lungs. It just felt right with no one around early. More than once, a few tears came but it wasn’t going to be the last time. Doubt and worry had tried to creep in overnight after hearing the guys at the Short Stop Convenience Store talk about the 800-pound bear and the alligator in the road recently killed. Early on in this journey across N.C., I heard it stated well that fear is just concern that God won’t do His job. I am positive that He will and I had secretly hoped that none of the convenience stores would be open and I could challenge myself to make it all day on the small amount of food.

As I neared Mann’s Harbor right before Manteo, I knew the the run/walk was coming to an end. My legs were dead with still about 10 miles to go to Jenette’s Pier on the Atlantic Ocean. Suddenly the most miraculous thing happened. My shin stopped hurting, surprising because I thought I may have messed it up. I kept speeding up and slowing down but always moving forward. There were two very windy bridges to cross in this area and the power came to my legs in an amazing way. After 637 miles over 23 days, the average works out to 27.7 miles a day. Today’s total of 43 miles was the biggest day overall, a fitting end.

I am sure that Ed Dupree had something to do with my leg strength returning and the shin issue going away. I even had strength to climb those bridges with the wind blowing and at one time pushed the stroller at a 10-minute mile, unheard of since the early days in western N.C. My tears came back and I pumped my arm several times and yelled, “Yes!”

Just over the second bridge, Durham Merrell of Salisbury pulled over to stop and talk. They had seen me earlier in the journey too and Durham knew from the paper that I was heading for the pier. It was great to talk to him.

Then, with less than two miles remaining, I pushed on to the pier where Meghan Agresto from Corolla was waiting for me with her sons. We had met last November when I visited her lighthouse. She had also invited other friends and I will provide more of those details tomorrow.

The popular point-to-point from west to east in N.C. is Murphy to Manteo but neither Ed or I would have been happy with that. We did the 20 miles west of Murphy from the Tennessee line and also added the four miles from Manteo on out to the pier. You will see some more details about the front tire dipping and post run celebration in Tuesday’s Post.

This has been my most challenging adventure, even though it took only 23 days of actually running and walking. I will provide some retrospect on this too tomorrow.

Thanks to Darryl Fisher, Dr. Jim Duncan and James Dunn for special contributions over the last few days! Many just simply provided prayers and once again, each of them counted.

I am going to take a special day off at the beach tomorrow in wonderful room at the historic Sea Foam and near the pier. My recap will come from here and then I will be headed back to Rowan on Tuesday. See you here again tomorrow!