David Freeze: An early day off the road to set up the home stretch 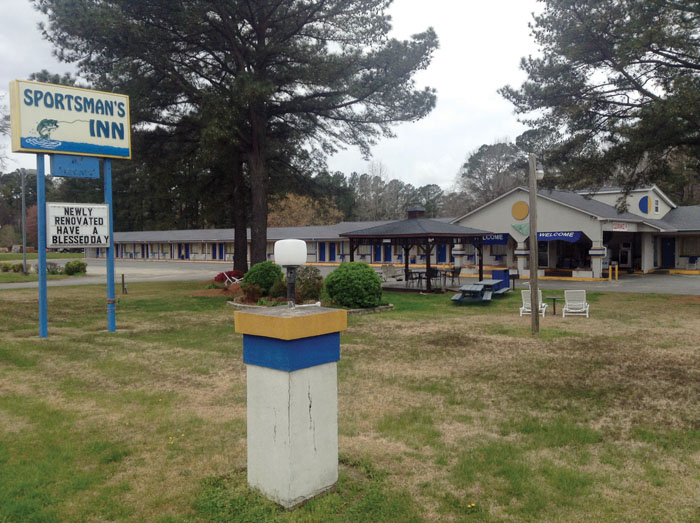 David Freeze was the first one to register for Friday night at the Sportsman's Inn. On a previous trip to Plymouth, a local person directed him here but this was the first time actually stopping in. David Freeze/for the Salisbury Post

For the first time in quite a while, I was able to get off the road before 3 p.m.

My home for Friday night was the Sportsman’s Inn in Plymouth. As I mentioned Friday, I have been to Plymouth on two previous occasions. On the Atlantic Coast bike ride, I entered town just about dark and asked about local motels. Someone told me about cheap and good and the differences. That first time, I took “cheap” because it was closest. This time, I took his “good” and am glad of it.

The motel was perfect for my needs, complete with good chairs outside to watch the traffic go by. That is where I wrote this story.

Several people have already asked about how things turned out in the Ross Motel in Williamston. As usual, I was late getting to bed and about an hour later, the smoke detector starting chirping. So I had to get up and take the battery out to stop the chirping.

The room itself was nice and I enjoyed it once the early hassle was past. I did wake the owner’s wife at 6:30 a.m. to get my $5 key deposit back. I would stay there again but ask to see the room first.

I left Williamston early with the short 23-mile distance to Plymouth on my mind. My legs and feet needed some time off the road, and they got that Friday afternoon. I planned to ice one foot and the recurring shin issue later.

There has not been a nap yet on this trip but my eyes were heavy already at 4:30 p.m.

I saw William “Dukey” Connell and his dog Saint waiting for me early along U.S. 64, so I stopped to talk. Connell asked about my journey but told me of several unusual things. He loves riding bikes but prefers the single speeds, although he has some others. Connell doesn’t like the fat tires on bikes today.

He told me about a box that was delivered about 10 years ago from Plymouth, Massachusetts, to Plymouth, North Carolina, by bicycle.

“Yep, that guy rode his bike down here, dropped off the package and camped for the night,” Connell said. “Then, he headed back the next day.”

Connell was an interesting guy. I hated to leave but already looked forward to the down time. He did make me promise to mail him a copy of today’s Post.

Traffic was light until just before Jamesville, where the logging trucks took over the highway. My road shoulder was usually good enough for only two of the three baby jogger tires, and I had to pull my elbows in when the big trucks came by. At least one got too close.

Once I entered Plymouth, the pine logging trucks turned off and the hardwood ones kept going.

At the motel, I enjoyed watching them from more than 120 feet away. I hope that the trucks mostly will be off the road for the weekend.

No rumble strips today, and I hope they stay away today on the way to Columbia.

I spent most of the day acknowledging the vehicles that pulled over to give me extra room Friday as I faced them.

The home stretch is here. A day to Columbia and a very long day to Manteo are up next. Easter Sunday should be the final full day of travel.

Interesting about that 40-plus-mile stretch from Columbia to Manteo is that it goes through a wildlife refuge with no towns or people. I will be packed up well.

Friday, the road yielded only 35 cents, partly because the shoulder was so small. That is OK; I will be looking for more today.

I hope Ed Dupree is still watching all the fun too. See you back here on Sunday morning.