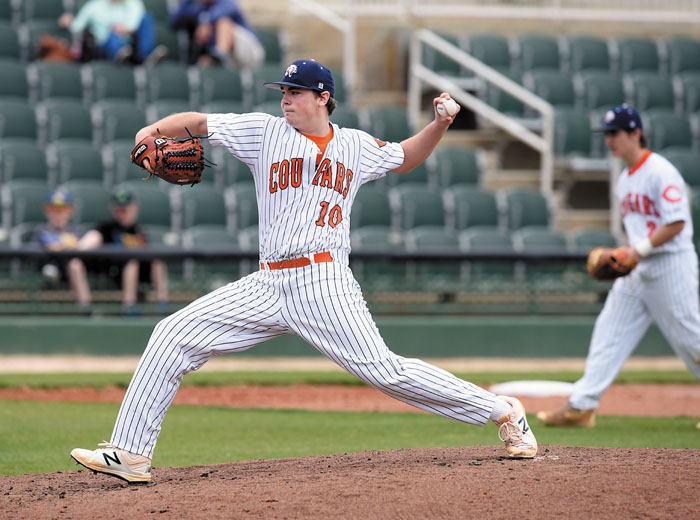 KANNAPOLIS — Most of this season, Carson’s No. 2 pitcher Maddux Holshouser has blown opponents away.

The UNC Greensboro-bound left-hander actually has even more strikeouts (49) than Carson ace Owen White (48), who may be the first North Carolina high school player chosen in this year’s MLB draft.

But Friday afternoon brought unexpected challenges for Holshouser. His fastball wasn’t as crisp as usual. His breaking ball wasn’t as sharp. And Carson’s opponent in the F&M Bank Classic was a Mount Pleasant team that can swing the bats.

Holshouser fought his way into the sixth inning before getting relief aid from Zack Starnes and keyed Carson’s 8-5 victory. He posted a season-low four strikeouts, walked three, hit a batter and allowed seven hits, but he gave the Cougars (10-3) a chance to win. That’s all a coach can ask from his starting pitcher.

“Definitely not my best stuff today,” Holshouser said. “I just had to compete and try not to let down. The good thing is we’re scoring some runs now. That really helps. There’s less pressure on the pitching staff.”

Holshouser (3-1) helped himself immensely with his glove. He fielded his position flawlessly, getting five outs himself, two on tough plays. He also got a serious assist from catcher Garrett Alewine, who blocked third strikes in the dirt and stole a borderline strikes for Holshouser with some nice framing.

“Alewine is such a good catcher,” Carson coach Chris Cauble said. “He gives our pitchers a chance to pitch. They can throw any pitch in any situation with full confidence that he can handle it.”

The Cougars delivered clutch hits. Logan Rogers, a sophomore who plays first base whenever Holshouser pitches, entered the game with one RBI for the season but he left it with four. Leadoff man Brycen Holshouser had a triple that plated two critical insurance runs. Cameron Prugh slapped three singles. All nine spots in the lineup got on base in a non-stop struggle against Mount Pleasant hurler Grayson Huneycutt, who had whipped Carson 8-2, back on Feb. 28, opening night.

“Huneycutt is one of the best pitchers around,” Cauble said. “But our approaches against him today were a lot better. I knew we couldn’t get too many runs today. Mount Pleasant keeps scrapping offensively right to the end.”

Prugh’s first single helped Carson get started in the top of the first. Rogers drew a patient, bases-loaded walk for the game’s first run, and a two-out error allowed the Cougars to stake Holshouser to a 2-0 lead.

Leading 2-1 in the third, Carson stretched its lead  with a three-run frame. Luke Barringer ripped a single to left between walks to White and Holshouser to load the bases with none out. Rogers was next. He drove a double to right-center to score two runs. It was the game’s biggest swing.

“I’ve had a little trouble in those situations this year,” Rogers said. “But I knew we needed a hit, and I focused up. I worked it to a full count and I got a pitch to hit. As soon as I hit that ball, I knew it was going to get between the outfielders.”

Carson could’ve settled things in the third but made two outs on the bases. Alewine was able to boost the lead to 5-1 when he looped a two-out single.

The bottom of the fourth could have been disastrous for Carson, as Holshouser walked the first two. Then he had to make a nice play to get the out at first on Kody Thomas’ bunt toward the third-base line. Holshouser limited the damage to one run on a groundout that White backhanded at shortstop, and the Cougars led, 5-2.

Chance Daquila’s two-out RBI single in the fifth sliced Carson’s lead to 5-3, and the 2A Tigers (8-5) had some momentum.

In the Carson sixth, after Mount Pleasant turned to its bullpen, Cole Hales walked and Clayton Gilmore beat out an infield hit. That set the table for Holshouser’s booming, two-run triple that got over the center fielder’s head. That pushed the lead to 7-3.Then Prugh came through again. His single made it 8-3.

Those sixth-inning runs proved necessary as Thomas led off the bottom of the sixth with a double, and a tiring Holshouser quickly found himself in another jam. With Carson’s lead at 8-4,  the bases loaded and the tying run at the plate, Cauble called on senior fireman Zack Starnes.

“We’ve used him in tough situations like that all year,” Cauble said. “He can come in and throw strikes, and strikes are what we needed.”

It took Starnes a while to settle in. Hayden Radford drew a walk to cut Carson’s lead to 8-5, but with the pressure mounting, Starnes got cleanup man Daquila to loft a routine flyball to Brycen Holshouser in center field.

Mount Pleasant got another hit from Thomas, his third, with one out in the seventh, but Starnes broke off a paralyzing, strike-three curveball for the second out.

“I really wasn’t that nervous,” Starnes said. “I had confidence. I throw mostly fastballs, but on that strikeout, that was the best curve I’ve thrown all year.”

One routine fly ball later, Starnes owned his first save of the season and Carson moved on to a 4 p.m. semifinal matchup today against Robinson.

Carson started out 1-3 but has won nine in a row. A preseason No. 1 in 3A, the Cougars are starting to look as good as advertised.

“When this season started, we not only weren’t hitting at all, we weren’t playing very good defense,” Cauble said. “But nobody panicked. We’ve pitched it great all year, and now we’re picking it up with the gloves and with the bats.”

NOTES: White pitched Thursday. Carson may send Prugh (0.00 ERA) to the mound today. Carson already has shut out Robinson twice this season, although one of those games went 13 innings … Every win for Cauble adds to his record as Rowan’s winningest high school coach. Friday’s victory was No. 338. He’s won 202 at Carson after logging 136 wins at West Rowan. … The only Carson error was a tough one. Prugh, playing second base, took a one-hop rocket off his body.