David Freeze: Just one day at a time 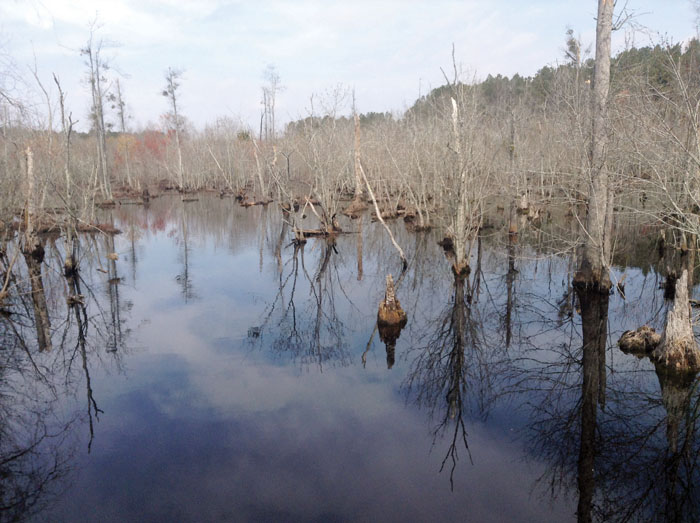 Some evenings I go to bed sore, stiff and less excited for the next day. Usually, this happens way past the time that I need to be in bed. Then, when the early alarm goes off, things change.

I woke up excited and ready to hit the road on what was forecast as a beautiful day. My main worry was the rumble strips that could make using the road shoulders really hard, but it wouldn’t be harder than I had seen already.

My night at the Budget Inn in Tarboro was very good, especially with the Waffle House across the street. Waffles and an omelet provide a lot of energy. I made sure to rehydrate after running low on water again.

Well before sunrise, the baby jogger and I headed east on U.S. 64, just a short stone’s throw from the motel. I had plenty of water and snacks this time.

Traffic was light as the sky brightened with the temperatures already in the 50s. After less than a mile, the rumble strips didn’t leave but the shoulder widened to interstate width. I was ecstatic but cautious that they could change back.

The wide shoulder remained for the rest of the day. I didn’t pass close enough to other towns and ended up covering 32 miles to Williamston.

The only conversation of the morning was with Danny Jones of Goldsboro, who was filling a piece of landscaping equipment with fuel. Jones said his crew was working to plant a few of the hillsides next to interchanges that crossed U.S. 64. They had just put down fabric that would be covered with large stones to help with erosion.

My exit was 214 as I headed into Williamston to find the Ross Motel. Right away, I found a wallet along the road and picked it up. Planning to take it with me to the motel, I saw a sheriff’s car but no one was with it. I kept going and planned to call the Police Department as soon as I was checked in.

My welcome at the motel was quite unusual. The desk clerk seemed incredibly slow and asked for $5 in cash for a key deposit. I finally got the key and went to my room.

The room was OK but there was not a chair in it, nor was there a remote control. I went back and asked for both. The owner came to the desk and told me that there is no chair in the nonsmoking rooms.

The desk clerk told me that he was sorry but there was no remote with this room. I asked about changing rooms, and he said I couldn’t do that. This was really starting to get weird, and I began to think that I might have two reasons to call the Williamston PD. I asked if they could get a remote out of another room and again was told no.

The owner’s son came out then and gave me a remote, and the owner walked back to my room and verified the missing chair before getting one. Finally, the desk clerk told me that this was just his second day and he didn’t know what to do. Then he became interested in my trip, probably just to smooth things over.

I went to the Dairy Queen right away and got my first pineapple milkshake of this adventure and came back to call the Police Department about the wallet. The officer picked it up right away and that ended the strange happenings of the afternoon.

It is on to Plymouth today, the shortest distance planned for any remaining day. I visited Plymouth on my Atlantic Coast and Outer Banks bike rides and had a pleasant experience both times in the historic town. Civil War history and the Roanoke River dominated my interest before.

Williamston has some significant history in the civil rights movement as did Elm City on Wednesday. Both towns are small but garnered national attention. Famous baseball pitcher brothers Gaylord and Jim Perry are from Williamston. Gaylord was a reputed spitball specialist.

Williamston is also on the Roanoke River.

With only 85 cents in found money Thursday, I am certainly not getting rich.

Rodney Phillips of the sponsoring China Grove First Baptist Men on Missions has asked that I donate the found money to the offering plate. I plan to do that.

With just a few days of travel remaining, the Outer Banks are getting close. See you back tomorrow as I head to Plymouth with rain in the forecast.