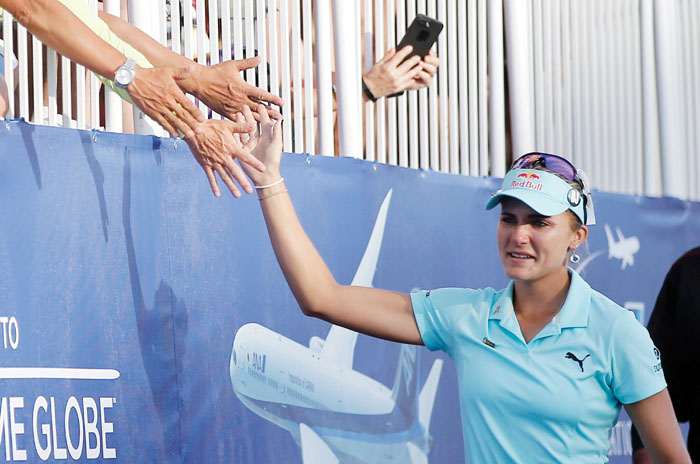 FILE - In this April 2, 2017, file photo, Lexi Thompson high-five fans as she walks to the 18th green during the final round of the LPGA Tour's ANA Inspiration golf tournament at Mission Hills Country Club in Rancho Mirage, Calif. Thompson still has occasional nightmares about the ANA Inspiration a year after a rules violation cost her four strokes in an eventual playoff loss. Now back, she's set to open play with Michelle Wie on Thursday at Mission Hills in the first major championship of the season. (AP Photo/Alex Gallardo, File)

“I’ve relived it for a while,” said Thompson, set to open play Thursday at Mission Hills in the first major championship of the season.

Thompson was penalized four shots with six holes to play in regulation because of a rules violation the day before, wiping out her three-stroke lead. Playing through tears and feeding off the supportive fans, she rallied to force a playoff that So Yeon Ryu won on the first hole.

She had a 15-inch par putt on the 17th hole in the third round when she stooped to mark the ball, and then quickly replaced it about an inch away. A television viewer contacted the LPGA Tour the next day, and officials determined it was a clear violation.

Thompson was penalized two shots for improperly replacing her ball and two shots for signing an incorrect scorecard, even though she didn’t know her third-round score was incorrect when she signed the card.

Under changes made soon after the tournament, players can avoid a penalty if the violation couldn’t be noticed with the naked eye, and if officials deem players made a “reasonable judgment” in taking a drop or replacing a ball. The LPGA Tour adopted a local rule to get rid of the “wrong scorecard penalty,” and that will become a rule throughout golf on Jan. 1.

“I’m just happy that the rule changed so nobody else can be put through what I was put through last year,” Thompson said

She rebounded from the ANA loss to win two starts later at Kingsmill.

“I knew whatever I was challenged with, I could get through it,” Thompson said.

Thompson also won in Indianapolis, and took the $1 million bonus for the Race to the CME Globe and the Vare Trophy for lowest scoring average — all while coping with her mother’s successful fight with cancer and her grandmother’s death.

“I learned how strong I was as a person on and off the course,” Thompson said.

The second-ranked Thompson has played four events this year, tying for sixth in the Bahamas, second in Thailand, 31st in Singapore and 54th last week in Carlsbad.

“Two good, two bad, but I feel very good about where my game’s at,” Thompson said. “I feel solid, and I absolutely love this golf course. I get to hit a lot of drivers.”

Thompson will play alongside Michelle Wie the first two rounds. Thompson overwhelmed Wie in the final round of her 2014 victory.

“I didn’t have the best memories last year, but it’s just an amazing atmosphere this whole event,” Thompson said. “There is so much history behind this event. It’s an honor just to be playing in it and have my name on the trophy is a huge honor.”

Wie won four weeks ago in Singapore for her first victory since the 2014 U.S. Women’s Open.

“Mission Hills is a truly special place in my heart,” Wie said. “I still remember when I was first playing here and all the memories that I had from that.”

The 28-year-old Wie had her appendix removed last summer after being stricken before the final round of the Canadian Women’s Open. She has recently fought arthritis in her hands.

“My main focus is staying healthy and we’ll just take it on from there,” Wie said

Brittany Lincicome won at Mission Hills in 2009 and 2015. She took the opener in the Bahamas.

“This is a long-hitter’s golf course, which is great, but I need to keep it on the fairway,” Lincicome said. “The greens are firm and fast, which is awesome. The course is in great shape which it always is. Just driving in with the snow on the mountains and how beautiful the flowers are and everything, this week just puts a smile on my face.”

DIVOTS: Stacy Lewis is returning from a rib injury sustained while practicing before the Thailand event. She won the 2011 title and lost a playoff to Lincicome in 2015. … Fourteen-year-old Rose Zhang of Irvine won the ANA Junior Inspiration on Sunday to get the final amateur spot in the field. U.S. Amateur champion Sophia Schubert also is in the field along with fellow amateurs Lucy Li, Albane Valenzuela, Lilia Vu, Maria Fassi and Atthaya Thitikul.