Grandson charged in the murder of his 62-year-old grandmother 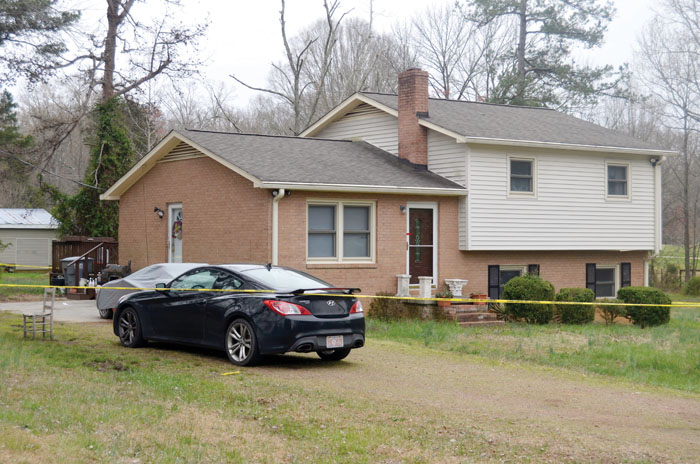 Rowan County Sheriff's detectives are investigating the murder of 62-year-old Melanie Anita Clark, who lived at this Dulin Avenue, located in the southeastern part of the county, just off Mount Hope Church Road. Shavonne Walker/Salisbury Post

SALISBURY — A Davie County man was charged Tuesday with first-degree murder in the death of his grandmother, whose body was found just hours before his arrest in her Dulin Avenue home.

She at first was believed to have died from cardiac arrest.

Rowan County officials said Melanie Clark was not conscious and not breathing. Authorities said they had responded to a medical call. A short time later, officials confirmed that Clark was dead.

Tuesday morning, crime-scene tape lined the perimeter of the house, which sits at the end of a dead-end road just off Mount Hope Church Road in the southeastern part of the county. The victim’s two vehicles were parked in the driveway.

Authorities said the last time Melanie Clark was seen alive was Saturday. Officials said family members were unable to contact her Saturday and she did not show up for church Sunday morning.

Family members entered the home through an unlocked door, where they discovered her body, officials said.

Neighbor Quinncy Moss was a childhood friend of Joshua Clark. Moss said Clark had gotten into “some trouble” when he was a kid.

“The last time I talked to him, he said he’d learned from his mistakes and paid his debt to society,” Moss said.

Moss said he met Melanie Clark only a few times but described her as a “real sweet lady.”

Moss said he is thinking and praying for the family.

Patricia Blevins, who has lived on Dulin Street for 10 years, said she didn’t know Melanie Clark very well. She said Clark pretty much stayed to herself.

Blevins, who works at the Hefner VA Medical Center, said her husband sent her a text message to tell her what happened just yards from their home.

“I was pretty shocked,” she said.

Blevins said knowing that something like that happened in her neighborhood made her a little leery when she arrived home from work.

On Nov. 8, 2014, Joshua Clark and three others were charged with breaking into a vacant East Cemetery Street home. Police said Clark approached them to say he’d been “jumped” by a group of people and accused of talking to the girlfriend of another man. Police noted in that incident that Clark had no visible injuries.

During that same weekend, authorities charged Clark and a woman after they were found asleep in a stolen pickup. They also were charged with stealing construction and lawn equipment from a van parked at the Rowan Helping Ministries shelter.

In March 2014, Clark was convicted of felony possession of a firearm by a felon, felony breaking and entering and felony obtaining property by false pretenses after a 2013 incident in Rowan County.

Clark remains in the Rowan County Detention Center without bond. He is expected to make a first court appearance this morning.

This is the second murder of the year in Rowan County. The first was in February at a Gheen Road home. The suspect in that case turned himself in a day later.