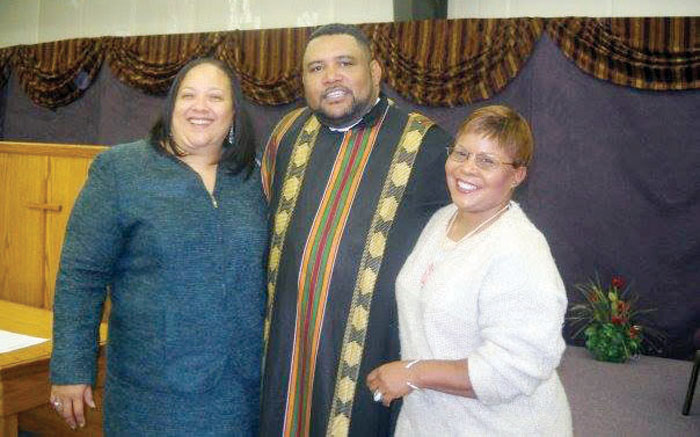 Melanie Anita Clark, right, is shown with members of her church, Progressive Outreach Ministry, in Salisbury where she had been a fixture since 2005. She was killed by her grandson, Joshua Dimitri Clark, 25. He remains in the county jail without bond. Submitted photo

SALISBURY — In February 2010, Joshua Dimitri Clark — then 17 years old — was charged with stealing a bank debit card from his grandmother. Today, he sits in the Rowan County jail, charged with her murder.

Melanie Anita Clark, 62, a longtime Freightliner employee and a regular in attendance at Progressive Outreach Ministry, is being remembered as a kind and caring woman.

“She was a good soul. It wasn’t anything she wouldn’t do for anybody,” Sheila Mills, co-pastor of Progressive Outreach Ministry, said Wednesday.

She said Clark raised Joshua and another grandson, Kevin. Despite the problems she faced with Joshua, no one would ever have known, Mills said.

“She always, always had a smile. You would never know she was dealing with anything,” Mills said.

Mills first met Clark when they both worked at Freightliner. Mills left her job, but Clark stayed on and was looking forward to retirement, friends say.

“We are extremely devastated. It’s been challenging. Her presence will be missed,” Mills said.

Clark was a member of the pastor’s aid and usher ministries at the church, which she had attended since 2005.

A celebration of life service will be held at 5:30 p.m. today for Melanie Clark at Progressive Outreach Ministry, 600 N. Long St.

Jeff Hicks, who worked with Clark for more than 20 years, says the entire Freightliner family is hurt by her death.

“She was just a down-to-earth person,” Hicks said.

He said she raised her grandson Josh like he was her own son. Hicks said Clark was a seamstress and jewelry designer. He said sewing and designing jewelry were what she most looked forward to upon retirement.

“She was like having a best friend and mother in one,” she said.

Grilliot said Clark will be missed and was loved by her work family.

“She had a love for God, her brothers and sisters, her daughter and her grandsons. She had a heart of gold,” Grilliot said.

“Her smile would like up a room, and she never met a stranger. It gives me peace knowing she is in heaven with our heavenly father and, of course, her mother that she spoke of often,” Grilliot said.

He also qualifies for representation from the capital defender’s indigent defense program. No attorney was selected for that role.

Clark was charged with first-degree murder and felony robbery with a dangerous weapon.

Emergency and fire personnel were called at 11:18 p.m. Monday to Melanie Clark’s home at 345 Dulin Ave., where it was believed she’d was in cardiac arrest.

Joshua Clark was arrested Tuesday evening. Warrants say he stole her Wells Fargo bank card and threatened her with a 9mm handgun.

Arrest warrants show that on Feb. 21, 2010, Joshua Clark, then 17 and living with his grandmother, was arrested after he took her Wachovia bank card and used it to make online purchases. He bought items from Eastbay, a company that sells athletic apparel and sports equipment. He was convicted of forgery, financial card fraud and other offenses that same year.

On Oct. 13, 2010, Joshua Clark was accused of stealing two televisions from his grandmother. On Aug. 11, 2013, an arrest warrant says Clark stole an iPad, television and a 20 gauge shotgun from her. The warrants said at the time that Clark, then 21, lived on Daughtery Road in China Grove.

Clark has a number of previous convictions including breaking and entering, felony larceny, possession of a firearm by a felon, and obtaining property by false pretenses.

Clark is expected in court April 18 for a probable cause hearing.