David Freeze: An easy traffic day leads to an evening in Tarboro 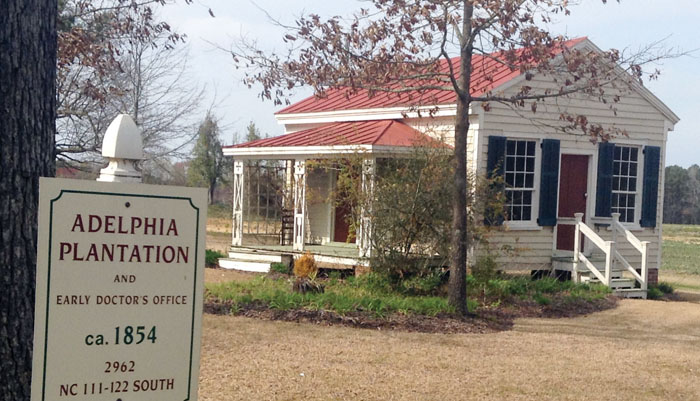 This plantation doctor's office, circa 1854, was seen by Freeze from NC 111 Wednesday afternoon. David Freeze/for the Salisbury Post

For the past several days, I have seen thousands of cars racing by. The sound of cars and plenty of trucks at high speed all day is something that I don’t like. Either on the bike or on foot, the sound is so overwhelming that it makes silence so good later when I finally get it.

Wednesday was one of my favorite days of the journey just for this reason. Traffic never was lighter.

My night in Wilson at the Microtel was just OK, partly because of the late arrival and my inability to turn my mind off when I did get in bed. I was excited about the predicted warmer temperatures and wearing shorts all day and the long run/walk ahead.

My route for Wednesday was on country roads on the way to Tarboro to rejoin U.S. 64, and much of it seemed similar to a segment of North Dakota. Traffic was light as I left Wilson and headed north and east.

The first and only town with convenience stores for the day was Elm City. I stopped and talked to Kester Mitchell about his cycling and walking in the area and about healthy eating. He told me a little bit about the town and verified my route to Tarboro as a good one.

I should have bought more water at one of Elm City’s convenience stores but didn’t realize there would be no more for 20 miles.

Between Elm City and Tarboro was lots of crop land, but not much was happening other than some lime spreading. Cars were so infrequent that on occasion I stopped looking for them.

I did see James Mullins out painting fence rails, and I think we were both led to start a conversation. I can’t remember who started but we had the best time talking about my trip, Salisbury and the road to Tarboro.

James introduced his wife, Beatrice, who was also working in the yard. They are from Pinetops, although there was no town close to their house.

On the way to Tarboro, I saw several stately historic homes and a restored 1854 plantation doctor’s office.

Traffic remained fairly light even as I neared and entered Tarboro. I got water and a meal at the Waffle House even before getting a room at the Budget Inn. This one was really nice and was right next to U.S. 64 with its rumble strips.

After 33 long miles Wednesday, I will head for Williamston today. The rumble strips will slow things but I have to do it. Towns are few, and it looks like U.S. 64 remains four-lane to Williamston and then drops to two briefly before going back to four at Plymouth.

The temperature reached the low 70s Wednesday with a nice tailwind and should get even warmer today.

The total distance so far for the trip over 19 days is 517 miles. I think there are about 122 remaining.

I have thoughts of some ice cream. It is finally warm enough. I could spend the dime I found on the road.

See you back here tomorrow!