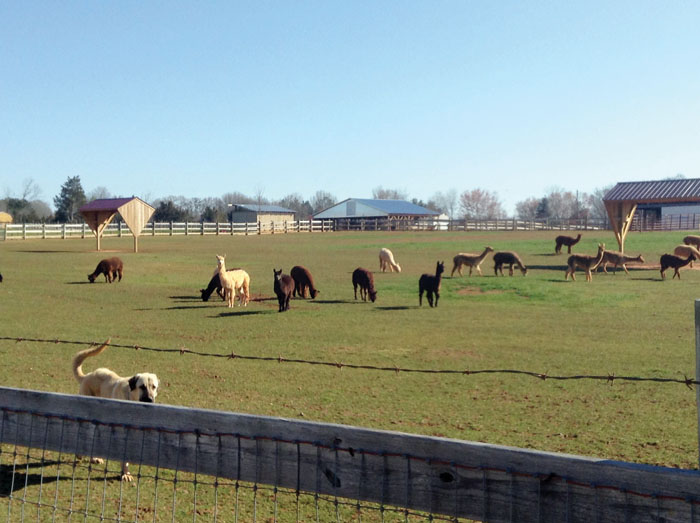 This alpaca farm was about the only highlight of a slow Friday morning. David Freeze/for the Salisbury Post

My alarm is now set earlier to take advantage of more daylight. The 5:45 alarm Friday came with a 26-degree temperature. I was not worried because I had a sidewalk and plenty of warm clothes after a good night’s sleep at Siler City Motor Lodge.

That good sidewalk took me almost all of the way through Siler City as the morning sky brightened. I had no trouble getting out of town and headed east into plenty of traffic but with good shoulders.

The last stores passed by and I thought that more would be scattered along the way toward Cary. Not so! Not a single convenience store for more than 20 miles as U.S. 64 became another kind of road. The dreaded rumble strips returned, and cables kept anyone from crossing the median. Only a few roads turned off, and there were no real signs of life.

I crossed to face traffic, hoping for a few minutes here and there to run the baby jogger in the road.

The only highlights of a slow morning were an alpaca farm that had dogs guarding the animals and the biggest logging operation that I had seen.

Slowly the morning became afternoon, then suddenly the road changed back to normal with some good things happening.

The rumble strips left, which lifted my spirits quickly. Then a group of cyclists started to pass me slowly. One of them read my Murphy-to-Manteo sign and came back to ride beside me.

Craig Mangum, an emergency room doctor at Wake Medical Center, wanted to know about my journey and told me a little about himself. Clearly into fitness, he had been an ER doctor for eight years and was headed to meet with his son’s scouts later in the afternoon. Mangum broke the slow spell, and I really enjoyed meeting him.

Then, almost immediately, Jerry Womack and Carol Vaughn stopped by. They live near Cary and had some interesting plans. Jerry, formerly of Spencer, had been following my story and grabbed Carol to come out and meet me. Maybe the best yet is that they plan to drive to Manteo soon and follow my route all the way back to the Tennessee line.

Jerry plans to stop by the Post and collect as many of the printed editions as he can to recapture the trip.

Just a couple of miles later, I passed by the beautiful Jordan Lake. The lake looked inviting even in the cold afternoon with several fishermen and at least one craft that looked like a small sailboat.

Road construction left only one open lane in the area, leaving me the other lane to myself.

As the day drew to an end after 28 miles, Tim and William Deal picked me up for the ride back home. Tim had offered several weeks ago, and it was perfect timing. At still about 20 miles west of Cary, I will pick up there on Monday morning. With a couple of big commitments on Saturday, this will be my last trip home until the adventure is complete.

One important requirement is a new pair of shoes. Ralph Baker Shoes and Altra are donating a new pair of Altra Paradigm after the previous pair has been my shoe of choice since Day 3. I will wear them until and after I reach Janette’s Pier near Manteo.

I have been mentioning how much change I find on the road and was glad to pick up another worn quarter today. Allison Dupree reports that Ed used to do the same and we are pretty sure that he is watching as I collect the left-behind coins.

The final third of my cross-state run/walk adventure should take about 10 days. First up is to pass through Cary, Raleigh and Rocky Mount, much of it on Monday.