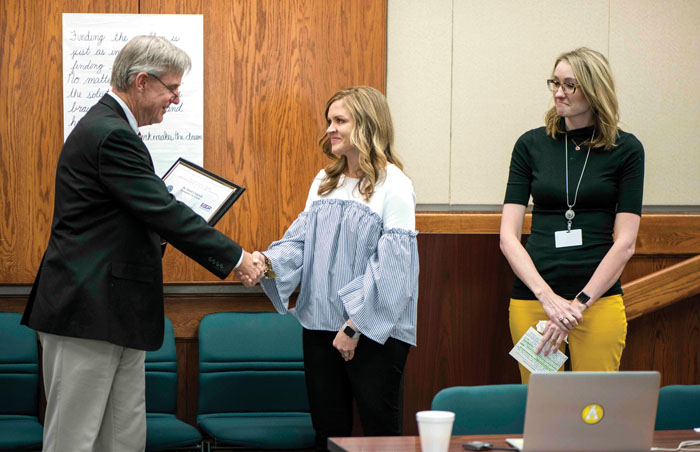 KANNAPOLIS — When her husband was deployed to Southwest Asia in October, Lyndsey Pelusi thought she knew what to expect.

Matthew Pelusi, an Army captain, had been deployed once before, five years ago.

But this time, things were different. Lyndsey Pelusi now held a more demanding job as an assistant principal at Fred L. Wilson Elementary School in Kannapolis. And she had recently given birth to a daughter, Charlotte.

“This is an emotional time,” she said. “Home alone while your spouse is on the front lines.”

As the months stretched on, Pelusi found a friend and strong supporter in the school principal, Mandi Campbell. When Pelusi needed to leave school for doctors’ appointments, Campbell understood. When she needed a night off and some time to herself, Campbell stepped in and agreed to baby-sit.

On Thursday, Pelusi wanted to return Campbell’s kindness. That’s why she decided to nominate her for the Spouse Patriot Award, an award given by the Employers Support of the Guards and Reserve Division of the U.S. government to support supervisors of spouses of active military personnel.

Soldiers and reserves are protected from job discrimination under the law, said Kevin Spalding, area chairman of the division. But those laws do not extend to their spouses.

“So spouses have no protection under the law,” he said.

The Spouse Patriot Award was created to laud employers who go above and beyond to work with military spouses who are often going through a difficult time during a tour of duty.

“We go over and above to try to recognize that,” Spalding said. “… Any support that’s given is greatly appreciated.”

On Thursday, Pelusi, along with two other educators at Wilson Elementary who have spouses on active duty, surprised Campbell with the award at a principals meeting. With tears in her eyes, Pelusi told Campbell how much her support has meant. Matthew Pelusi took part in the meeting by video and chimed in his thanks.

Matthew will return from his tour of duty in the fall

Afterwards, Lyndsey Pelusi said she wanted Campbell to get her accolades.

“This award is a pretty big deal,” she said. “Her name is going on a list. Everyone is going to know what she’s done.”

Spalding said that supervisors like Campbell allow military men and women to do their jobs effectively, knowing that someone is looking out for their families at home.

“Everybody plays a part,” Spalding said. “If you will, we’re all serving.”

Campbell said she was surprised by the award, adding that she would do the same for any of her staff members.

She said there is a lesson everyone could learn from this story.

“I think it’s important for everyone to realize that everyone is going through something,” she said.

For the two educators, this experience has only strengthened their bond.

“She deserves the world and more, but this is what I could do,” Pelusi said.