David Freeze: Snow and cold, but another enjoyable day 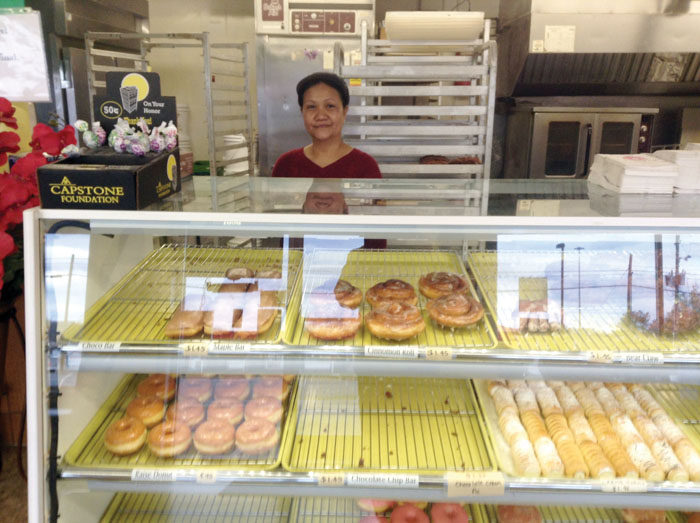 Sopha San serves up doughnuts at Glaze King Donuts, less than a half mile before Motel 6 in Asheboro. David Freeze/for the Salisbury Post

The forecast for a few flurries in the Lexington area ended with four hours of heavy snow Wednesday but thankfully little accumulation. I looked outside at 6 a.m. and nothing was happening. But by 7 a.m., snow began to fall.

Just daylight enough at 7:30 a.m., I hit the road. U.S. 64 joins with business Interstate 85 for several miles, and I fully expected to see flashing blue lights. None came, even as I raced the baby jogger through a single lane with the other closed for construction.

It was easily the fastest that the baby jogger has traveled on this journey.

Starting on the south side of Lexington, U.S. 64 had excellent shoulders, and the traffic didn’t get near me for about the first 10 miles. Two people stopped to offer rides, one of whom totally stopped in the four-lane road and ran back to me. I told him, “I’m fine, I want to do this!”

He was a really nice guy, and I asked to make his picture for my newspaper story. His reply was, “No pictures,” and then he hopped in his SUV and drove away.

The other person who stopped during the snow was a woman in a big pickup. I explained myself, and she seemed genuinely disappointed.

About 10 miles out of town, the rumble strips came back and left no room for the baby jogger. This means I have to walk and find ways to push it, sometimes in the wet grass. Traffic was just light enough that I could get all the way in the car lane often.

Once I entered Randolph County, the rumble strips remained but the pavement widened enough for the baby jogger’s three wheels most of the time. The snow stopped and light rain started, and eventually it warmed up a little bit too.

About 3 p.m., a cold wind pushed from behind me and sleet started to fall. I put my heavy mittens back on. Since Asheboro is in Randolph County, the good shoulders continued all the way into town.

Just before Asheboro, I got another visit from a deputy sheriff. This one was a woman and her only concern was my welfare. She stopped just long enough to make sure and when I explained my goal of the Outer Banks, she smiled, then laughed and drove away.

It looks like U.S. 64 is going to be four-lane soon while entering Asheboro from the north. I used the new road myself with no one else on it.

Upon entering town, I asked David at the Exxon convenience store for a recommendation on motels close by. He sent me to the Motel 6, brand new and very nice, plus it had the right price.

On the way to the Motel 6, I stopped at a great little doughnut shop called Glaze King Donuts and got three specialty items from Sopha San. She was hesitant to have her picture made, but I assured her she looked great for my newspaper story. I might hit her up again this morning. The prices were fantastic.

The last six miles into Asheboro were very hilly. It is part of the Uwharrie Mountains and the Uwharrie River runs nearby. Several distant views made me think of the Brevard and Franklin areas again.

After another cold and damp 30 miles Wednesday, I will head for Siler City today and then on toward Cary on Friday. Salisbury police Lt. Patrick Smith checked out U.S. 64 through Cary and Raleigh and pronounced it OK after a conversation with a Cary officer.

Add Rocky Mount to the mix and once east of these cities, I will be heading for the Outer Banks.

My legs are tired and the heat is on full blast, so Wednesday looked to be another night to turn in early. Join me again tomorrow, hopefully from Siler City and the home of Aunt Bee.