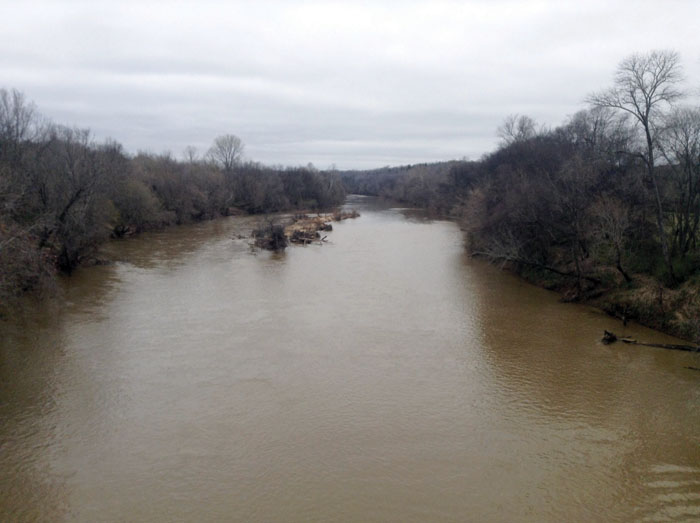 I was itching to get back on the road Tuesday and had a plan to make it happen.

First up was the final meeting of a research group that I was involved in at the Appalachian State University Human Performance Lab in Kannapolis. That responsibility was completed by 7:30 a.m., and I raced back home to load up the baby jogger.

My neighbor Ollie McKnight took me to the corner of N.C. 801 and U.S. 70, the exact spot where I turned for home on Saturday. The baby jogger and I headed east on U.S. 70 about 8:20 a.m., and with that, the adventure was back underway.

My time on U.S. 70 and then on N.C. 801 went well, largely because there was light traffic and an occasional road shoulder. My only stop in the morning was at the corner of 801 and 601 for a convenience store. I had a brief conversation with the clerk there before continuing on.

I reached the intersection of U.S. 64 near Mocksville and headed east. The traffic was heavy, and rumble strips kept me on the wet dirt and grass for much of the next 10 miles. By that time, the cold wind had intensified, and those last 5 miles were very challenging.

The only highlights were watching a pulpwood operation working and crossing the Yadkin River and the Daniel Boone Canoe Trail.

Thanks to everyone who had an opinion on how to connect back to U.S. 64. I chose this route because it looked to be the best mix for traffic and accessibility to a motel. I stayed in the Budget Inn in Lexington, and it was the first time that I had been warm all afternoon.

Early reviews are just OK, but I didn’t pay much and it was only a quarter mile off the route.

The only highlight of the afternoon was my stop at a Subway shop, the first of the trip. I got my sandwich and some cookies and asked for a large water. I was told the owner charges $2.50 for a large cup, no matter what you put in it. That was a first for me after stops at Subways all across the country.

The clerk ended up giving me the cup, as she should have.

One of my main reasons to be home this past weekend was the scheduled meeting of the city’s special events permitting committee. Brian Miller and David Post did a great job with this and again have it ready to present to the City Council after more than a year’s worth of meetings. They worked out a good compromise that should benefit special events in the city.

My goal for Wednesday is Asheboro. Hopefully, the worsening weather forecast won’t play a big part. U.S. 64 is still the route and will remain so the rest of the way to the Outer Banks although the portion through Cary and Raleigh looks loaded with traffic.

After 30 miles Tuesday, I was ready to get off the road. But just an hour later, I was warm and excited about heading out today. Hopefully, there will be some good conversations and scenery too. I am not very familiar with what I will see on the way to Asheboro so it will be mostly new.

I think that sometime Wednesday afternoon, we will pass the halfway point for the journey.

Thanks to sponsors Dick and Jean Richards, Gear for Races, and Vac and Dash, along with the Men on Missions of China Grove’s First Baptist Church.

See you back here tomorrow, hopefully with no more snow and less wind.