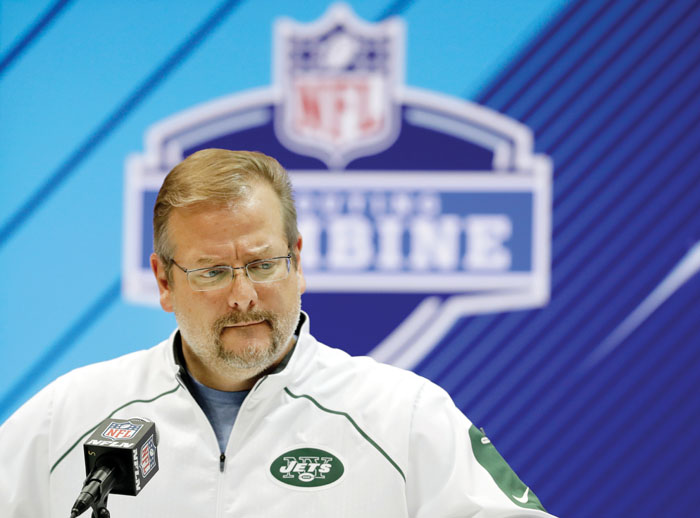 FILE - In this Feb. 28, 2018, file photo, New York Jets general manager Mike Maccagnan speaks during a press conference at the NFL football scouting combine in Indianapolis. The Jets have acquired the No. 3 overall pick in the NFL draft from the Indianapolis Colts on Saturday, March 17, 2018,, moving up three spots in a sign that they intend to get one of the top quarterbacks available. The Jets are sending the Colts their first-rounder, No. 6 overall ,along with two second-rounders this year and a second-rounder next year to complete the massive deal. (AP Photo/Darron Cummings, File(

NEW YORK (AP) — The New York Jets shook up the NFL draft on Saturday by soaring three spots to No. 3 overall in a stunning swap with the Indianapolis Colts.

The Jets acquired the third pick in a strong sign that they intend to get one of the top quarterbacks available. They sent the Colts their first-rounder — No. 6 overall — along with two second-rounders this year and a second-rounder next year to complete the massive deal.

Colts general manager Chris Ballard said the teams had been discussing a potential trade since early in the week.

“They had an interest to move up to (No.) 3 and kind of went back and forth for the last four or five days,” Ballard said in a video posted on the Colts’ website. “Talked to a couple other teams, but we still wanted to stay in position in that top 10 where we could still get a premium player. We feel like at (No.) 6, we’ll still be able to get a premium player.”

After losing out to Minnesota in the Kirk Cousins sweepstakes at the start of free agency, New York re-signed veteran Josh McCown and agreed to terms with Teddy Bridgewater, both on one-year deals. But it was believed the Jets would still focus on finding a quarterback of the future with their first-round pick in next month’s draft.

By moving up to No. 3, New York assures itself of getting one of the top-rated quarterbacks available. USC’s Sam Darnold, UCLA’s Josh Rosen, Wyoming’s Josh Allen and Oklahoma’s Baker Mayfield are all considered potential top-five selections.

General manager Mike Maccagnan has been zeroing in on the QBs up close, attending the pro days of both Mayfield and Rosen. He also plans to attend the pro days for Darnold and Allen.

The versatile running back announced his retirement from playing in a humble and heartfelt post on Instagram early Saturday.

“10 years!” Woodhead wrote. “Wow, God had crazy plans for a small little kid from North Platte, NE! It’s been a wild ride and feel so blessed He allowed me to do what I loved for so long. But now it’s time to say goodbye to the game I love.”

The 5-foot-8, 204-pound Woodhead had 2,238 yards rushing and 15 touchdowns, along with 300 catches for 2,698 yards and 17 scores while playing for the New York Jets, New England, San Diego and Baltimore. He added an exciting element to the offenses in which he played, able to run the ball through seemingly the smallest of holes or take a short pass and turn it into a long gain.

The 33-year-old Woodhead is also a devout Christian who leaned on his faith during the ups and downs of what became a successful NFL career.

“All I had to do was follow His plans for my life,” Woodhead wrote, “and His plans were crazy awesome!”

Woodhead was a two-time Harlon Hill Trophy winner at Chadron State in Nebraska as the top player in NCAA Division II. Despite his college success, he went undrafted in 2008 and signed with the Jets as a free agent.

In his farewell message, Woodhead thanked God, his wife Stacia — his high school sweetheart — and family.

, his agent Chris Gittings, along with all of his former coaches — singling them out by name — and former high school, college and NFL teammates.

“Without you guys, I never would’ve become who I was as a player,” he wrote. “To all my o-linemen, you guys deserve the credit for anything that I received credit for. I thank you for helping make my career.”

Several former teammates congratulated Woodhead on social media, including Baltimore safety Eric Weddle, who played with him with the Chargers and Ravens, and Ravens free-agent tight end Benjamin Watson.

Added Watson on Twitter : “It was an honor to share the locker room with you last year. Thank you for your consistent witness, courage, and perseverance. Man we had some laughs. Well done brother. Congratulations!”

Woodhead closed by graciously thanking the medical personnel he worked with, as well as team employees and NFL fans.

“You’re the best and have always felt the love and support!” Woodhead wrote. “I’m sure I’ve forgotten a few, but know that I’m thankful for everything everyone has done on my journey.”

The flurry of activity comes as the Jets look to improve on two straight 5-11 seasons and try to end a seven-year playoff drought. Getting a quarterback to build around was a priority entering this offseason — familiar territory for a franchise that mostly has struggled to find sustained success under center since the days of Joe Namath. The Jets have had 30 starting quarterbacks since Broadway Joe’s last game for them in 1976. The last time New York took a quarterback with a high first-round pick was 2009, when it drafted Mark Sanchez. After helping lead the Jets to the AFC championship game his first two seasons, Sanchez mostly struggled, and the likes of Greg McElroy, Geno Smith, Michael Vick, Ryan Fitzpatrick, Bryce Petty and McCown have all started games in the years since.

With this deal, New York has a chance to find its new face of the franchise. But Maccagnan & Co. know there will be big-time pressure on them to make the correct choice at No. 3. The last time the Jets had the third pick was 1981, when they took UCLA running back Freeman McNeil, who made three Pro Bowls during his 12-year NFL career and was inducted into the team’s Ring of Honor.

For the Colts, they now have nine picks overall and appear to be in a rebuilding phase after going 4-12 and missing the playoffs for the third straight year. Getting extra picks from the Jets will surely help, giving Indianapolis four selections in the top 50 in this year’s draft.

The Colts had done very little in free agency — until Saturday. They signed backup defensive end Denico Autry from Oakland to a three-year deal and already have lost two other key players: receiver Donte Moncrief, an occasional starter, and emerging cornerback Rashaan Melvin.

It is widely believed that the Colts were very interested in N.C. State defensive end Bradley Chubb with the No. 3 pick. Indianapolis still might be able to land the promising pass rusher at No. 6, especially if three or more quarterbacks are taken in the first five spots. That is, if the Colts don’t do some more wheeling and dealing before the April 26-28 draft with their plethora of picks.

“We’ll still be open if an opportunity — the right opportunity — presents itself at six to move down,” Ballard said. “But right now, we feel pretty good. It would have to be a pretty attractive offer for us to move away from six because of the player we think we’re going to get.”